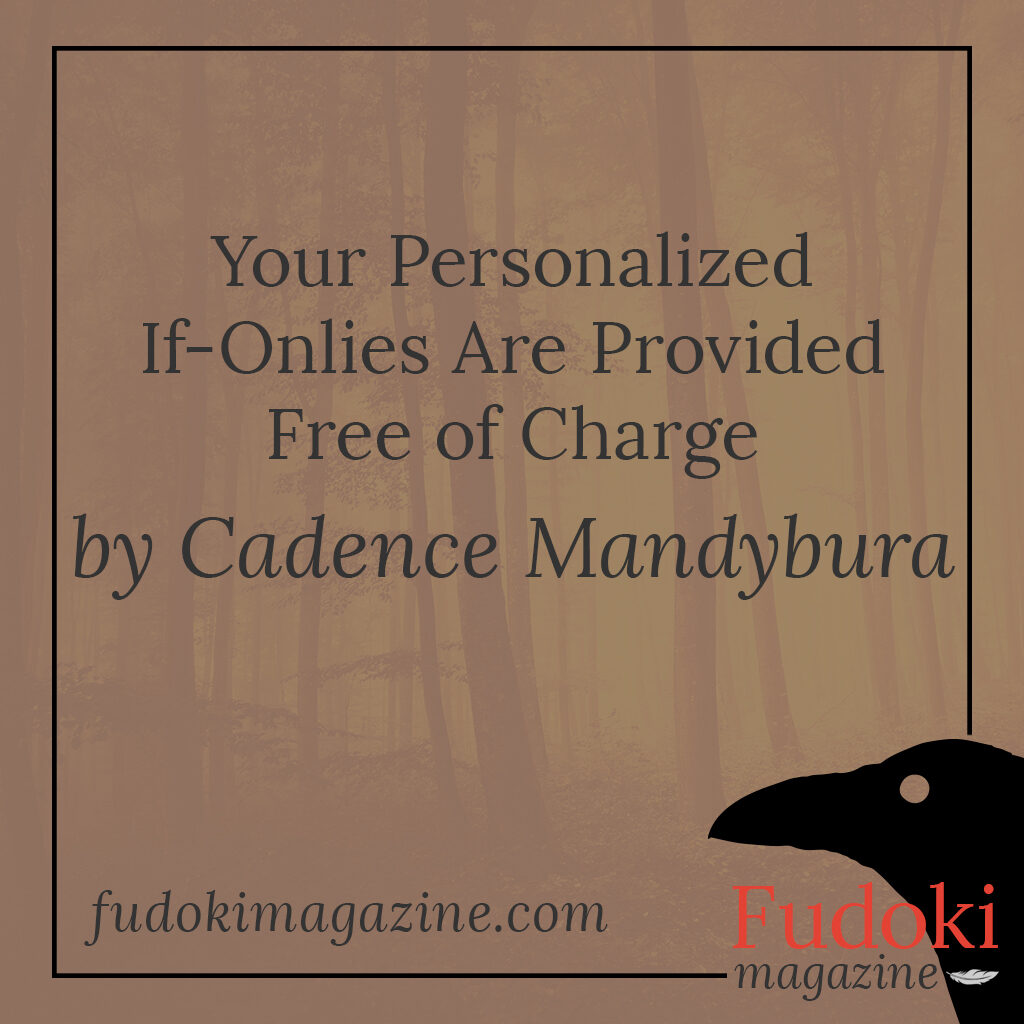 More than anything else, the afterlife resembles a warehouse. You join a stanchioned queue and wait to be served by the angels staffing the counters. The line moves slowly but steadily.

When you’re called up, the angel already has your paperwork in front of him. He scans it, tracing through the information with an opalescent finger, then disappears into the warehouse without a word. He’s gone for a few minutes. It’s quiet here; people are respectful and patient. There is no longer anything to rush for.

The angel returns with a jar filled with floating lights, like tiny, multi-coloured fireflies. He makes some comment on the density or paucity of light—“Was your life a sad one? It may get better now,” “You must have lived with very few regrets.”—but he brisks onward to the business at hand. He hands you a glossy pamphlet as he slides the jar forward across the counter. The pamphlet is only a few pages long, with a standard intro, FAQ, and instructions on how to open the jar’s triple-sealed lid.

Please enjoy your afterlife, the pamphlet concludes. Your personalized if-onlies are provided free of charge. Use with discretion.

You walk away, feeling more or less yourself, the way you always felt on the inside, when life was calm. The afterlife is indefinite and kaleidoscopic: everything seems infinite, borderless. The line of counters and angels stretches to the horizon, and the warehouse shelves behind them are dimly endless. Within a few steps, though, the concrete floor gives way to warm interlocking brick, their seams spongy with thyme.

You are in a cultivated park, with benches, fountains, and flowerbeds. The warehouse is nowhere to be seen. The weather is temperate. Wind drifts through blossoming trees, and the air smells like spring—new leaves, nectar, the memory of rain. There are other people here, just outlines with soft shadows embedded in the setting.

You sit at the first bench you find to examine your jar. If you shake it, the lights inside scintillate in a pleasing motley: some bright, some weak, marble-sized, mote-sized. As the jar sparkles, dreams ripple through you—you shake it again, focusing on a particular blue speck of light. Aha. There. The angel needn’t have given you a pamphlet at all.

Each glowing light was one of the personalized wonders you had carried through life, past death.

If only I hadn’t stayed late.

If only I had been two seconds quicker.

Big and small, plausible and wild, your regrets shine with the possibilities of the paths you did not, or could not, choose. They gleam with the impossible answers to the questions you asked yourself until your dying day.

If only I had invested early.

If only I had been kinder.

This is the opportunity you have in your afterlife.

You can keep your jar sealed, watch your if-onlies swirl, dream all the dreams they afford you. Or you can open the jar, tease one of your if-onlies free, and allow it to transform you.

If only I had confronted him.

If only I had kissed her.

As you contemplate this choice, a woman across from you shakes her own jar. You can’t see her very well: couldn’t say how old she is, how tall, the colour of her skin, hair, or eyes. But you can detect the tears running down her cheeks, a deep hunger as she unlatches the triple-sealed lid. She smiles hopefully as she coaxes a violet light upward through the grating. She tamps down the jar as soon as the spark has escaped, and then cups one palm close to the light, in awe.

If only I had been a boy instead.

If only I had stayed in school.

The bubble glows hotly, soon so bright you have to shield your eyes—and then it’s gone.

Blinking, you focus again on the woman. She glows a fairy purple, but as the light fades, so does her smile. Shock freezes her features—then she drops her face to her hands and weeps. The sound is muffled, far away, and you wonder what unpalatable mystery she had solved.

If only we had used a condom.

If only we had stuck it out.

As you spend time here, you learn. The other are keen to tell you. Don’t let them out, they say. It’s better not knowing. Even when it’s a happier ending, they assure you, you’ll miss wondering.

To distract yourself from the pull of your own jar, you spend your time watching others in the quiet, clouded world. Despite the warnings you’ve heard, many people choose to let one of their questions free, bathe in its incandescence, and emerge changed. Sometimes, they seem genuinely happy; they look healthier, more confident, less damaged. But even those people, when you see them again—hours, or it is lifetimes later—have faded back into uncertainty, toying with the clasps on their jars’ lids.

Some people only have a few lonely lights left in their jars. Those people seem to be the saddest. The happiest you see anyone in this muted world are those with firmly sealed jars, shaking it bright, and smiling as the sparkle tingles inside of them.

If only I had left when I had the chance.

If only I had stayed.

It is, you understand eventually, a perfect system, giving the dead all the lives to last them eternity.

And as the soul who has released the very last of his if-onlies, replete with knowledge, stares desolately at his empty jar—

—there, after a moment, a small spark blooms.

If only I did not know.