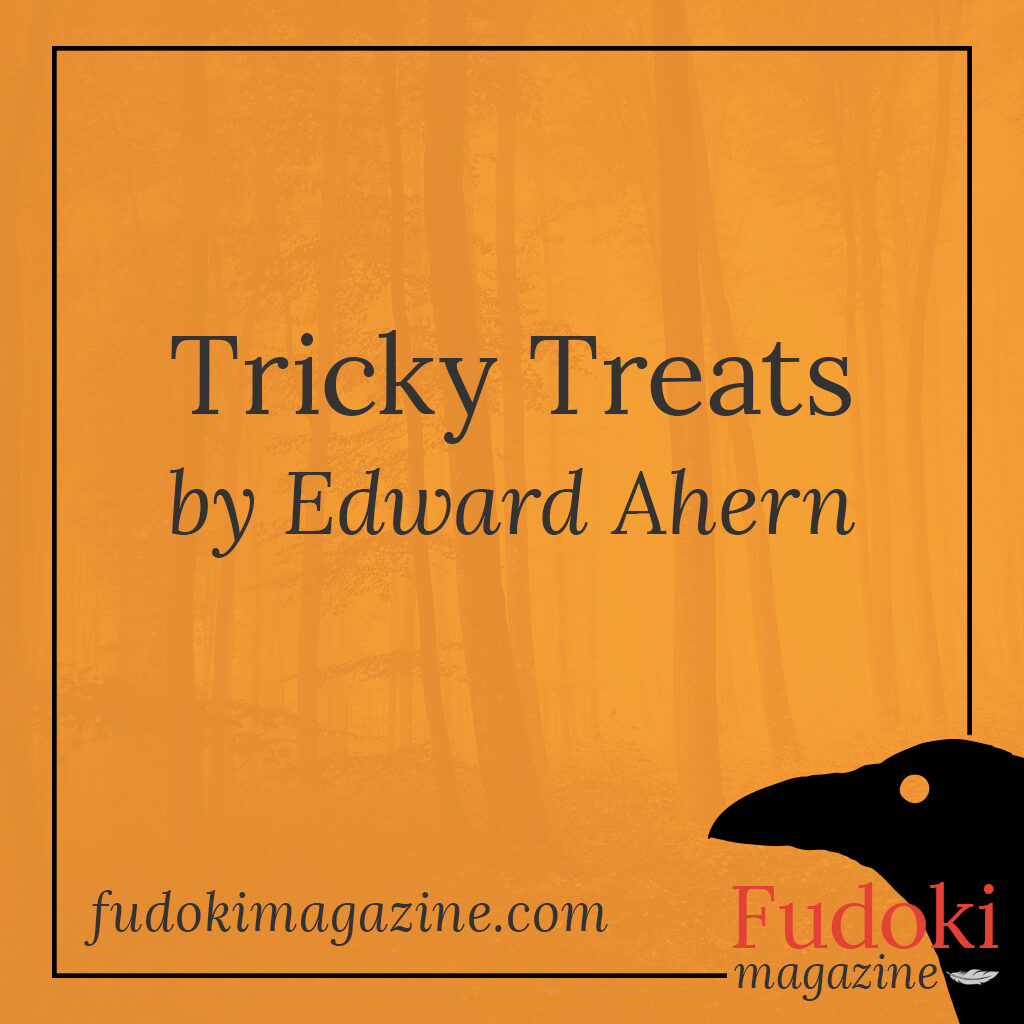 The stand went up the afternoon of Halloween. It perched next to the street in front of an old house. There were two painted signs on the front of the stand. The one higher up read:

There’s a Trick to Our Treats

The one lower down read:

Take one and begone in fun
Take more and troubles begun

The Gobeline couple that had rented the house were really old, and their neighbors, much younger and still breeding children, wondered why they’d moved in. Still, they kept their yard very neat and made no noise.

At dusk, when daylight had all but disappeared, Mr. Gobeline pulled out a big cart filled with sweet things. There were Marzipan animals, and Berliners, and Schneebȁllen and Bienenstick and Bremer Klabe. They were sealed in what looked like factory plastic wraps and were wonderfully delicious looking.

Old Mr. Gobeline, pinch cheeked, pointy nosed and stooped, pulled the empty cart back into the house and left the stand all to itself. Toddlers and tots, whose parents brought them Trick or Treating in late daylight, stopped in front of the stand. The young mothers formed a defensive cordon.

“I don’t recognize these candies.”

But one of the fathers, after pretending to read and understand the German labeling, ripped open the wrap on a Bremer Klabe and gulped it down in four bites. “Absolutely delicious. Tastes like it’s just from the bakery.”

The mothers, realizing this was a perfect excuse to violate their diets, each took a different confection and tried it. “Marvelous.” “No preservatives.” “Not too sweet.” They wanted to take a second one, but there were too many witnesses.

As the evening darkened and latened, the age of the children increased. As did their greed. Older kids sometimes took two sweets rather than one, and several teenagers took three. At nine pm Mr. Gobeline emerged from his house without the cart and walked out to inspect the stand. There was not a single sweet left, just empty wrappers strewn around. He picked up the wrappers, took down the signs, and carried everything back into the house.

Mrs. Gobeline was waiting for him.

“Ja, wunderbar. At least three hundred. The effects will be starting soon. Are you ready?”

“Natürlich. I’ll be so glad to get out of this costume and back to our cave. Let’s go.”

And the Gobelines drove away. An hour and a half later, those who had eaten only one sweet felt only full. Those who had cheated with bienensticks were seized with rank flatulence.

Those who gorged on Bremer Klabe vomited a multi-colored gruel. Overdoing Marzipan lead to violent convulsions. Berliners were time bombs that exploded with diarrhea in the middle of the night. Schneebȁllen produced snot loaded nasal gushes. Five mothers who stole and ate their child’s confection had it worst, suffering from insatiable thirst and incontinent urination.

Texts and phone calls provided supporting music for the ambulance sirens. It was morning before the neighbors decided that the Gobelines’d got them, and broke down their front door. But the only thing of note that they found was just that, a note. It read:

Hope you enjoyed the true spirit of the holiday.