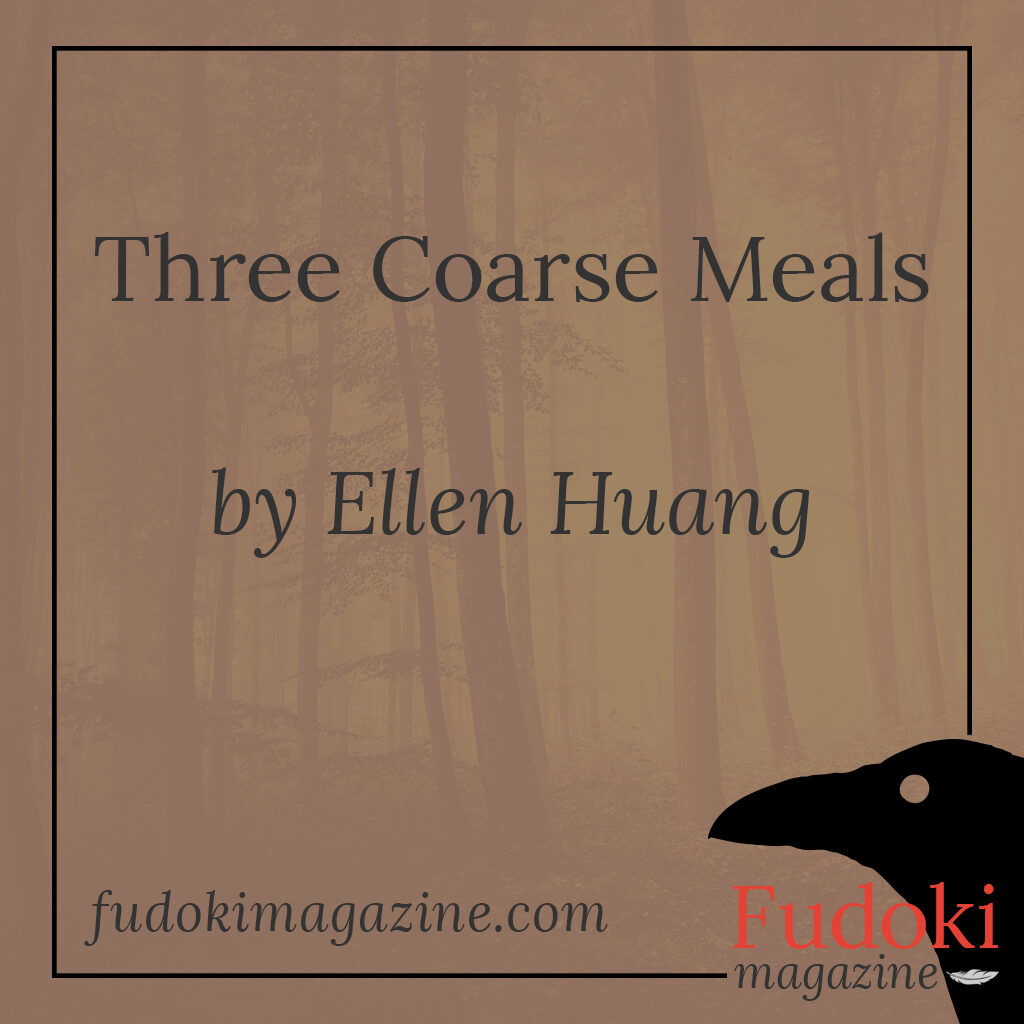 The squinty-eyed troll could feel the thump-thump-thumping of feet on the bridge.  Something like a human boy. In other words, food. The footsteps pitter-pattered faster and faster. Then lighter, as if the boy was barely touching the bridge, preparing for a huge leap.

No way was this free food getting away. The ravenous troll reached up and grabbed.

Suddenly pain shot through the troll’s hand, and he howled. A bite!

The kid caught in its fist yelled: “That was a warning! If you hate pain, don’t eat me! Look at all these scratches on me!”

The troll squinted, dangling its prey closer, upside-down. The kid was pale, with hair that sprung like horns. He was covered in scratches, as if he had never healed in his life. Yet he moved as if perfectly healthy.

“See?” said the kid with hair like horns. “I’d be a rough meal, and you’d get a bellyache.”

Well, that didn’t sound terribly good. But the troll had scratched up its meals before. No big deal.

“And I’ve been dead before!”

Dead? The troll’s squinty eyes widened. This little snack had been dead? Eating things alive and screaming was all fine and dandy, but something that was once rotting and still moving?

“And I’m missing a part of me. Look!” The boy wriggled his arm free from the troll’s grip and waved a bony hand back and forth. The troll’s head followed the hand movements back and forth until it was dizzy and enraged.

The kid pushed his widespread palm up toward the troll’s face. “Look! Only four fingers! Most people have five!”

Again, the troll grunted, slightly cheated that its prey was missing a part.

“My middle finger turned to ash on a sunny day,” said the horned kid apologetically, sighing. “But, if you wait, my twin brother will be here soon, and he’s the living one, full of  blood. And if you get in a fight with him, it’s only better, because then he’ll start changing shape, and you’ll get even more meat to eat.”

More meat, huh? The troll opened its fist and sat to ponder this. The more it imagined the  taste of the possibly bigger and better, the more its mouth watered. Lost in reverie, it didn’t see the horned boy slip away.

Soon, it could feel thump-thump-thumping on the bridge again. The thumping came faster than before, as if this new creature came on four legs.

Along on fours came another boy. His feet bent and moved like a canine. This boy’s hair fell closer to his eyes—but it was the same earthy hair like the one before. His face was smooth as an egg, but held the same paleness, same eyes, same nose, some mouth. It was like getting a cleaner version of what escaped. And if this food fought back, even better.

The troll stomped down to catch him, and the kid dodged, turned, and bit the troll’s ankle.

Growling, the troll snatched him and dangled him by his scruff.

“Wait,” said the canine kid. “You don’t want me. I’ll change back, turn too small in your mouth, and you’ll feel cheated. And I’ve never lost much blood, so there’s nothing newly made.”

The troll was lifting the kid above its mouth when it heard this and paused to think. Too small? Small was bad. Nothing newly made? But plenty of young, tender meat hadn’t had much time to make new blood. No big deal.

Again, the troll froze with its mouth open. Drool escaped past its stony grey teeth as its jaw hung awkwardly.

“You don’t see it, but I have all these scars inside of me. Inside or outside, it all ends up the same after you chew and digest. It’ll make you sick. You don’t want that. Noooo sir. What you want is my sister who’ll come after me.”

The troll paused, sitting down (and shaking the bridge as it fell back) to consider. Was inside and outside all the same? Were scars on the inside just as bad as those on the outside?

“My sister,” said the canine kid, “is all kinds of fish. If you get into a fight with her, she’ll turn into a seafood buffet. She’s too proud to change back before a fight’s done. She has no scars, and she can change herself to feed an army. Lots of bones to chew on, too.”

A seafood buffet! Much better than risking being sick. As the troll daydreamed this, the canine boy dropped and ran, slipping and sliding on monstrous drool, down the bridge.

Soon, the troll could feel something climb on the bridge again. It didn’t thump so much as slither, closer, and closer. The troll’s mouth watered enough to flood the bridge.

At last there was the third kid. The last two had looked alike, but she looked completely different, as if she were born of something else entirely. Her eyes, her nose, her hair, her skin were all different colors. Could kids so different be the same family? But no matter. She could change shape into anything without hesitation. Maybe mutate into a soft shell combination. Maybe even split herself into a thousand fishes.

Slithering closer and closer, the third kid was getting bigger and bigger. Her serpentine form wrapped itself like a ribbon over the entire bridge, her neck elongating. The sweet possibility of leftovers! If the troll could patiently wait for her to reach her limit. A lifetime of devouring children, and this was the best one yet!

Then she unhinged her jaw, and that stretched beyond belief. The troll waited, hypnotized, until she’d grow big enough to satisfy…

The bridge shook as the serpent kid belched.

After a meal like that, she owed them dessert.

First published by The Folks

One thought on
“Three Coarse Meals”