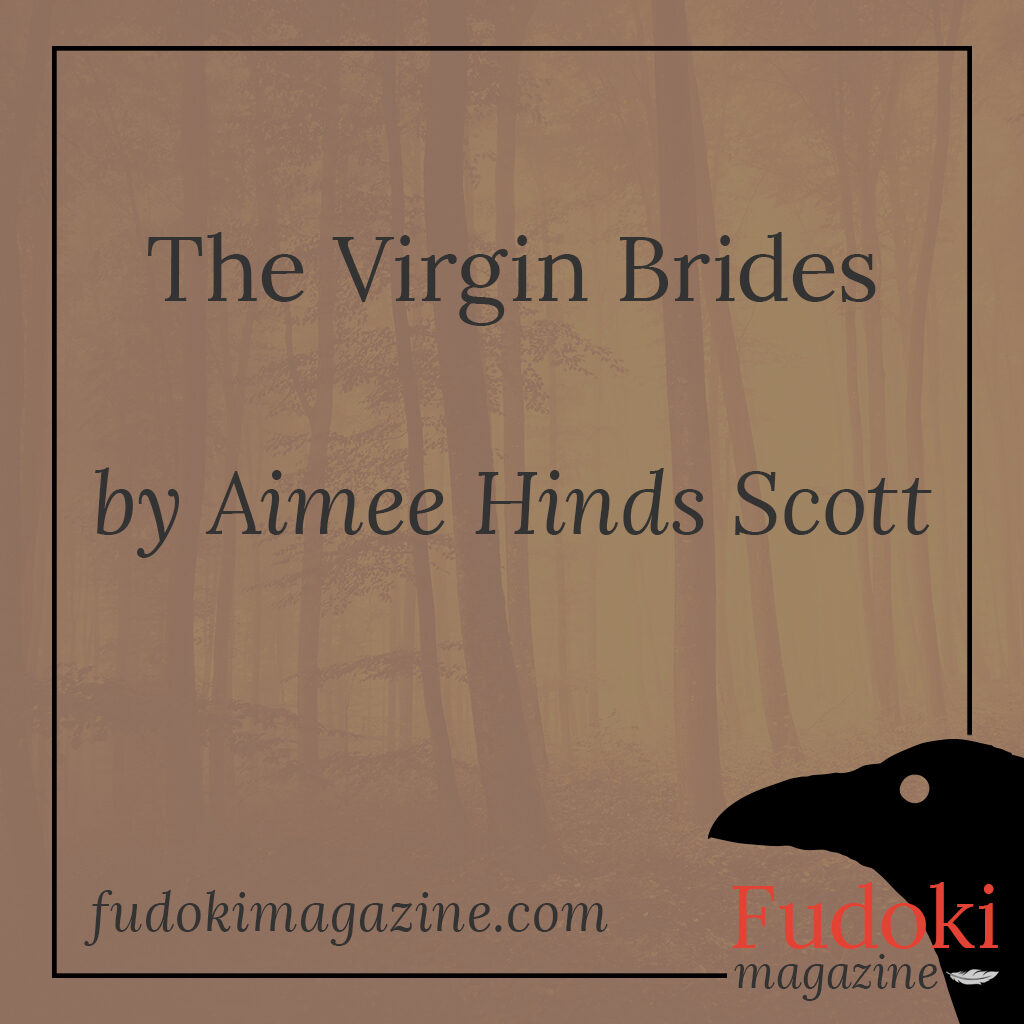 I remember the first time I saw her.

I was, I have to admit, jealous. There is little special about being dead, and I had become proud of my unusual position, the virgin wife. I am ashamed to say that I had become accustomed to sneering at those poor girls buried as brides of the Unseen One, some of whom spent their endless days hovering around his palace, hoping to supplant his queen. No hopeless waiting for me: my groom joined me after ten years, both a blink and an eternity down here where time means nothing. My groom is unhappy in death; even now, he has not learnt to be grateful for the gifts he has been allowed to bear into this realm – his lover warms our nuptial bed, fulfilling the role snatched from me by my father’s hand in the name of war. Our time as husband and wife was marked from the beginning by his lover’s presence.

So – when I saw her, staggering down the hill towards our house on the banks of Oceanus, her still-livid wound the mirror of my own, I was jealous. There was no room in our marriage for another, especially not one whose status matched my own. A novelty, the shades whispered her name to each other as she shambled through them. Polyxena, they sighed, Polyxena, Polyxena. Ten years ago, it had been my name slipping though ghostly lips, my name echoing around the halls of Hades. Her name, I knew already. I had praised it once, not so long ago, while my husband cursed it, for she had a hand in his downfall, spilling the secret of that single, delicate spot on his left ankle to her murderous brothers. Polyxena’s betrayal had signalled an end to my temporary loneliness, and now she was here to further crowd my house.

I stood outside and watched her come, unsteady on her feet. When I came here I had much more poise, I thought spitefully. The truth was that I had to wait in the Asphodel Meadows, my own small resistant death not heroic enough to admit me to the Elysian Fields on my own merits. I came when he did: I was summoned to my husband’s side when he finally died. So great was his reputation, Hermes himself came to fetch me, joining my hands at long last with those of the formerly swift-footed Achilles, greatest of the Achaeans. Like this – fingers enmeshed, I with head dipped demurely like a living bride – we made our way to our house, where, of course, Patroclus waited.

Watching Polyxena now, remembering my own arrival, I clung to my dignity. The memory of that moment – Achilles pushing open our door, Patroclus stepping into view, their joyful reunion while I am left alone in the hall – almost drives me to Lethe. But my hidden fury required memory. I wanted, above all, to recognise my father when he came. And come to this place I knew he would, a hero who would even sacrifice his own daughter for honour, fame, and glory. This is no place for prayers, but I did so anyway, that Agamemnon would suffer as ignoble death as he dealt to me.

Polyxena was almost here. Seeing her up close – her youth, the blood staining her dress silvery in the half-light, the uncoordinated limbs that had not adjusted to death – I softened. In that moment I saw her anew: we were the same, she and I. She would become another insipid bride haunting the house of Achilles. I opened my arms to her, and she shuffled into them. Later we talked, but then, I held her as we stood together motionless, no need for words, or for breath.

I took her by the hand and led her into the house. She sat down at the long table, placed her hands in her lap and stared at the wall. This is how she remained, silent, for a week that stretched into aeons. Or that’s how it felt, sitting beside her still figure as the heroes feasted around us at the turn of every timeless day. At the end of her vigil, she stirred. I noticed her hands first, twitching in her lap, fingers reaching up to touch her wound, to confirm the awful reality. Eventually, her head, turning towards me, and speaking just one word, a supplication, my name.

After this, I did not leave her side.

Polyxena, Polyxena. Her name barely left my lips, and mine, hers. The brutal gash that killed her faded to an argent sliver across her throat, our corresponding collars of ownership; to our husband, once, and now to each other. Achilles had not found a use for one wife, so he did not notice the scant presence of the second. This to my delight; we play wife to one another. Achilles’ actions brought us both to Elysium, but I felt that she was my own prize, and I hers. We spend eternities in conversation, and infinities in mutual pleasure, neatly snipping our disinterested husband out of our fate.

Up above, the living world moves on. She doused my anger, and I barely noticed when my father died, killed by my mother, who was then killed by my brother, who then killed the son of our husband. Polyxena’s mother died. A small neighbourhood appeared around our house, filled with the shades of our kin, who we would have time for later, later. Down here, unbound by corporeality and unravelling tradition and rules, we find happiness together, each of us a bright reflection of the other. In death, we grasp the love denied in life.

I kiss my wife. Our husband and his lover become pale shades haunting the house of Iphigenia.