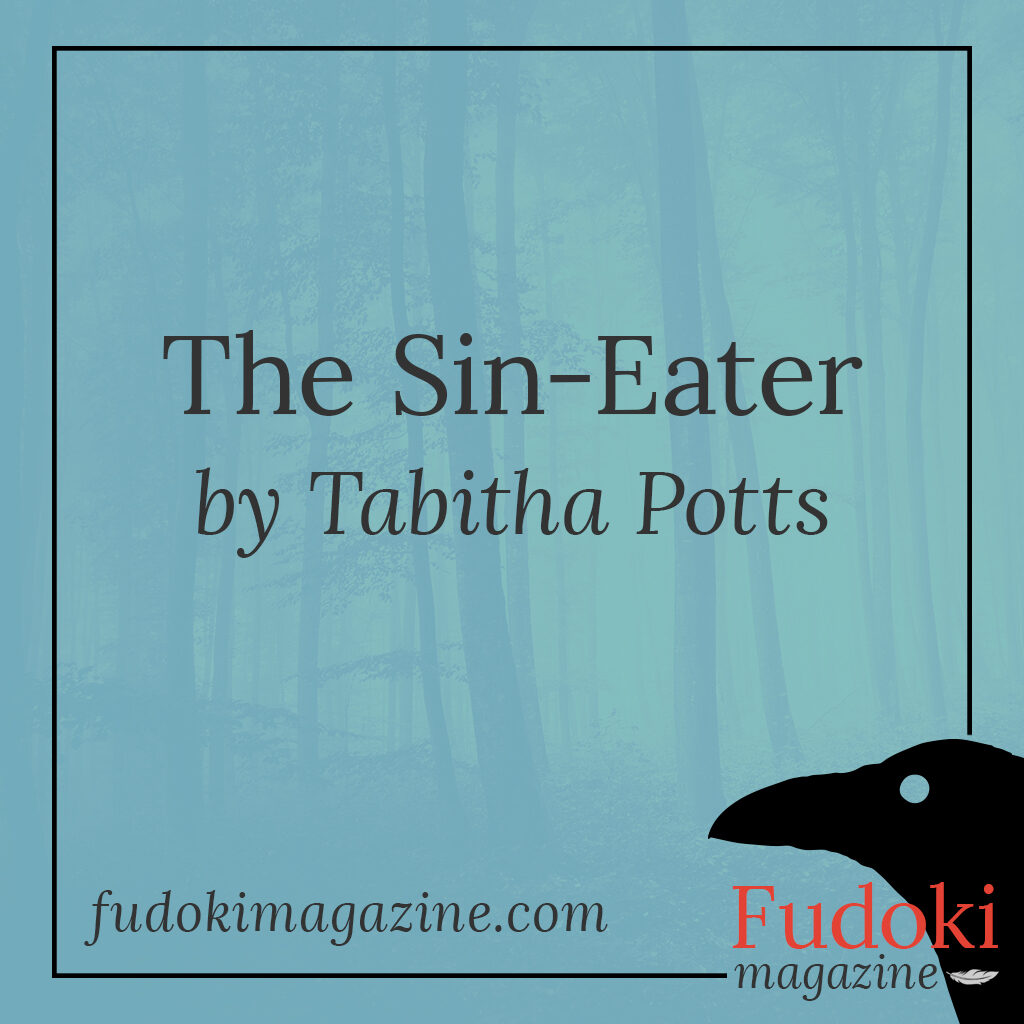 The Sin Eater crawled on her hands and knees, as she had been bid, towards the catafalque. The huge state-room, richly decorated, was empty, for no one is allowed to witness this private ceremony. She had been woken early this morning at the Relicts encampment outside the city walls, pulled from her bed of rags by two guards armed with spears. Later, she’d been brought to the Palace, washed and deloused, her filthy, reeking clothes replaced with others that were clean and warm. The only dirt that would be on her today would be the spots she absorbed into her soul.

Slowly, reverently, she raised her eyes. The body lay resplendent in a golden coffin, the skin still iridescent with a mixture of colours – blue and green predominantly – that showed he must have died suddenly, unexpectedly. They were not the colours of fear. His rippling dark green hair flowed across the red lining of the coffin. He was young – he was no older than thirty, she thought. But the Sin Eater knew that she would be feasting tonight. For he was rich, and the rich have so much more opportunity to sin.

The body was dressed in a silken shroud, and at various points along its length lay various dishes of gold and silver. She could only recognise a few of the dishes, the Aliash fruit, orange with a high-pitched sound, she had once tasted when it fell out of a carriage into the mud and she had snatched it up. She reached for this dish first and took the first bite.

The sensation of the fruit – the citrus of the orange and the resonant, high note – melded with something else. She was in bed with a young woman, both their skin glowing red with a deep, mellow bass note, the same rich colour as the velvet drapes around her. Like all those in her class, even before she left the breeding age behind her and was sent to live with the other Relicts, the Sin Eater was forbidden to ever allow her skin to change from leaden grey.

Of course she could still taste the glory of a saffron sunset, or a purple violin, but she could never respond, and so her senses had slowly become dulled. The experience of revelling in it, allowing her skin to change colour and create her own sound, just as the young woman in the Lord’s memories was doing, was so powerful that the Sin Eater could only enjoy it, even as she took note of the fear in the young woman’s eyes and remembered seeing her head displayed on a pike five years ago as she was begging outside the Palace walls. Who was she again, the twelfth, the thirteenth wife? She could no longer remember. She reached out a gentle hand to brush away a tear from the young woman’s cheek.

Without being conscious of it, she had eaten all the Aliash fruit, stuffing it into her mouth rind and all and allowing the sticky juice to drip from her lips and chin. Her stomach, unaccustomed to such a quantity of food, gurgled and the sound echoed in the silent chamber. She reached out for another dish, this time, a silver platter containing some kind of sweet-meats in a pastry that was decorated to look like gilded birds in flight – an extravagance of the Palace chef and one of the Lord’s favourite dishes as a boy.

It must be a childhood memory, for the hands in front of her are those of a child, but they are holding something – choking its life away. It’s a puppy, probably a pet of the other child, a younger boy, who stands opposite her, crying and screaming. Part of the Sin Eater is alive to the horror, and yet over the years she has seen so many worse things, first as an Outcast and later as a Relict, that she is distracted. She is standing in the Palace garden, and the flowers and greenery all around her, and the sound of the fountain at play, seem to be singing, creating a symphony of light. Her hands open and the little dog falls to the ground, the other child snatches it up and runs away. The green and gold melt into her, like fire. Every cell of her body is singing.

‘His skin has lost all its colour’, commented one of the courtiers to another. ‘It’s grey, like’ – ‘An outcast’, interrupted the other man, pointing at the Sin Eater’s body which lay stretched out at the foot of the catafalque, surrounded by empty plates. ‘Look at her – we’d better get rid of that fast. Call some servants. And call the court painters. We’ll have to gild the bastard’.

Two men came in, placed the Sin Eater’s body on a bier and covered it with a dark cloth. They walked together through the city, everyone drawing back and averting their eyes, until they had passed outside the City walls. Finally, they reached their destination, and lowered the body to the ground without ceremony. It had been a long, hot walk.

One of the gravediggers lifted the cloth and looked at the body. It glowed. He touched the Sin Eater’s skin with his finger, and the colours ran into him, full of music and light.

‘So many colours on her skin – I’ve never seen anything like it. Even though she’s an Outcast, she looks… beautiful’.

‘You think?’ grunted the other man. He reached out his foot and kicked the Sin Eater’s corpse, still smiling, into the Pit.