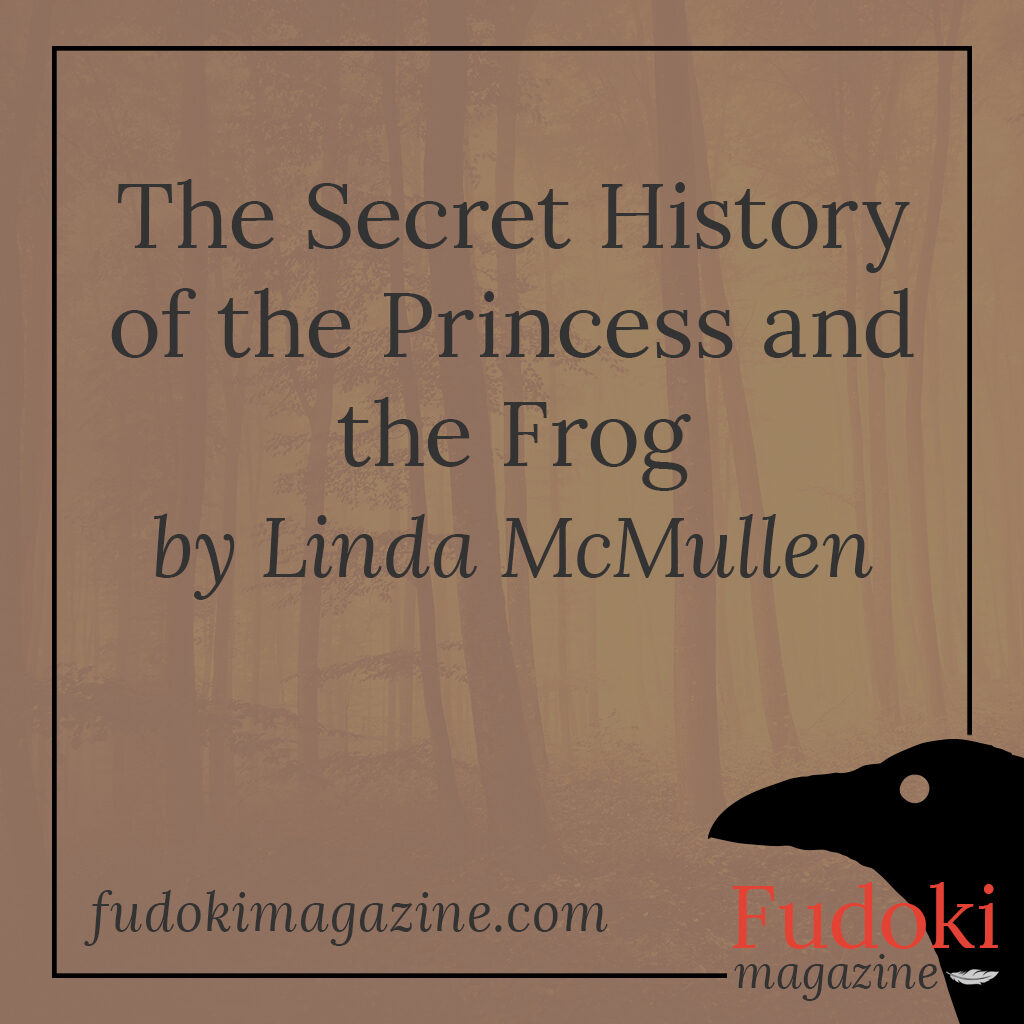 He offered one small favor – he retrieved my ball – and I’m bound for life.  I’m obligated to share my food, my chair…

I’ve sinned against mankind.  My meager life is forfeit, weighing but little against the gravity of that crime which inevitably bears the feminine imprint, from Eve down to me:

“Are you happy?” he asks me now, amphibious eyes burning.

“Very,” I reply demurely, beneath my veil.

I threw him against the wall once, and I’d do it again.

Did I have options?  Father offered me the choice of marrying a bulging-eyed, recently un-cursed “prince” – or a wimple.  I’m compromised, he says.  The entire court heard that I’d agreed to let him sleep on my pillow.  So: here I am, at the altar.  Over a barrel.  Under obligation.  But between my unwilling promises to love and honor him, before I can even contemplate cherishing this extortionate monster, the cathedral trembles from its bell tower to its foundations…

…and a glorious, wise woman arises from her own ashes.

“I’m so sorry,” she announces to the assembly generally and – dare I hope? – me in particular.  “He’s a tale-jumper.”

“He never belonged in your story at all,” she continues.  “He was the little brother incapable of listening to his saner sister – and so was transformed into a deer after drinking from the wrong river.”

“I beg your pardon,” I say, “but I encountered him first as a frog.”

“You wouldn’t have to beg, if you’d let me finish.  As I say, his sister received the family’s allotment of brains.  She became Queen.  You’d think Herbert here would have felt satisfied with regaining his human form, but no… nothing would please him but trying to surpass his sister with an even greater tale.  He posed as a priest, collecting tithes and passing the time with millers’ wives… I turned him into a wolf for punishment, but then he went about threatening this daft young thing visiting her grandmother… Anyway, I changed him into a frog, never dreaming –”

The wise woman ignores him.

“I apologize,” she says, to me.  “Our kind –” she gestures toward her wings – “do not intervene unless necessity beckons.”  She frowns at Herbert.  “I’ll give you a starring role, young man.”  She marches him out of the church (the rest of us following) into the poor part of the town.  She recites an incantation that cuts his wedding clothes off him, waves her wand, and then –

“Here’s my gift to you, child,” she says, striking my father dumb with a wave of her wand.  “I’m going to let you write your own.”