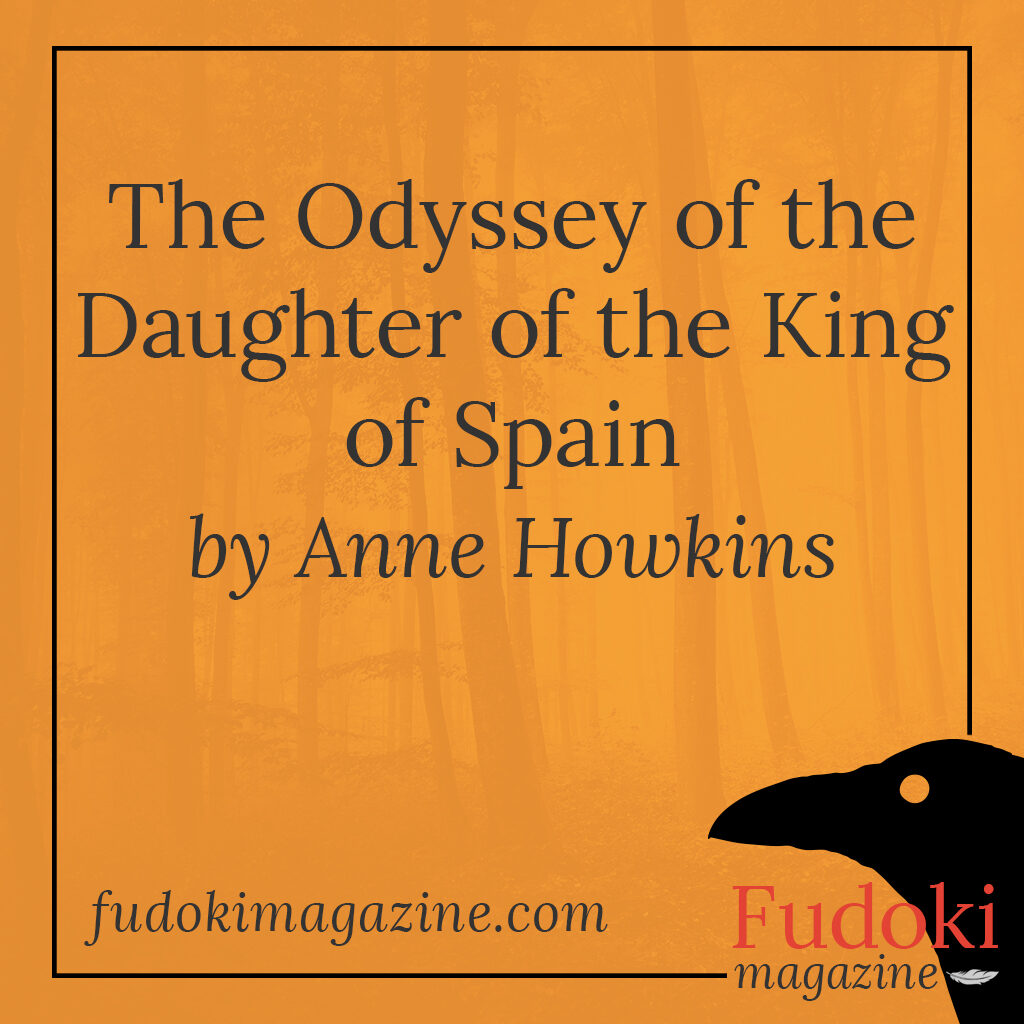 Miles I’ve travelled along the way. Sailed oceans, trekked deserts, scaled crags. Leapt ravines so deep, their rivers are nought but the silver threads I keep coiled in my pocket, ready to hang my prize. To set it at my dusky throat, scenting the air with spice so sweet, it will send lovers sobbing with remorse for sins they have yet to commit.

Citadels I’ve stormed along the way, fortresses rich with rubies as cherry red as you please. Great armies I’ve fought, suffering wounds to set the physicians’ heads shaking in dread. Ebony ravens peck at my gory wake. I weave their cast-off feathers into my hair, amongst the jet and coal my mother, the Queen, tenderly braided into childhood’s dark ringlets.

Lovers I’ve left along the way. Left their lusty desires desolate, spoiled. Plucked black hearts from silken sleeves to dangle at my waist, staining that once pristine gown crimson – all that blood mingling with mine, dripping from my unravelling hems.

Years I’ve waited, years waiting, wishing, praying for the scent of Spain on the air. Marking each rise and fall of the golden sun, each wax and wane of the silvery moon, until the daughter of a Spanish king will find my treasure.

Pears I’ve grown in these years waiting for the scent of Spain. Pears with names soon to be forgotten. Rousselet, Sanguinole, Sharpe’s Academic, Seckle, Puddleduck. Trees planted when my father was nought but a pip sprouting inside grandmother, trees to be the family fortune. Green, yellow, orange, brown, speckled – pears so honey sweet, merchants rode their horses into the ground to be first at my gate.

Death I’ve seen in these years waiting for the scent of Spain. Canker, rot, blight, rust – took them all. Father, mother, trees, until all that remained was a cemetery of fragments that might have been trunks, crucifixes or gravestones. No help for it, not apothecary’s cure-all spice, a nugget exchanged for the last silver in my coffer, not priest’s swung censer, breathing reeking smoke over the bodies, no help at all.

Tree I’ve become, in these years waiting for the scent of Spain. My feet stretching to delve amongst the dead roots, letting worms and centipedes wriggle through naked toes. My ringed bones anchored deep in dark earth, bending in compliance with the north-easterly gales. Bark nut brown, canker-pitted, fingers so green the aphids sip from my pores. Tree, bearing but a single fruit and a single nut, waiting for the daughter of the King of Spain.

Harbinger of the daughter of the King of Spain, the south-westerly wind arrives in spring as a warm stench, riddled with loss and decay. It tickles the green fingers of a small tree standing in a meadow of grasses, scarlet poppies and cornflowers as blue as the eyes of an orchardman. The tree leans crooked after years of yielding to the biting north-easterly wind, which portends nothing but the sting of sleet and horizontal rain. From a certain angle, when the winter sun is low in the sky, a passer-by might mistake the tree for a man, with outstretched arms each holding something precious, his head bowing to the south west.

Daughter of the King of Spain, she stands at a broken-hipped gate, her bones aching with regret for the years wasted on her quest. The years of victory scalps, wild-eyed lovers, treasures and trinkets, all pulling her off course, none worth their cost. She is hollow as a cavern, dry as a desert, old as the stars. No tears to wash away the remorse etched into her face, a face once pursued by a thousand lovers. She hobbles towards a solitary twisted tree, her faded scarlet skirt trailing through the grass like a stinking bridal train, raising bluebottles to confetti around hair as dark as the hell she’s seen along the way.

The leaves of a small tree flutter its greeting to the haggard limping daughter of the King of Spain. A gust of warm Spanish air sets its branches shaking, inviting the embrace of a long-lost lover. A golden-rusted pear and a nutmeg, silver dusty with mildew, quiver in expectation as her filthy clawed hand reaches out to pluck her spoils…

In an orchard, somewhere in England, although few know where, it is said there are trees which bear the sweetest pears a man could ever imagine. One taste of the luscious flesh will captivate him, will make sing that a king’s daughter will be wooed with nothing more than a golden pear and the promise of some Eastern spice.