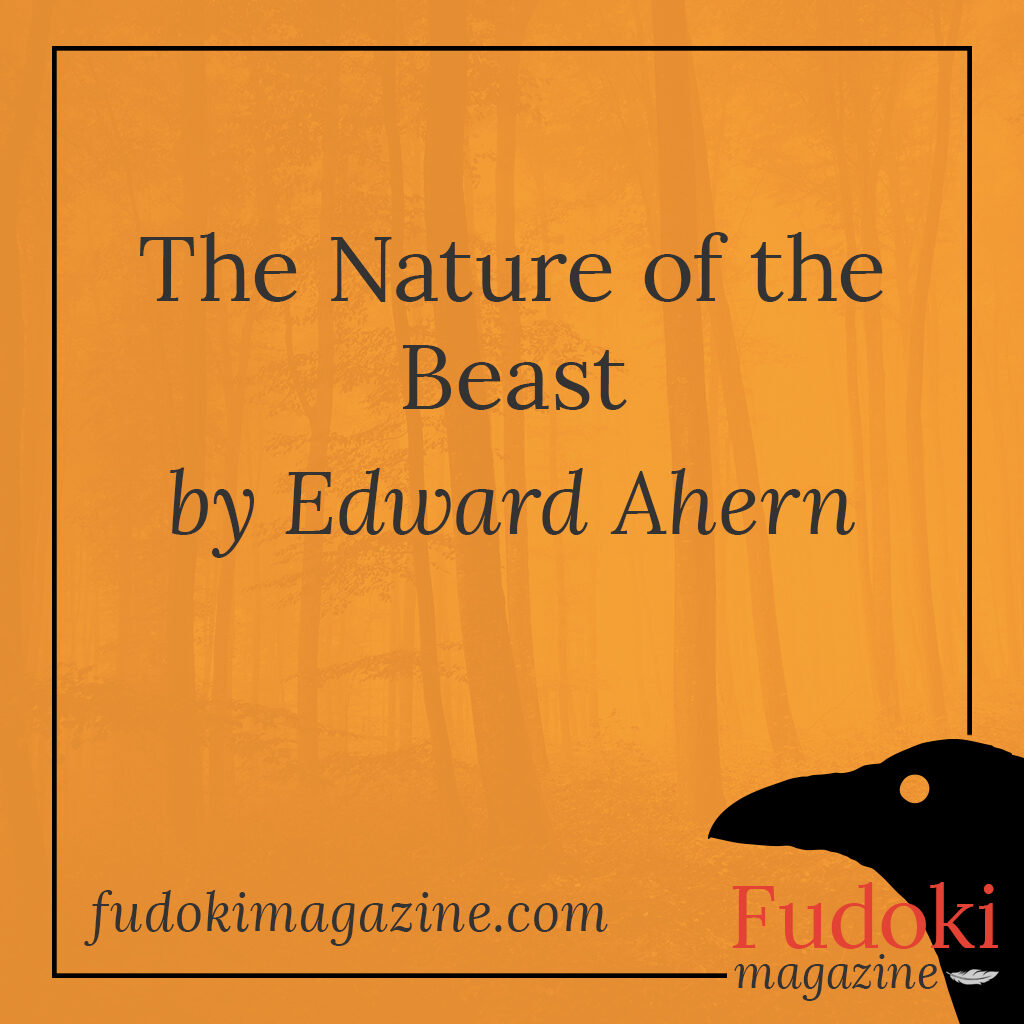 The beast always ate him. George would stumble through the nighttime woods, thorns ripping at his skin, and without looking back would dream-see it bounding toward him. It was unlike any animal George knew—four legged, with clawed fingers rather than paws, a short, sharp-toothed snout, and a gray-black pelt. Twice his size. And somehow handsome.

It harried George like a sheep dog would, forcing him one way, then another. When George broke off to one side it would pounce and bite into his neck, almost ripping off his head. George felt hot, dry breath every time he died, shrieking in pain. George would then have to watch as the beast devoured him, Flesh, clothes and bones, all went into its maw.

He’d wake up screaming, clutching at his throat, and bathed in dank sweat. And poor Heather, undergoing cancer treatment they couldn’t afford, would try to console him. After three consecutive nights of the same nightmare, his days were spent shaking and barely able to think, George started writing notes as soon as he came to. After his fifth dream death, George realized that he was always herded in the same direction, deeper into the woods, and that he could run further before dying if he kept to the way the beast was steering him.

That next night, before his getting devoured, he allowed himself to be steered to a cave opening at the end of a gully. He crawled in just before the beast could bite his feet, and pivoted to face his next death. But the beast settled on its haunches. A voice came from behind him.

“You really are a slow learner.”

George spun around. A bulbous little figure sat on the cave floor, self-illuminated in a dim, hard blue light. “What’s happening to me?” George yelled.

“You’re still dreaming. Try and climb on top of your fear while we talk.”

George squinted his eyes. Its face was- foxy? Certainly not human. “Can you protect me from that thing?”

“That thing is made in the likeness you gave it. If you’d been more twisted it could have been a vicious neighbor. Either way, it shepherded you to me.”

The figure shrugged, blue light flickering. It had a pungent aroma, and George couldn’t recall smelling anything in a dream. “Please focus on me. I have a quest for you, George.”

The fox being sighed. “What you really are has been buried and needs disinterring. Think back to your childhood fantasies about battles and honor. That’s who you want to be, and why your life seems to be an endless wait at an abandoned bus stop.

George’s breathing had slowed to soft pants. “Look, ah, what should I call you?”

“Mr. Eltherel, I’m no hero, never even served in the military. You need a better candidate.”

Eltherel waved a paw-like hand as snorts from the beast reverberated into the cave. “Now that you’ve reached me, George, these nightmares will cease. But your stultifying daymare will continue.  Wouldn’t you rather dare for fulfillment and great reward?”

Even in dream miasma, George tried to negotiate. “What’s the quest?”

“One of our kind has gone rogue, killing several of my kind and yours. It sadly must be put down. If you can accomplish that, you’ll be provided with a very large pot of gold.”

“You could be for the right cause, you just haven’t had a chance to demonstrate it.”

“What’s your pot of gold worth?”

“About four hundred twenty thousand of your dollars.”

George frowned. “But it’ll kill me instead.”

“Perhaps, but if you really die, your next of kin gets the gold.”

The round little figure quivered as it shrugged. “Let’s just call it a negative incentive. If you succeed this time there could be other quests with even bigger rewards and honor. Haven’t you always wanted to do more than balance numbers?”

“That’s just wrong. What are you?”

The being smiled wryly. “Not every fairy sits on a toadstool or dances around a fire. Some of us have to take responsibility for things.”

“We can’t, George, there’s a covenant that prevents us from harming each other. Disposal of other beings is a human nature.”

“What are my chances of success?”

“Reasonable, perhaps seventy percent. We’ll provide training in your sleep, but you’ll have to face the renegade while awake, so real death is a possibility.

George frowned. “How would my wife get the gold?”

“It could be cash, gem stones, bearer bonds, whatever she’d be comfortable getting.”

George sighed. “Seven out of ten. Crummy odds.” He glanced back outside. The beast looked almost placid. Childhood memories swirled—of running on the roof of his house, of always taking on a fight, but also of being harshly disciplined until he learned to closet his nature. Urges stirred within him, pushing to be rebirthed.

What was worse, he wondered, than watching his wife suffer in poverty? He pushed concerns about his sanity aside. “All right, I’ll do it.”

“Excellent. Just excellent. Secrecy of course is required, and telling anyone else would only make you seem insane. If you succeed, we could provide other quests which will further enhance your essence.”

“How can this monster you want me to kill exist in my world, Eltherel? He’d be trapped and caged.”

Eltherel smiled sadly. His teeth were crooked and mossy. “You’ve already noticed that some people seem to you to be unfeeling and one dimensional, as if they weren’t human? They sometimes aren’t. We do have feelings, just not human ones.”

“I guess I understand.” George paused. “Is the beast outside really my creation?”

“All yours. And you’re beginning to recognize that its nature is a reflection of what you want to be. Welcome back.”