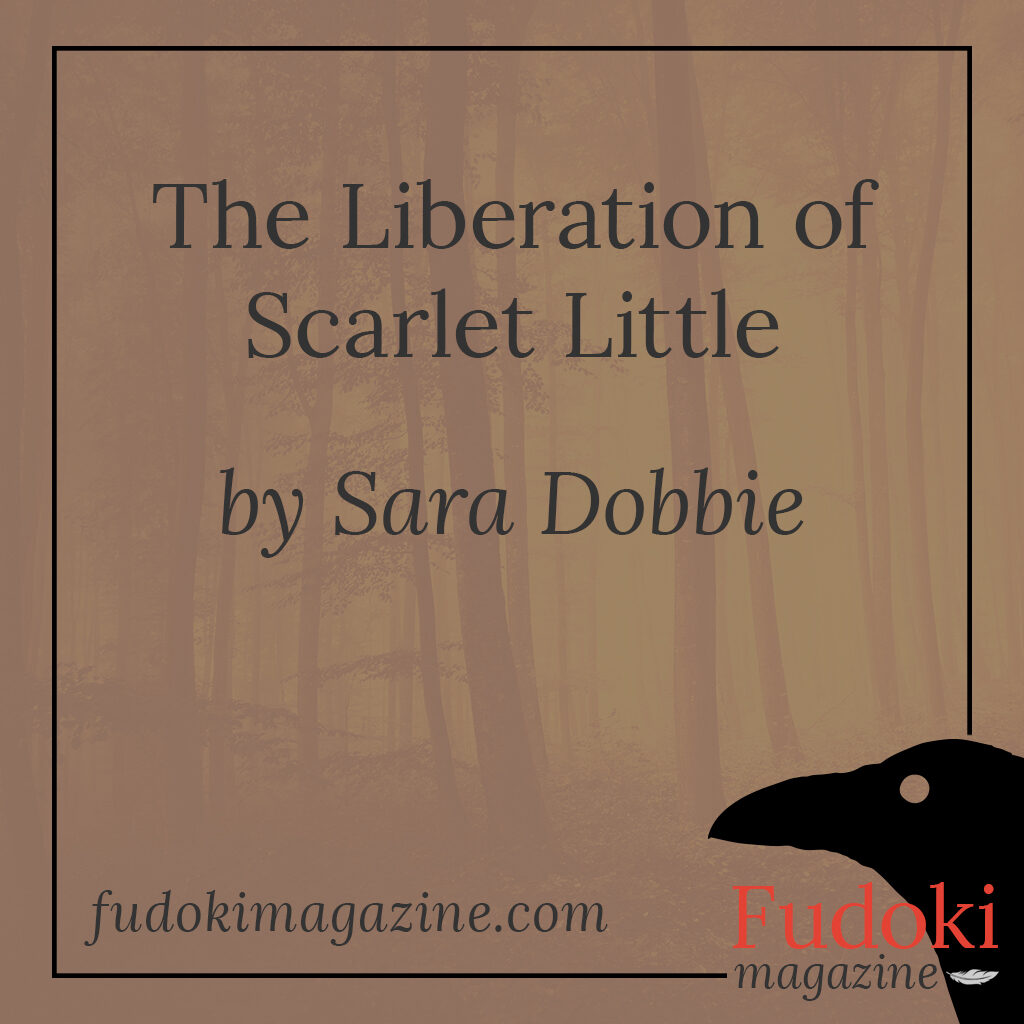 Grandmother used to say that someday all girls must leave home and move to a big city, for one reason or another. Scarlet can still hear her voice, her dire warnings. And now sure enough, she finds herself dazzled by glass and steel, by crowds of faces. Thankful for the sense of invisibility in this new world, yet longing for the green fields of home. And so she sets off in search of some reprieve from this endless concrete. After a time, she comes upon the entrance to a lovely park, and wanders inside to explore its inviting pathways. How many times has Grandmother warned her never to walk alone in such places? The weight of the pebbles in her pockets, though, reassures her. She drops one every few feet, as markers to guide her back the way she came.

Deep within the forested center of the park she comes upon a clearing in the trees, where wildflowers bloom. Delighted with their beauty, she sits down among the blossoms to inhale their fresh scents, to admire the insects they draw in. A deep voice startles her, and she looks up to see a handsome young man with a concerned expression.

“Are you all right, miss? It’s not safe to linger here all by yourself.”

“Nonetheless, will you consent to walk with me?”

Charmed by his kind smile, she concedes. He offers a hand to help her up, and leads her deeper into the park.

“Shouldn’t we go the other way?” she asks him.

“It’s much safer in this direction,” he says, “trust me.”

Though a thrill courses through her from the light brush of his hand against her own, she slips the other hand inside her pocket, just in case. Clutches one of the pebbles, lets it fall on the path behind her. They exchange a few pleasantries, and then he begins to ask questions.

“And what, pray tell, are you doing here in the big city?”

Scarlet has been forced into hiding because certain people want her dead. Poisoned fruit has been slipped onto her breakfast tray, and once, a hunter followed her with a crossbow. She reveals none of this to Wolf, stating simply that the city is exciting, but the park reminds her of a place she misses.

Before long they near a small hut made of stone. Wolf turns around to face her, spreads his arms in a sign of welcome. “This is my place.” A quaint bistro table with two chairs stands nestled beside his front door. “Won’t you have a seat while I get us a couple of drinks?”

Now, Scarlet knows not to take food or beverages of any kind from strangers, but Wolf appears to be a perfect gentleman. Since she is, in fact, thirsty, she accepts his polite offer of refreshment.

He returns with two martini glasses, gracious, hospitable. She raises the glass to her lips, takes a sip. Wolf takes a step closer, and she does not stop him when he leans forward. He smells good, looks good, feels good, and so she lets him kiss her. His hands run down her arms, encircle her, but soon his grip tightens. Something is wrong. Scarlet becomes fearful, for she knows this is not true loves kiss, this kiss is too hungry, this kiss is devouring. She struggles to pull away and sees Wolf’s grin widen, and she begins to sway. Her vision becomes blurred and she feels herself shrinking. She hears her own voice from a great distance asking What was in that drink? Watches in horror as Wolf’s smile grows larger, revealing enormous, shiny white teeth. Smaller and smaller she contracts, as tiny as a mouse, and then a thimble. Before she can acclimate herself to this new perspective, Wolf scoops her up in the palm of his hand and pops her into his mouth, swallows her whole.

She opens her eyes to a dim cavern strewn with chewed up bones. Two other girls huddle together, terrified. Scarlet motions for them to remain silent. Reaches for the chain around her neck, a gift from Grandmother, clasps the pendant that opens up into a thin, sharp knife. Grandmother always said that a day may arrive when she would need to use it. As far as Scarlet is concerned, that day is here.

She whispers to the girls to stand back while she gains a strong foothold. Stabs the knife into the moist, pinkish lining of Wolf’s stomach, and carves a long slice. This takes considerable effort, because Wolf starts thrashing about, howling. The girls tumble on top of each other until finally a large tear opens up, and the cavern crashes into stillness. The two captives climb through the rent, and Scarlet follows. The fresh air negates the effects of the drug, and all three girls experience a rising sensation as they swiftly regain their original size.

Wolf is lying on the floor inside his hut, unconscious and bleeding from the wound in his gut. The two rescued victims thank Scarlet and run away as quick as their legs can carry them. Scarlet, though, waits. Ponders this man, this animal, who takes so much pleasure in harming vulnerable people. She prods his body with her toe, thinks about ending him. A stitch in time, though, is what Grandmother always says. She rummages through the drawers in Wolf’s kitchen, his bathroom, until she finds the supplies she needs. Washes the cut, ices it. Threads the needle from the sewing kit, and executes nine meticulous stitches. Stands up to survey her makeshift surgery with satisfaction.

Let the scar, she thinks, remind him not to fuck with girls picking flowers in the park. With that she leaves the hut, slams the door behind her. The pebbles, one by one, lead her back the way she came.

2 thoughts on
“The Liberation of Scarlet Little”