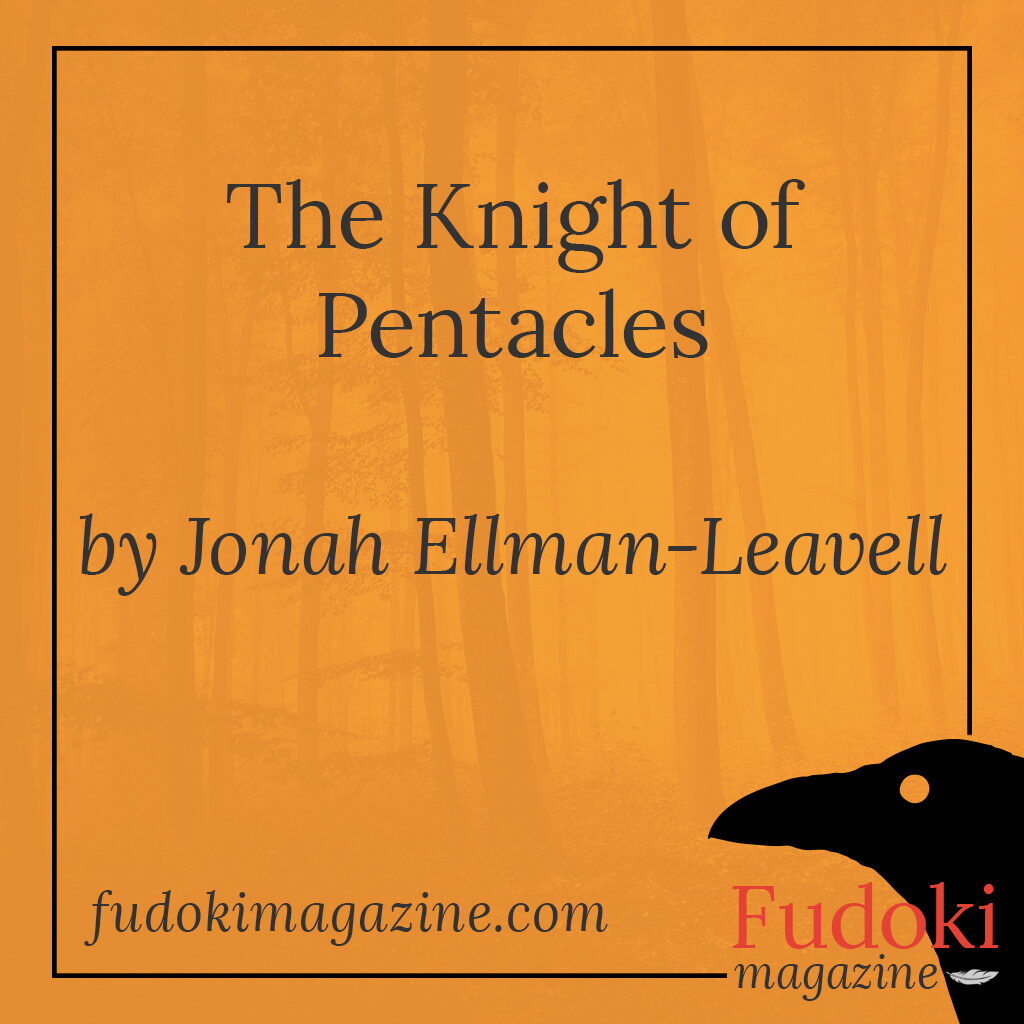 In the land beyond the sunset, past the silver waves of the great ocean and the high peaks of the snowy mountains, there was a great kingdom. The king was old and wise, and his power was great. Despite this, his son was a great warrior, young and headstrong, an untested man who wanted to fight and earn glory. After a particularly bad argument between the two of them, the prince put on his armor, adopted the name the Knight of Pentacles, and rode out from the castle, determined to make a name for himself.

The prince was no fool, he had no intention of truly placing himself in harm’s way. During his many years in the palace, he had come across an ancient manuscript in the depths of the archives, and there he learned how to make himself immortal for a month. The prince waited until it was the night with no moon in the sky.

Under the darkness of the moonless night, the prince rode into the depths of a shadowy forest and there he drew a great pentacle in the dirt. He sat down, closed his eyes, and slowly chanted the Words he had read in the scroll. After chanting them three times, he felt the air around him change, growing cold and dead. The prince opened his eyes and all around him was pure darkness, no trees, no stars, nothing at all.

“I am the Knight of Pentacles!” he called out with pride and courage, “I call upon you Death, I have a deal to make!”

“A boy who thinks he’s a knight,” the voice was cold and flat. It was followed by a dark chuckle. All the prince heard shuffling feet on the ground coming from somewhere in the darkness.

“Will you treat with me?” asked the prince, forcing himself to remain calm and confident.

A long silence followed. Finally, the voice came once more. “So brave,” it whispered, sounding as if it was coming from right behind the prince. The young prince forced himself to stare straight ahead, not moving, not glancing behind him. “What is it you ask of me boy?”

“I have come with an offer,” said the prince slowly, controlling his voice to keep any shakiness or fear from it. “I ask you to render me immortal for the span of a month, until the next night with no moon. In return I promise you two lives for each day of my immortality.”

“So bold,” laughed Death, “So confident. You are certain you wish this? I warn you, if you fail to deliver, your life will be mine.”

“I shall deliver,” declared the prince, “My life is my own and shall remain that way. And the Knight of Pentacles shall be known across the land as the greatest warrior there is.”

Death simple laughed and said, “We shall see, but in the end, everyone belongs to me.”

The next day the Knight of Pentacles rode into the nearby town and bravely declared his challenge to all who could hear. By midday four men were lined up, all coming to try their blades against this mysterious warrior.

By nightfall, all four men lay dead and the village looked in awe at this glorious Knight of Pentacles. The prince smiled as he spent the night drinking ale and singing songs and reveling in the praise of the villagers.

At the end of the week, the Knight of Pentacles was famous. He had slain a dozen men in single combat and had just arrived in a large town where knights, mercenaries, and squires alike were eager to prove themselves.

All who fought him were killed. On several occasions’ witnesses swore they saw him impaled or struck by his opponents’ blades, but they were always wrong for at the end of each fight, the Knight of Pentacles walked off the field and his opponents lay dead.

The prince had lost count of those he had killed. The month was nearing an end and he was the greatest champion in the lands. Now, all that was left was to reveal his identity, show everyone that this great warrior was their beloved prince, a hero. At the end of the month, the prince rode proudly into the palace, declaring to all that he was the Knight of Pentacles.

That night there was no moon in the sky. The prince walked out onto his balcony and called out. “Death!” he shouted, “Where are you? Have you come to regret your laughter? Your gloating? I met your challenge! I killed more men than I can count!”

The prince waited for his reply but there was none. He stood up on the edge of his balcony and raised his hands into the sky. “I know you can hear me!” he screamed, “I am the Knight of Pentacles! I have killed the best knights and I have even spoken to death and defeated him at his own game!”

His words echoed into the dark sky, but there was no answer. The stars twinkled in the sky; their cold pale light illuminated an empty palace. There was no one listening. The wind howled, the only response to the prince’s bold claims.

The prince looked out once more into the darkness, all of his cool confidence gone. “Answer me!” he screamed in a rage, “I proved you wrong! I dealt with death and came away the victor!”

All that he received in return was silence.

The prince screamed in rage and frustration. When he looked up at the stars all he saw the cold eyes of his father, the stern disapproval, the disappointment. He cursed Death and he cursed his father.

“Come to me….” The word floated on the wind, little more than a whisper.

As the cold wind swept through the air, the prince saw his father’s cold eyes once more and threw himself off his balcony into Death’s waiting embrace.