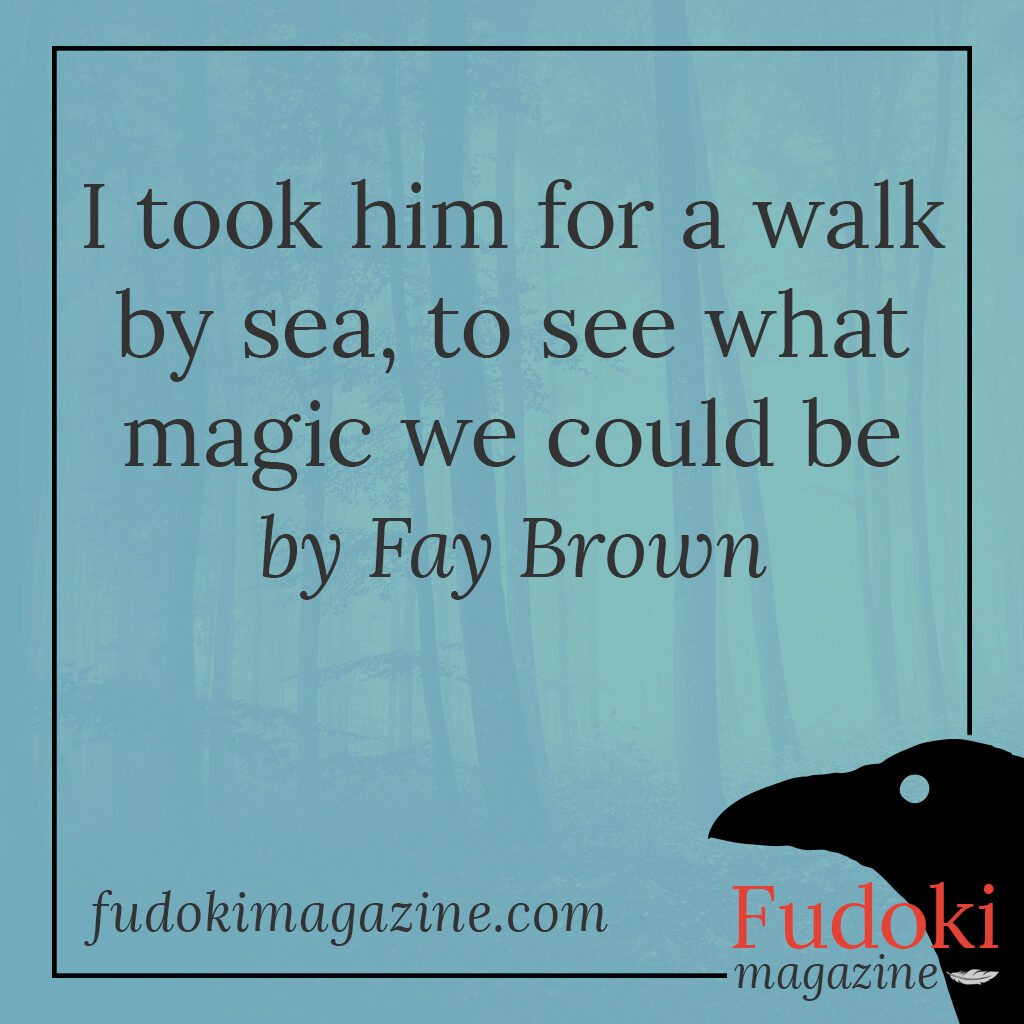 We walked beyond the certainty of bright lights; untethered, he matched my steps. My feet left impressions in sodden sand, a familiar tale through millennia. I had seen the moment of a Mesolithic day, feet drawn from wildwood to ocean’s edge, dated by discarded tools. They emerged out of time; a stray low tide granting brief celebrity, swiftly eroded by exposure. I imagined our trail fossilised by chance. A future archaeologist might ponder the life of canine and human before the trace of us washed away [small, gracile feet, slight impression, perhaps a woman or a youth; short stride – walking at an even pace].

We walked as though into a story, his sturdy paws padding in parallel to my naked toes. The horizon to my left was burnished by the dipping sun, coating its belly in the wine dark sea. We lay for a while and he dropped his head onto my shoulder with a sigh. The night washed in, suddy fingers reaching but not quite meeting the warmth of our bodies. The beat of his breath heated my chest against the cooling air as night congealed around us. I cupped the hardness of his head in my hand and rested my forehead against his. We breathed together.

Later, we walked again under the light of a rising moon, the daytime clatter of gulls made absent by the gentle shushing of the waves.

We stopped and ate and drank, but that is not the stuff of stories.

In the fullness of night, his keen nose led us to a new hill, where a trail parted through stiff grass. He roamed a little further now, close by but not beside me. I followed him as he had followed me, his turn to lead in the greening world, dark as the centre of an emerald. His route took us onward, deliberate, as we dreamt our way into a wood.

Passing between thin boles, he took me through deep undergrowth, thinning as the trees gained girth and tangled in fellowship. I rested my hand on furrowed bark and ran my finger into a small hole. Something fast and many-legged scampered across my wrist then was lost around the tree trunk.

We walked together, he and me, to see what magic we could be. I crouched to face him as he stood, forepaws braced on my shoulders, trusting my balance. His breath, less foul than vital, brushed my cheek as he spoke into my ear. He whispered truths and oaths and we became familiar to each other.