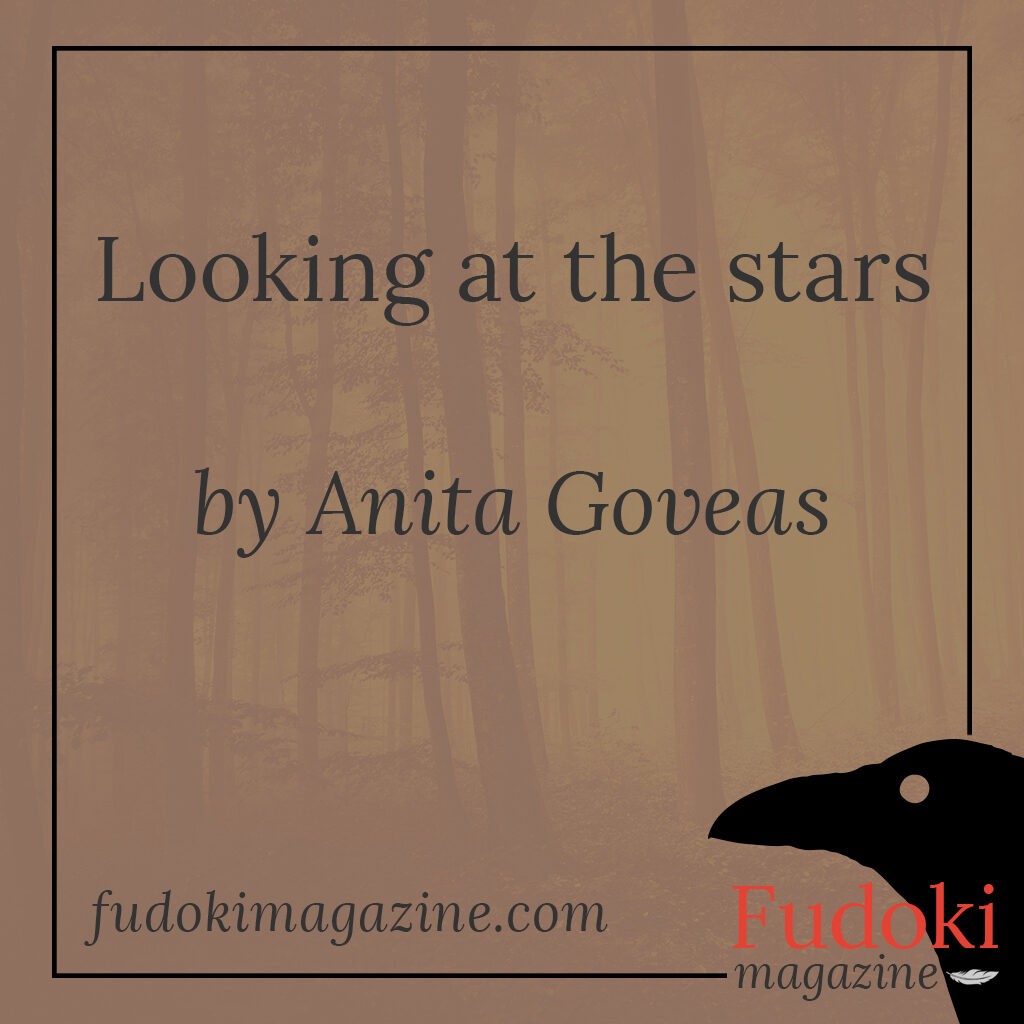 The baby is born at midnight, in a cramped incense-soaked Mumbai bathroom, in a flurry of shame and longing. He has curly hair, perfect pale oval fingernails, and skin covered in swirls of pale blue and navy, azure and pure white. Whatever his mother was going to do with him can’t be done in the face of this natural artistry, this pre-determined beauty. She wraps them both in her inky dupatta, and walks haltingly into the starry night, hands covered in her own blood, copper in her mouth. The swollen cord dangles between them.

She’s concentrating on the slip-slap of one chappaled foot after the other, cradling her light bundle. The skinny rickshaw driver’s beeping doesn’t penetrate her exhausted fog until he knocks her elbow. His angry words can’t form properly confronted by sunburst yellow eyes and fall between those painted eddies. He ushers the woman/baby/painting into the back, drives them to the wisest person he knows.  A brightly-coloured Ganesh smiles benevolently as they bob in streams of traffic.

His neighbour in Malad brought her ways with herbs and a pungent curiosity with her from her days as a village healer. Now she sits on her veranda, and eats Mangalorean snacks her son brings, sweet and crunchy kulkuls, tiny pickled prawns.  She tends her spiky-leaved aloe, steeps orange slices of fresh turmeric for tea, reads heavy musty books, waits for people in trouble to seek her out. Tonight, she lays out three shiny steel tumblers, boils extra hot water. Something is coming.

The rickshaw driver shifts from one sandaled foot to the other, always on an edge. The new mother focuses on his right foot, with its four missing toes. They’ve been sliced off cleanly with something bright and sharp, almost a blessing. The healer runs bony hands over the greying duo, hisses when she reaches the stomach. The baby is quiet and his whirling eyes never waver from any of them.  The healer is reaching for a knife as the mother’s vision is covered in coiling sparkles that slide into black.

Days pass in suckling mouths and masala tea on a hard-slatted bed. The mother can’t cope with anything solid, her lips and fingers tingle with the loss of the straight lines of her old life.  Ahead, her path is shrouded, laden with guilt. There’s eight nights of waking up to a twinkling sky, boiled earthy red-husked rice and warm contoured milk-scented skin against her thudding heart before she realises she’s not expected to go.

The first day she leaves the bed, to sit on the wide veranda and poke at frothy golden turmeric tea, she stumbles over piles of sharpened pencils, sheets of clean soft paper, stubby sticks of charcoal.  People have come to see the illustrated baby, have left these tokens for the exceptional mother who created him, so beautifully finished. Her fingers tingle again, to stroke this untouched bounty, to see what could be made or remade.

Days take on a rolling pattern — the mother sketches trees and flowers, people come with offerings, the healer makes them tea. The baby doesn’t babble, play with his feet, or drool. He lies on the veranda, looking at the clouds or the stars. It’s as if he is complete, and she is the work in progress. Her faded too-tight clothes and old chewed pencils turn up at the house. She catches shadows of her younger brother’s wiry shock of hair and her older sister’s turquoise eyes in the queue of patient people but she never sees her family again.

As the boy grows taller, the mother/artist and healer teach him the things they know. He learns about uses for plants, the names of the stars, how to try and catch the light with his hands.  He doesn’t speak, but hums to himself while he works through the heavy books on his own. He often lingers on the painting of an orange-toned man in a blue cap with a bandaged ear. Sometimes they all look at the stars together, they never shine as bright as the constellations studded into his skin.

They’re selling the artist’s work by the time his painted swirls start to fade, though his eyes are still two bowls of light. People write stories about him when he fades completely, sinks into the night sky as if returning to where he belongs. She fills her palate with blue and grey and tries to capture how he set her free.

One thought on
“Looking at the stars”