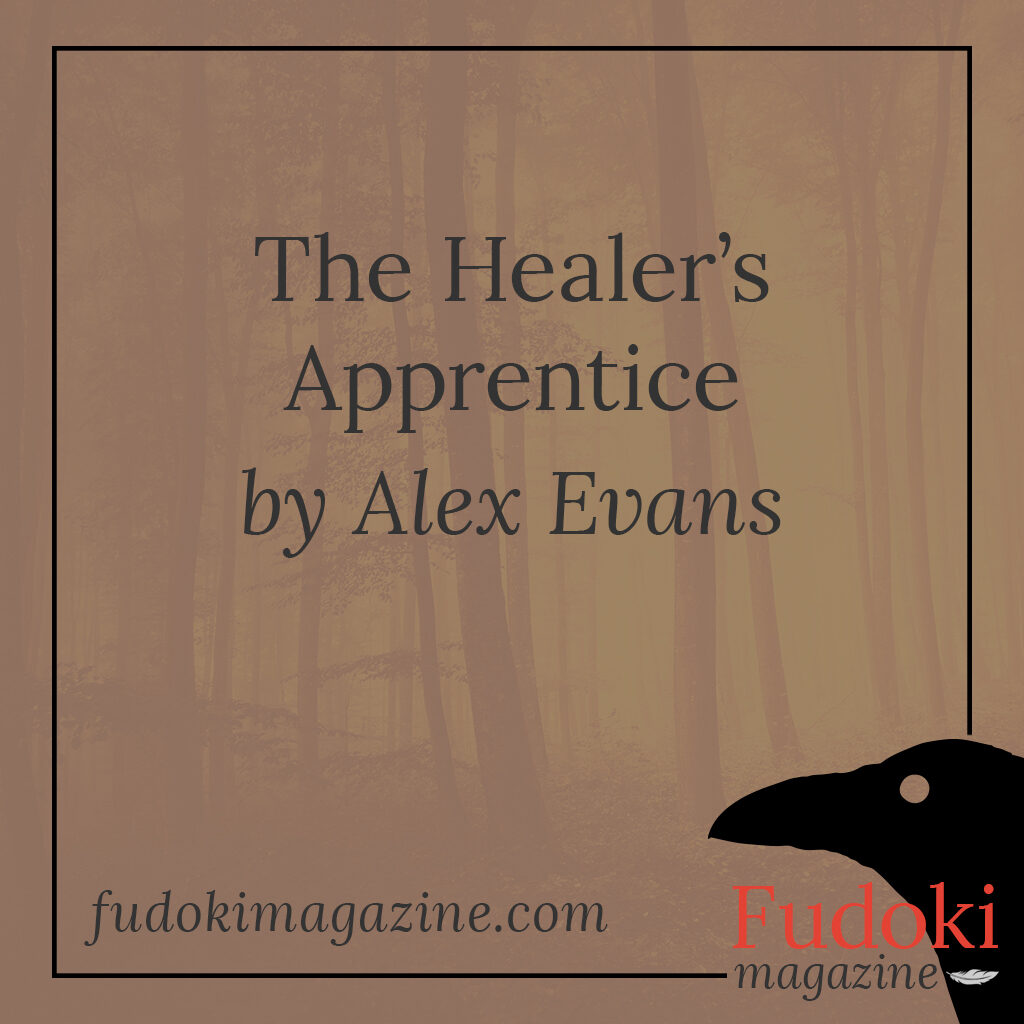 Once upon a time in a land far away, in a small village lived an old healer. She was wise and compassionate, and people loved her. When they had a problem, they went to speak to her rather than to the village chieftain and that made him terribly jealous. One day, she helped the chieftain’s daughter to deliver twins. The chieftain made a big feast to celebrate, but during the feast, he slipped poison in the healer’s wine.

The healer came home and felt sick. Soon, she was lying in her bed, barely breathing. Her apprentice was a poor girl with a club foot whom she took because she had no chances to marry. The apprentice gave her all the potions she could think of, but it soon became obvious it would not be enough.

So, the healer said to her apprentice, “listen, child, someone poisoned my drink with the juice of a black rose. I will soon be dead. I bequeath you my lucky green stone, may it protect you.

The apprentice said, “is there nothing to cure that poison, teacher?”

“The only thing which might do it is a drop of Unicorn tears and the only one who might have it is the Stone Witch who lives in the woods. But she is a bad woman and she put a spell on anyone who comes to her.”

Then, the healer became unconscious. The apprentice took anything she thought would make a good present, honey, brandy and cakes, money they had, put the lucky stone around her neck and went to the house of the Stone Witch. She walked for a while, limping, frightened as there were wolves in those woods, and suddenly, heard a noise. She turned towards it and saw a warrior, old and scarred, with a wolf pelt on his shoulders, a battle axe in his hand and a bow on his back.

“Who are you child, to walk in those parts? Are you seeking something or running away from someone?”

The girl thought quickly but found no reason to lie. “I am going to the Stone Witch, for my mistress is dying and she has a cure”

“The Stone Witch will kill you. If not, she will put a spell on you and force you to serve her. That’s what she did to my brothers and sisters when we were crossing those woods to join the King’s army.”

“I have to try. Which way is her house?”

“If you follow the trail of fir trees, you’ll get there. She never leaves the four walls of her magic home.” He stopped abruptly and his eyes widened. “What is that thing on your neck?”

“My mistress gave it to me.”

“If you touch it while looking at something, you will see its true form. It cannot be stolen. Only freely given.”

“Maybe I can bargain it for a cure?”

The warrior gave her a skeptical look. “Maybe. Whatever you do, don’t enter her house. If she wants to bargain, tell her to get out to speak to you.”

The apprentice thanked the warrior and went on. Soon, she came to a wide clearing. In the middle of it, there was a stone table, surrounded by six standing stones. She touched her pendent and the stone table became a marble palace with gleaming walls and each standing stone became a tall warrior with empty eyes, a sword in his or her hand.

The apprentice gathered her courage and called, “my greetings, Mother Stone Witch.”

A low throaty voice responded. “Who are you, girl, for coming here?”

“I’m from the village. I need a cure for my mistress. She has been poisoned with Black Rose.”

“She must have displeased you chieftain. He comes to buy some from me sometimes.”

That scared the apprentice even more. But she said in a trembling voice, “would you sell me the cure? I have brought cakes and honey and brandy.”

“You think I’ll swap it for some food?”

There was a snort.

“I… I have a shaman stone,” she stammered.

There was a pause. “Come and show me.”

“No, your guards are going to tear me to pieces!”

“No, I’m too scared. Maybe you’ll put a spell on me. Just come out with the cure and I’ll give you the stone.”

There was a silence, then the palace gates opened, and a splendid woman stepped outside. She was dressed like a queen in fine silks and was holding a thin vial of a blue liquid. She made three steps towards the girl.

An arrow flew from the woods and struck the woman straight in the chest. She fell down, her blood pouring on her clothes. As the apprentice was staring, stunned, the old warrior stepped out from behind the trees holding his bow.

“At last, I killed her!” he cried. “Hear Brothers and Sisters!”

Coming back to her senses, the girl ran to pick up the vial. The warriors standing around the palace blinked and looked at the witch’s body in surprise. Their eyes were not empty anymore as they came to stand around the old warrior.

“What happened?” they asked. “We have been walking in a dream since we met that woman in the woods.”

“The Stone Witch put a spell on you,” said the old warrior. “For three years, you have been standing guard in front of her palace and I was despairing to free you, until that girl came and lured the witch outside. You owe her your life.”

The seven warriors cheered and escorted the apprentice back to the healer’s house. She gave the vial to her mistress and she recovered. Then she told what happened to all her neighbors. People started to remember there were other suspicious deaths in the years past and cast the chieftain out of the village.