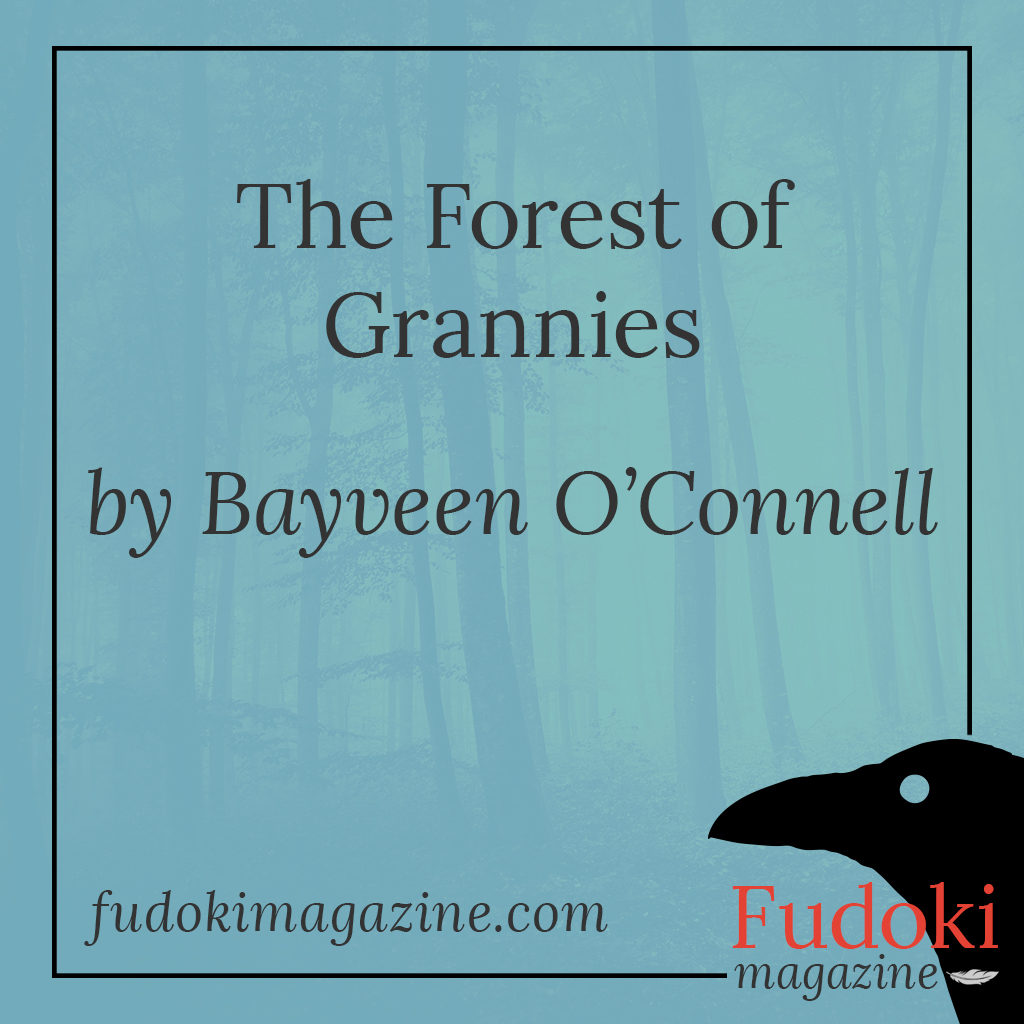 In the forest something stirred and woke. It breathed a long groan and exhaled centuries with its dead breath. Gathering, it made a pungent wind that caused the leaves to curl and wither.

A tubby child of seven was playing hide and seek, nestled in the nook of an ancient tree root. Opening one eye, he shivered as the strange wind poked at him, trying to flow in under his collar and up his sleeves. As he sniffed, he swore he could smell rotten flesh. The wind changed, died down for a moment and became dull clapping. Then a flash of russet passed before him.

“Uh?” The boy opened both of his eyes.

The boy’s eyes bulged and he shook his head.

“I am Kitsune and that noise isn’t clapping,” the sleek-haired animal continued as though it could read the boy’s mind. “It’s the sound of the forest ghosts beating their hollow bones to summon food.”

“Jukai is haunted by the starving grannies who were abandoned in the forest when food was scarce,” Kitsune whispered.

“My granny wouldn’t eat…” he narrowed his eyes at the fox.

“Wouldn’t she? She died for you, now you are her reward,” Kitsune said as she stared back at him.

The boy’s face turned red, a tiny tear escaped and he balled his fist and struck Kitsune, who jumped and scampered backwards.

“No,” the boy shouted, getting to his feet. “My granny will remember and protect me. She will kiss my head like she used to.”

A sad look passed to him from Kitsune before she turned and disappeared into the bushes.

The clapping sound was coming closer and the boy scrambled back inside his tree root as swirling white and silver forms swam towards him through the trees. A mass of old women’s faces appeared grinning at him with their mouths closed.

“Granny! Granny Hitomi where are you? It’s Hiroki!” the boy called.

The smiles grew wider and the happy expressions on the grandmothers’ mouths cracked to reveal chomping rows of jagged teeth. The boy’s scream caught in his throat as the ghosts descended on him. The grannies frenzied around the boy gnashing, biting and tearing until there was nothing left of him but scraps of shirt and the soles of his shoes.

At the edge of the forest, Kitsune slipped out of her red fur and became the boy’s mother. “Little boys never listen,” she sighed.