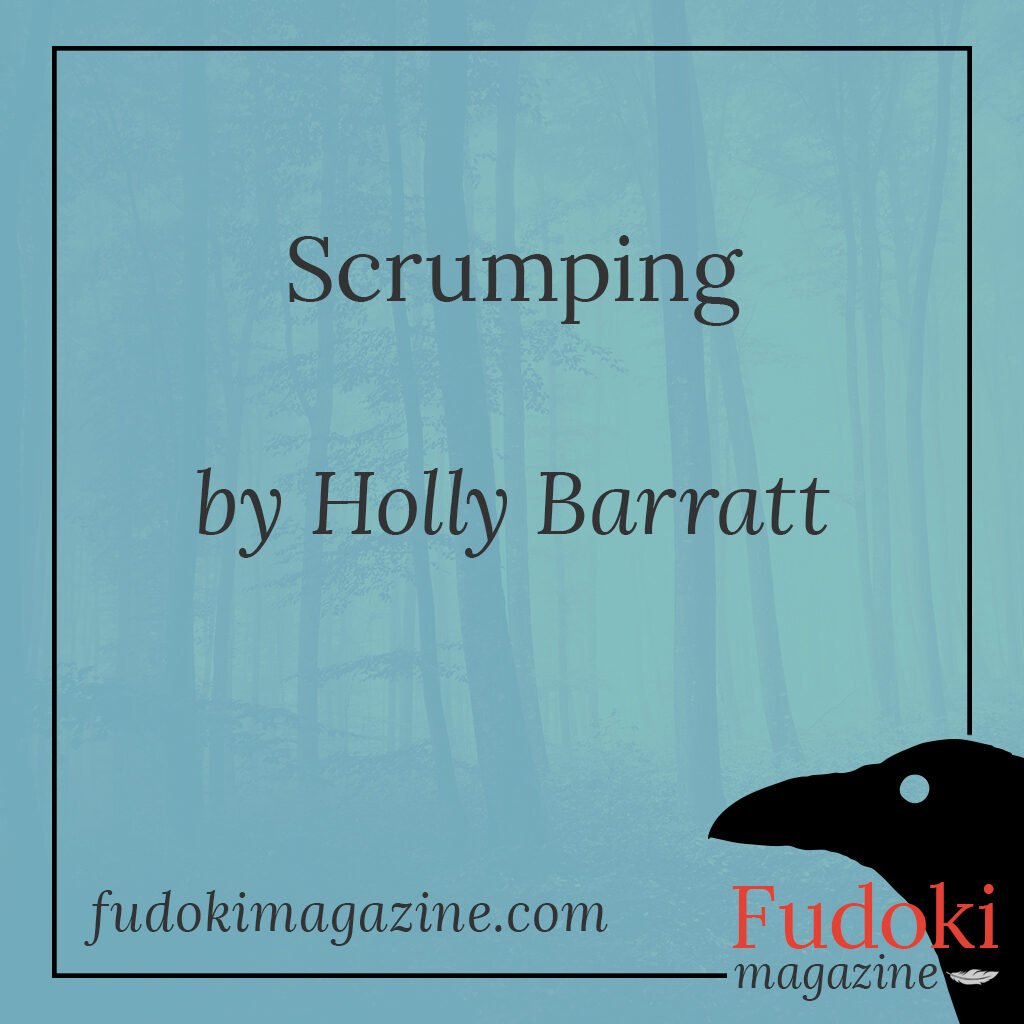 It’s August, the moon is full, and the sound of the waves bothering the rocks half a mile away is insistent. The orchard smells of father: apple and salt. Cider-soaked and sea-preserved, he was so well pickled he could never have grown old if he lived a thousand years.

Jenna and Menna, dresses tucked in knickers, climb over the tumble-down wall. Menna reaches out to the strongest branch of the nearest tree, swings herself across and drops softly to the ground, the lantern swinging in her free hand. Jenna follows, stopping to un-snag a stocking from a piece of bark.

Jenna picks up the nearest apple from the ground. Her fingers sink into it and release a powdery paste onto her hand. She wipes it on her dress, perfuming herself with fermented sugar that makes her feel drunk. Swallowing a laugh, she throws the remains at Menna, who ducks out of the way. The apple hits the wall with an insolent thud. Little bits of white insides stick to the stones as the juice runs down to ground.

Father never grew old and never died. He was lost at sea, which is only as good as dead. And then Uncle Jack came for the orchard. Young girls could not possibly inherit and run a large orchard, especially one that needed rescuing from the mismanagement of such a renowned drunk. A man who loved cider so much he sailed his boat and crew out into a deadly storm with no thought for consequence. What good could come of the daughters of a man like that anyway?

Menna throws an apple back at Jenna. It hits her on the shoulder, the impact firm but not painful, leaving a wet patch on her bodice.

“Shh,” said Menna, as they try to contain their laughter. They are on serious business.

They need to select firm apples – nothing too soft or over-ripe, and nothing with maggots or rot, so the ground won’t yield much of use. Nothing too hard either. They make their way around the trees, Menna keeps hold of her lantern, although the moon is bright and they know the place well. Jenna reaches upward, checks the fruit, selects the best and gathers them in her little pouch.

“How many?” whispers Menna

“Twelve or so, the pouch is almost full.”

Jenna picks the fruit nearest her face, and they head back over the wall. They break into a half-run, toward the sound of the waves, passing the thirteenth apple between them for alternate bites, tasting sea-salt mingling with sweetness. Reaching the clifftop, they tuck dresses into knickers once more, and descend the twenty feet to the beach below, where their oldest sister waits.

The moon lights up the sand, and it looks just like a new block of sugar. Wreckage litters the beach: planks of wood too rotten or too small to be useful; rusted and tangled metal; broken and empty nets; stinking fish with diseased guts exposed. Everything of value has been salvaged by Uncle Jack’s people. Or so he believes.

Tegan stands amongst the rubbish, her hair in tangles, her dress damp at the bottom and half sticking to her legs, half billowing like a sail. As Menna and Jenna come closer they see Tegan has built three crosses in front of her, made from driftwood, lashed together with string and seaweed, standing up in the sand just below the tide line.

Jenna presents her pouch to Tegan, who takes each apple in her hands, inspects them, feels them, weighs them, then selects her favourite three. She pushes each chosen fruit onto the sharpened head of a cross, piercing the flesh and releasing more juice. Then she takes hold of Menna, untucks the skirt of her dress, rips a strip from it and ties it around a cross where wood meets apple. She does the same to Jenna, then finally to herself.

Three apple headed figures in ragged dresses stand on the beach amongst the remains of father’s ship. The tide is coming in quickly, wave jumping over wave, the roar drowning out speech. Tegan takes her sisters’ hands and pulls them back to the cliff.  Sharp points of rock stick into the flesh between their shoulder blades, and into their bare necks. As the tide comes further in it picks up bits of the wreck, tossing them around, swallowing whole or spitting them out. When it finally meets the three apple-headed figures, it tears them up instantly. The heads leave the bodies, first swallowed up into a wave then revealed to have survived, bobbing along the surface of the next wave.

The smell gets stronger – sugar, vinegar, dizziness and a floating lightness, infused with salt and rotten fish gut.

The moon illuminating a shimmering patch on the dark water. The sea seems to pause, a moment of stillness and quiet. A hand rises from the waves. It is the size of a small sapling, made from barnacled and rotted rubbish. It grabs the three apples in one movement, making a huge splash that soaks the girls on the rocks. Then it rises more to reveal an arm of broken wood and rusted metal, held together with empty nets, and fish gut. The figure unrolls, until towering above them are three gigantic heads, each with a shiny ripe apple for an eye.

The JennaMennaTegan giant grabs the clifftop and with strong arms heaves herself up onto the path above. She turns around, reaches down, allowing the girls to climb onto her hand and be lifted up from the beach to safety. Picking up the scent of Uncle Jack, together they stride towards the orchard, knowing it will be theirs again by morning.