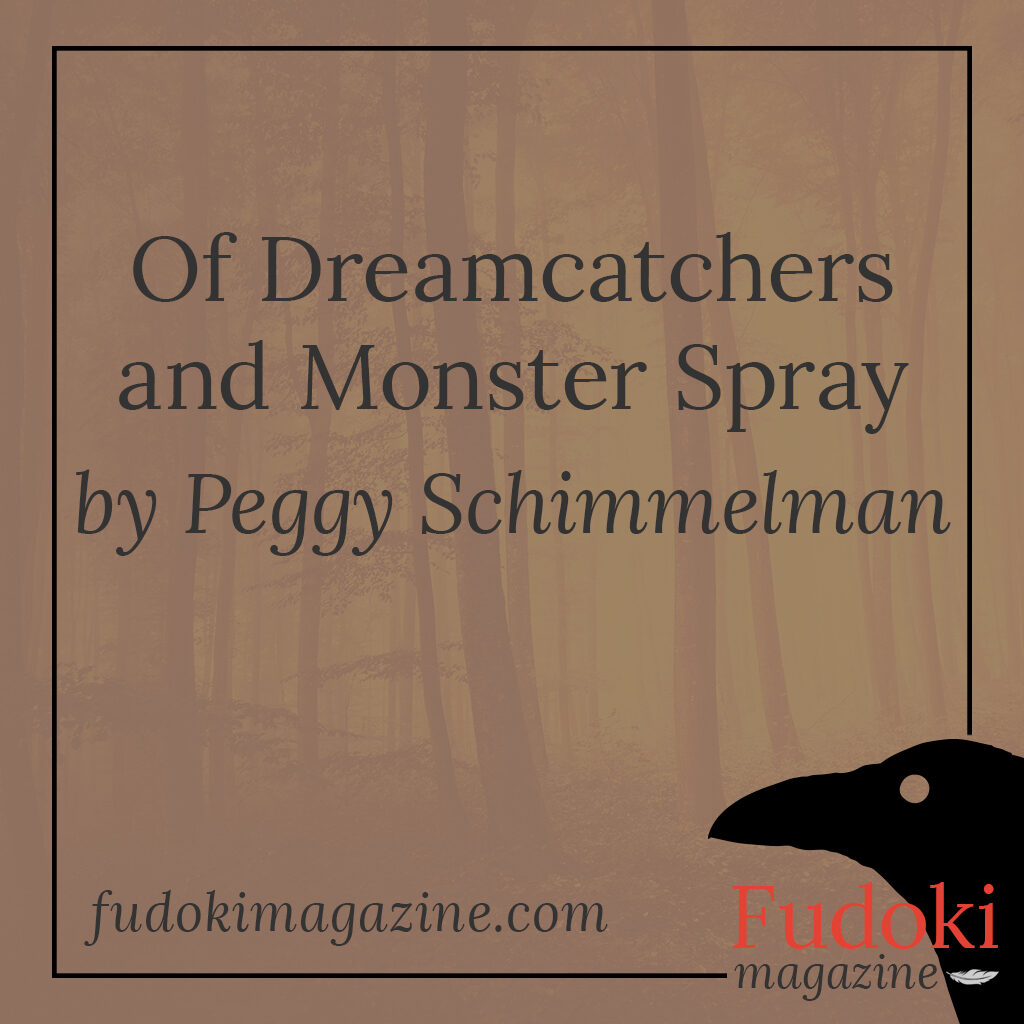 This child is no friend of darkness. No comfort she finds in the soft glow of nightlights or the stuffed bears and puppies that surround her. The mother’s sweet scent has dissipated with her departure, along with memories of bedtime stories, melodies crooned, prayers and goodnight caresses. The mother retreats to her own bed now: “Please, sweet Jesus, one solid night of sleep.” This prayer flies off to the Christian god, for the mom has no faith in the new dreamcatcher who waits on the wall above the girl’s bed, his hoops and yarn, feathers and beads fashioned with care by the girl herself, just six years old—a pretend Indian Princess, but he doesn’t hold that against her. Unoffended, he watches the prayer float heavenward. The mother is not his concern.

It’s the girl who has summoned him and she he must serve, corralling nightmares and spirits that would trouble her soul. But tonight, like most nights, hours will pass before exhaustion conquers fear: two hours of footsteps, tiny but menacing, scurry-scratch-scurry across the roof, a shadow in the corner, almost certainly a ghost. That hideous hag, possibly a witch, squatting in the half-open closet. The walls tap-tapping, kerplunks from the kitchen. Thrashing, crying out, mother reappearing, reassuring, pleading. At last, sleep prevails. She relaxes her grip on the blanket.

From her closet springs the frightful crone. The dreamcatcher swoops, tucks her into his web. She dissolves with a shriek, the girl unaware. Next is the big teenage meanie next door, who sneers as he climbs through the window, but he too is caught in the feathery snare. Vanquished is the army of child-eating trees by the hundreds marching down from the hillside, leaves aflame, branches transformed into scissors and hooks. No challenge is the monster from Sesame Street, Elmo gone mad, hurling cookies and garbage and curses and threats, or the evil grandpa with an axe and an apron, who would chop up the girl for a stew.

The girl sleeps on, seeing only what passes through the dreamcatcher’s filters: see-saws and trampolines, playful babysitters, and the occasional pesky brother, whom the dreamcatcher finds harmless and amusing.

He wishes this child were more like her brother. In his bed down the hall, the four-year-old scampers over hillsides, through forests, hitching rides on the backs of friendly dinosaurs with Tavis and Colton, inhaling fragrant mists of dream dust and clover from the aerosol can tucked under his pillow: Monster Repellent, a gift from Grandma. Big sister was scornful, and jealous.

The dreamcatcher toils through the night, his web soon crowded with ogres and goblins and bad boys who pinch, all struggling to flee their Ojibwe prison, their vile missions thwarted, their fate unknown. Down the hall, the boy chuckles and coos in delight as he flies through the clouds on his pet pterodactyl, armed with light saber and aerosol can, slaying the beasts of the dark side.