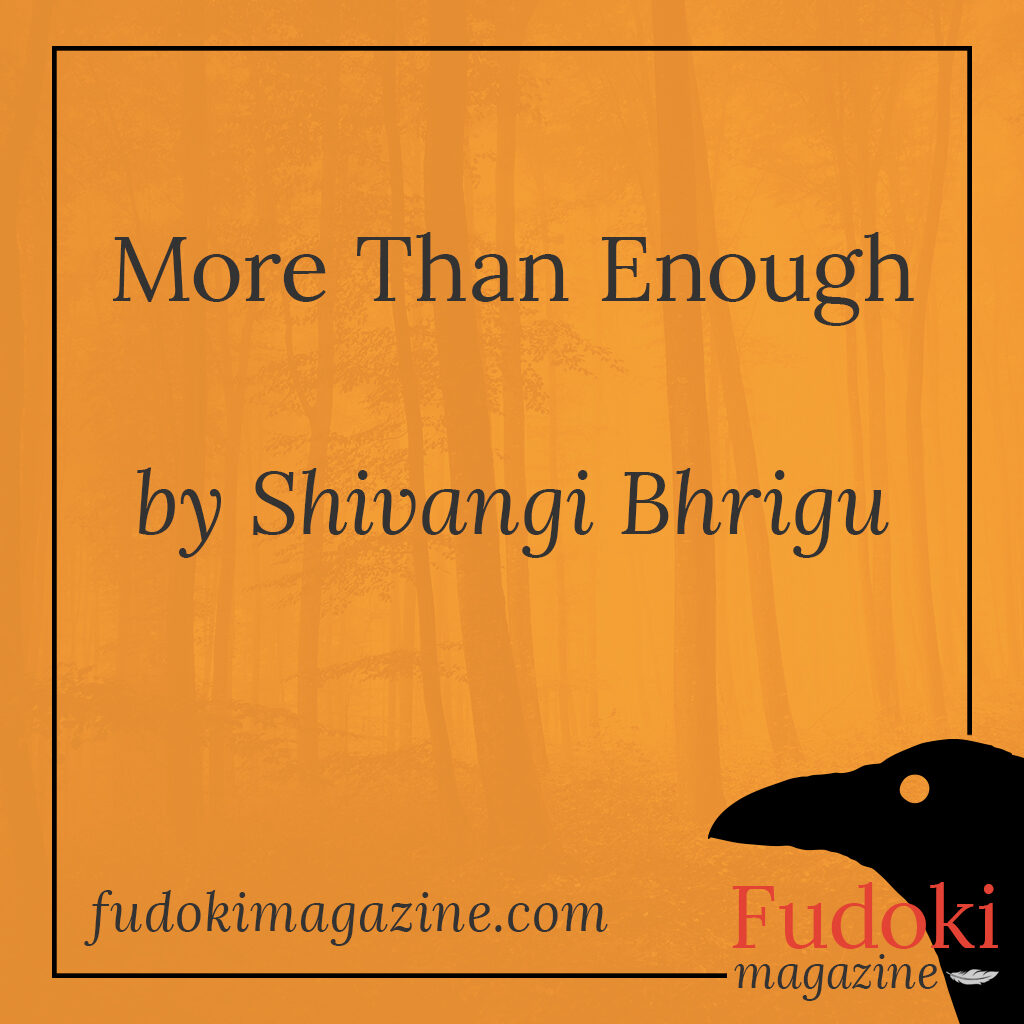 When Shlesha had died, nobody had bothered to give her a cremation.

When Shlesha had been born, her mother had given her that name, insisted for it. More than enough, it meant. The midwife had implored to change her mind. A name given without consulting the priest, to ascertain what was be appropriate for the new-born according to the stars dotting the sky at time of birth, would bring misfortune, and only misfortune. The dying woman had held strong. The name embodied the worth of the girl and served as a reminder to the girl’s father: even though she had not given him a son before she passed, she had left him a daughter. And the daughter would be more than enough. The daughter would bring him luck. But misfortune had always plagued Shlesha.

When Shlesha had set eyes on her future husband, she had hoped for a different life. She had hoped to be swept away from misery, into a world of love, just as his eyes promised her. She had forgotten that never in her life had she worn her name with justice, been even enough for anyone. She had dreamed, amid the pitter-patter of her sisters and the cacophony of the wedding preparations, of a beautiful life. And her husband had led her further into that dream with sweet promises and tender love-making. The dream had shattered fast.

When Shlesha had, very softly, refused to ask for more money from her father, it was not only her mother-in-law, but also her husband, her sweet, loving husband, who had slapped her across the face, toppling her onto the ground. Bitterness bloomed hard and fast for her, everywhere, on every inch of the walls of the house, across the ground throughout the property, curling tight around her wrists and neck and leaving purple and black bruises on her body. The house whispered hurtful things she should have been used to, but that still, somehow, made her eyes water and her ears scorch. Her dowry was not enough. Her skin too dark, her nose too large, her teeth too yellow, her feet too long. The food she cooked was never good. Although she was always working, she was not working enough. She was a waste of space, a waste of money, a waste of time. Tender love-making turned into something petrifying and violent, that she had to shut off to survive. Still covering her bruises under her sari, she stayed and smiled and prayed. Prayed for a son.

When Shlesha had failed to hold her husband’s seed and grow a baby in her belly, after five years of being married, day for day, her mother-in-law had spat in her face. Her husband brought a second wife home the very evening and her mother-in-law had thrown her out of the house to live in the cowshed. I will not let your barrenness touch my daughter-in-law, the old woman had hissed. So, she slaved for her in-laws by day and slept next to the cows by night.

When Shlesha saw the new daughter-in-law sneak away with the young neighbour next-door, she had tamped down her shock and kept her silence, knowing that none would believe her.

When Shlesha had dared tell her husband that the child his new wife was carrying was not his, he had beaten her again, until she bled from her ears and nose and could walk no longer. She had crawled far from the house, where her husband’s property faded into the forest, to breathe her last.

When Shlesha’s body had been left there, nobody had cared.

When Shlesha’s body had disappeared, they had thought jackals had taken it for a meal.

Then Shlesha had risen from the dark, fog-smeared forest one night. Chudail, they had screamed, running frantically for safety. But there was neither safetly nor saving from her. She took her time, sweet and slow, savoured each of them, one by one. Although, later, standing above their bloodless corpses, with their blood dripping down her chin and her fingers, the respite and gratification she had waited for never came.

When Shlesha had lived, she had never been enough for anyone in the world. Now, it felt like the world would never be enough for her. That was alright. She turned her gaze to the sunrise, she would go that way. In that direction, a two-day walk from her dead husband’s house, lay her father’s house. She would go there next, even though he and her stepmother had told her never to return. She would let them hear of what had happened to this family first and watch them blanch with horror. Then only would she make her appearance. She would listen to their screams and not with fear this time, the fear would be theirs. Then she would watch them blanch in death. Maybe they would sate the deep hunger that burned through her.

But when Shlesha was waiting that night, three hundred and twenty-four years later, her appetite was greater than ever. She smiled at her reflection in the still water, which, with the backwards-turned feet she had hidden under her sari, indicated what she truly was, although a man would be easily swayed by the beautiful face she had stolen to wear. That was alright. She was, after all, only starting.

More Than Enough is based on the South Asian “legend” of the chudail, who is some sort of female vampire who sucks the blood or soul of a person to kill them or just make them get really old really fast by sucking their life-force – the versions vary greatly. It is believed that if a woman dies from being mistreated by her in-laws or during pregnancy/childbirth, she’ll come back as a chudail for revenge or because something unfulfilled has bound her here with an insatiable hunger. I used a few of these elements that I have heard of, along with issues that, unfortunately, are a part of South Asian culture to create this story and I hope you enjoy it.