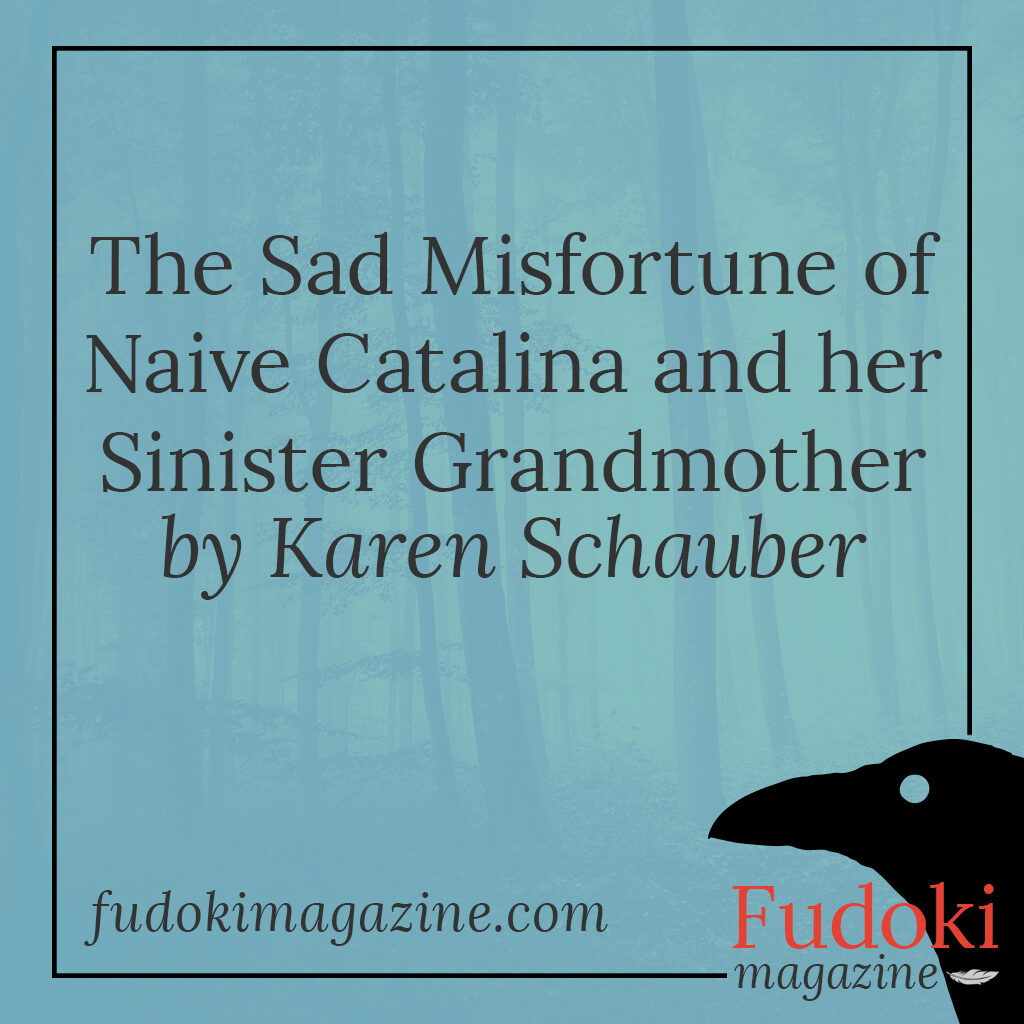 Catalina was feeding her grandmother when ocean waves swelled bringing news of her brother Tamas, long gone on a misguided sailing expedition. The blustery winds of the high seas played mischief with the pious families of the village, spreading rumours and lies, twisting and winding them up like a chroniker with no hands. Today it was Catalina’s misfortune which blew in to insinuate itself.

The grandmother who was used to these inflammatory gusts and currents, had sway over their interpretation, and while her granddaughter was held hostage by the disquieting whispers and mysteries, she, hardly paid them attention. Slender feathered birds cloaked in turquoise and citrine plumes decorated the wallpaper in the kitchenette where they dined. Perched above the applique mirror pool the Modigliani figures gawked at the moon’s reflection and ruminated on secrets kept hidden on its shrouded side.

Inserting one finger after another into to her deep cavernous mouth, the grandmother lathered them with loud smacking sounds indicating her pleasure and satiety and signaled the end of her gorging. Her exaggerated volume, Botero inspired, leaned into Catalina, who, preoccupied with melancholic thoughts of her long-lost brother, was not prepared for her grandmother’s ill-conceived prognostication, which the matron disguised and professed as divinely inspired.

Catalina knew of no other heart. When she dreamed of the golden eagle’s sharp talons poised to pierce and crush its prey, and the cunning lynx stalking its victim ready with a precise bite to the throat, she awoke in a fitful sweat; her grandmother faithfully caressed her cheek and soothed her brow with an uncommon tenderness. But the young Catalina did not recognize or heed the dream’s vivid warning, which her grandmother interpreted only too well, and concealed.

The mammoth figure crumpled over to bathe and scrub the young Catalina, perfuming her pubescent body in aromatic water in which purifying herbs and aromatic leaves had been boiled, the latter clinging to her puerile form, preparing a vision to be worshiped like Aphrodite; her flowing yellow tresses brushed and left unadorned and alluring.

Within days, throngs of expectant men; soldiers, farmers, tailors, vintners, and smugglers all, responded to the grandmother’s call for wise council; a salute to her maleficent fabrication which she continued to disguise as prophecy. They congregated outside the modest cabin as the stench of deceit and greed was ripening, the grandmother, licking and sucking her lips in grotesque anticipation, took up her position as custodian of the coffer at the entrance, ruminating on her dreams of grandeur, like a troll waiting under the bridge to collect coin from the lustful as they crossed the transom to enter the damsel’s lair.

In her innocence the beauty would put the lotharios to shame.

Catalina prepared her questions for each of the hungry wolves in the herd. They would offer clues as to the whereabouts of her brother, she understood, in exchange for a gaze, a touch, a taste, a moment to lie with her; nothing too costly or ruinous her grandmother promised. The young girl took stock of the accursed dark and motley men, the sizes and shapes that paraded before her, the stains of musk and char and barbarous intent.

She closed her eyes, an indefatigable expression settled across her cherub face – she would soon know the whereabouts of her beloved brother.

As if on cue, incomprehensible melancholy floated on the wind, banging and slapping against the wooden sideboards of the modest cabin, an impatience, unrelenting and insistent, interrupted the boorish procession; grotesque and diabolical figures, Bosch inspired.

The wind became unbearable, flapping like the free sail of a drifting sloop. Over the whistle of the brewing storm and the lash of the water, a gust of rain forced its way into the cabin like a pack of hounds. Catalina could hear distant shouts, the howling of far-off creatures, the cries of the fateful shipwreck. She woke up out of her stupor, knowing that it was the wind of her misfortune, and finally understood in her heart that her dear brother was dead.