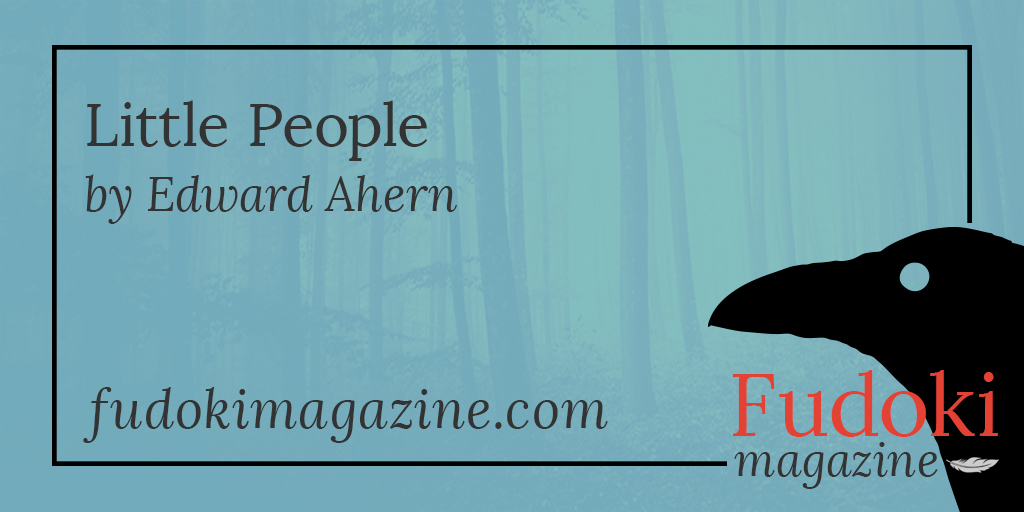 “Yeah, they seemed okay. They paid well, which I guess is the important thing. They worked at being friendly, but something was always straining at them. It’s a small house they’ve got, but then they’re really little people. No complaints, little made it easier for me to clean.”

I shifted my backside. As I got older I’d skinnied down, and the metal seat of the police station chair ground my butt bones.

“What? Nah, Ferdie and Emma never partied that I know of, at least I never had to clean up after one. Funny about that. Like they didn’t want people to know they were there. Five years of cleaning their place and I never noticed that anyone had visited. They weren’t bad neighbors, kept the yard nice, put out a flag on the fourth, but they were odd. Like they would put Christmas wreaths on the windows and front door, but never put up a tree, never had any presents or decorations set out inside. Fact is, they got sort of angry-frightened over the yule time, like they’d had a bad experience.”

“I asked Ferdie once about where he’d come from, but all he said was ‘Greta, sometimes you can have a dream job but still be living in a nightmare.’”

“Hah? No, no drugs I know of. Didn’t even drink. They ate really plain, fruits and veggies and home-baked bread, meat once in a while, but not even a box of cereal or a bottle of soda….Well of course I know, I took out their garbage didn’t I? They were healthy livers for sure. Oh, one thing. They had some kind of growths on the top of their ears that had to be trimmed back once in a while. Every month and a half or so they’d have bandages on their ear tops.”

“Yeah, really little folks, maybe four and a half feet tall. But shaped nice. If you weren’t standing next to them you’d think they were normal.   So anyway, maybe a week ago, this big, fat guy with a scruffy beard shows up in the neighborhood and starts asking about them, how long they’d been there, what they’d said about where they’d come from, stuff like that. And I see him sitting in a car outside their house taking pictures. Couple days later, at their next cleaning, I told Ferdie about the guy and Ferdie got all exercised, asked a bunch of questions, and then he just went silent, like he was thinking. And then he went strange.

“Greta,” he says, “tomorrow, after dark, Emma and I would like you to drive us to the bus station. I’ll pay you now if you like. At nine pm sharp please be in your car in the garage, door open, with all the lights out. Can you do that?”

“Ah, Ferdie,” I says, “you could take your car, or maybe a taxi, and it would be cheaper.” See, I don’t like to drive after dark.

“Ferdie hesitates, then he says, ‘It’s really urgent, Greta, and I’ll pay you well—Emma and I are-call us undocumented aliens-and this man is trying to take us back to where he had us working for him. Please, please Greta, I need to leave our car in the driveway, house lights on so it looks like we’re home while we sneak over so you can take us. Can you do that?’”

“He looks like he’s about to cry, and I pat him on the shoulder. They were always good to me, and what he’s asking isn’t illegal. “All right, Ferdie,” I say, “nine pm, my garage, no lights.”

“He gives me a coin, more like a medal really, gold. Here it is. See? Must be a couple ounces of gold. Funny design and letters on it. So, at nine I’m in the car waiting, but nobody shows. At quarter after I figure somethings wrong, get out of the car and walk across the street to their house. The front door’s not quite closed and I push it all the way open, didn’t even need my key.”

“But the house is empty. The living room and kitchen are trashed like there’d been a fight, but I never heard anything. I even checked Ferdie’s basement workshop that he never let me into. The workshop’s full of hand-made gadgets and toys, like nothing I’ve seen in stores, but no Ferdie, no Emma. So that’s when I called you guys. I think maybe the fat guy took them.”

“The fat guy? Nothing unusual about him. White, middle aged, flushed cheeks like he was a heavy drinker. I’d like my coin back please, I’m going to cash it in… Oh. Okay, but you gotta sign for it so I can get it back when you’re done.”

I put my hand in my jeans pocket and finger the other medal, the one the fat guy gave me to talk about the little people.