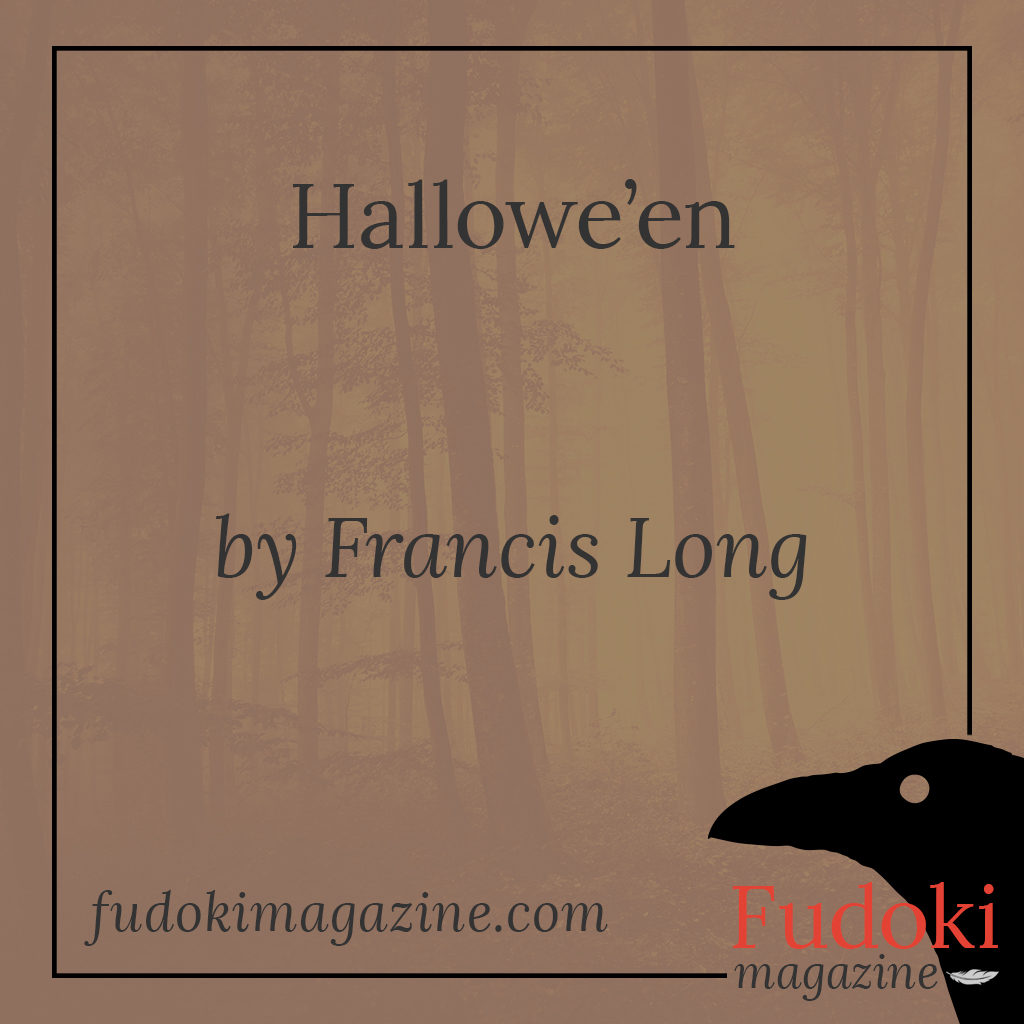 I’ve always enjoyed popping over to the other side at this time of year and mingling with the mortals for a few hours, maybe put the wind up a few if the moment was right. Last year I happened across a fancy-dress party and figured it would be a prime opportunity. This crossing over was getting more difficult with Lugh trying to put a stop to my little jaunts. He was turning into a right pain in the arse lately, ranting on that no-one believes in us anymore. When Ériu, the ‘banshee’, sings her song, you see belief on their worried faces then.  On this particular Óiche Samhain a fair few drinking tins were being emptied by the revelers, who were also partaking in a smoking ritual. A shame that drinking horns have been eschewed for these metal tins, definitely not the same experience. I watched from the other side of the veil for some time until I reckoned the party-goers were at a suitable stage of inebriation to not give my appearance much pass. I rent an opening in the fabric separating our two worlds and stepped into the dark and empty hallway. It wouldn’t do to be seen making an entrance. There was an awful racket emanating from the kichen where it seemed all the action was happening so naturally that was my first port of call. One of the mortals greeted me as if we were old friends pressing one of his drinking tins into my hand. As it would be rude to refuse, I accepted but a single draft and it was drained. I crushed it and threw it into a corner. This watery piss called lager, give me good old mead any day.

‘Jesus, thirsty or what?’

‘Indeed. Where can I avail of more?’

He opened the door he was leaning against and out of the lit interior pulled out another tin offering it to me. But as I went to claim it, this pipsqueak held onto it.

‘Hold on there horse. Who’re you dressed as anyways? Conan the Barbarian?’

This line of questioning seemed to have piqued the interest of his colleagues, who turned to see who he was addressing.

‘Maybe he’s Beowulf?’ One of them chimed in.

‘Think closer to home,’ I snorted.

‘Ragnar Lothbrok,’ another pair blurted in unison, bursting into fits of laughter like this was the most hilarious comment ever.

‘Cú Chulainn?’ says my friend with the beer, straining every cell in his drug addled brain.

I wrenched the tin of beer from his grasp and finished it in one swallow, I really needed something stronger. I thought of telling them who I was, how the Tuatha Dé Danaan preceded by an age the stories they were vaguely aware of; Tales of Setanta, the Táin Bó Cúailgne or Fionn MacCumhaill. But why waste my breath? Instead I raised myself to my full stature, outstretched my arms and threw my head back and summoned the storm. The room grew cold and dark, a vortex of cloud swirled where the ceiling used to be, lightning flashes erupting from its centre. The walls dematerialised and a gale tore at the costumes of the sobering occupants.

‘What the fuck?’ Someone shouted to be heard above the din.

‘What’s going on? Can you see this too?’ Another howled.

I was only getting started. A mist started to seep up from the ground bringing their attention earthward. It was dense in patches, then shifting slyly to reveal what lay beneath its shroud; the battlefield. The revelers now found themselves ankle-deep in blood and gore; dismembered body parts, ruby flesh, pulsing blood, bone and gristle exposed and decapitated warriors, eyes pleading, mouths frozen in silent screams. The stench of Death permeated the room and the taste of iron lingered on the tongue. My beer supplier doubled over and vomited while his friends screamed. Ah yes, the satisfaction of a job well done. I turned and headed back towards the gateway to my own realm. Their vision would dissipate soon enough and they could wonder whether it was a mass hallucination or the drugs they were smoking or a combination of both. I knew I’d more than likely face a dressing down from Lugh but hey, I’d had my fun.