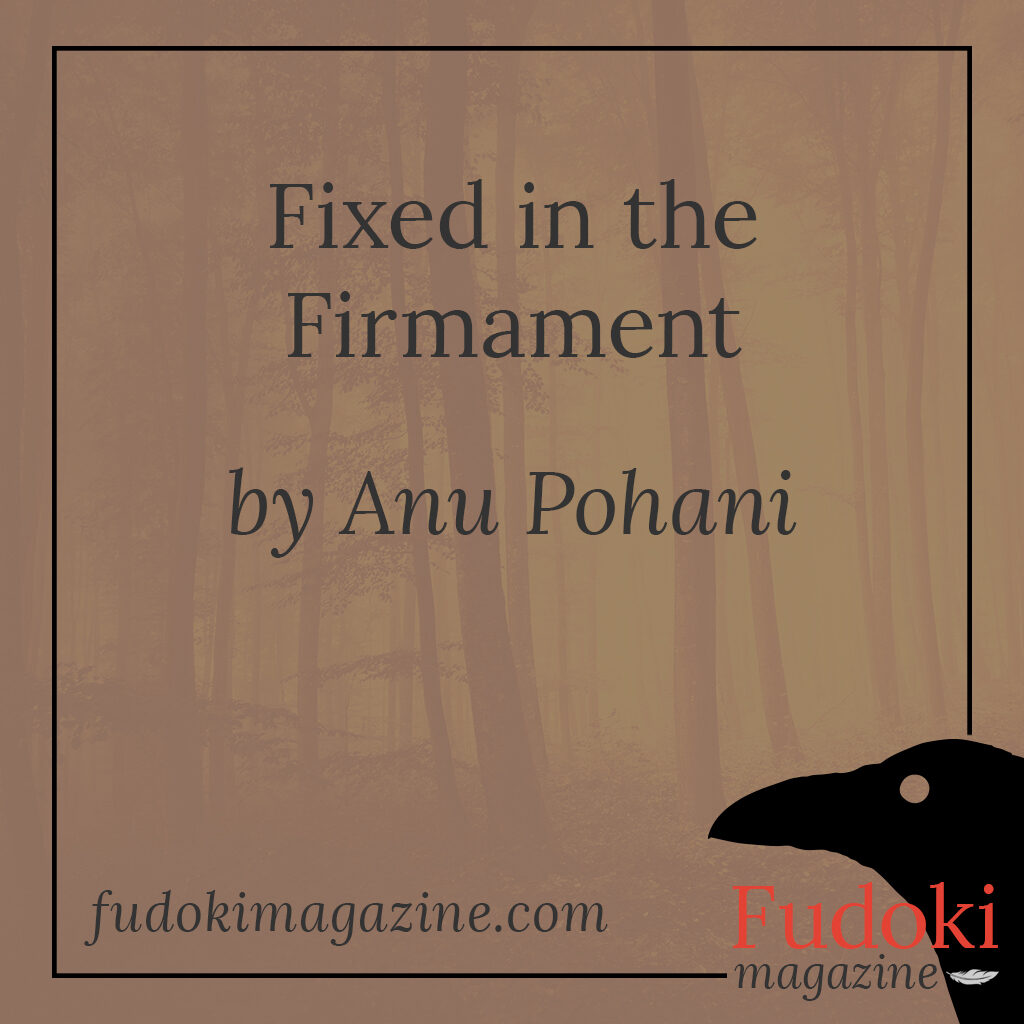 There was once a man brought to Earth. He was not of the Earth in the conventional sense, nor was he of heaven in the Biblical sense.  He had a mother, a father, many siblings.  Each day the sensation of the ground jerking erratically under his feet, woke him with a start.  Shifting and swaying, he felt the restless Earth.  The Earth pulled and pushed by forces beyond.  The forces, not mystical or unknowable, are unseen: the magnetism in the Earth’s core, the pull of the satellite Moon, the gravity of Sun, keeping the Earth from drifting too far from its comfort.  First, the sensation led the man to many doors, in search of ways to forget instability.

One day, tired and defeated, he surrendered, allowed the feeling to become a part of his being.  He realised he was flying, using the Earth as an amorphous hoverboard.  Subtly, or greatly each day, it took him places.  Thus, no matter that each day he woke in the same bed, the world around him shifted, he shifted.  Each day his body itself had portions regenerate.  The skin he wore today was not wholly the skin he had slept in last night.  Lungs, liver, kidneys all subtly regenerated daily.

Knowing these changes in his bones, was his liberation and his damnation.  His friends enjoyed mocking him as he never got quite as attached to the machinations of village folk.  He never minded much if the football team lost.  His children took his liberation as the stable force in their life.  His implacability lent them strength to feel fixed in space and time; attached to something.  He became a healer.  The patients who saw him, quite often were conspirators in their pain.  Stress eating, addictions to the couch, to alcohol, to nicotine, all in the name of forgetting the simple fact of impermanence.  On occasion, he attempted to use his revelation, hoping the knowledge would help the self-inflicted sickness that confronted him in each bloated face.  Of course, it was easier to believe things could be solved with a prescription.

Once there was a woman who loved the healer.  She was a priestess.  She believed in one simple fact.  Energy could not be created or destroyed; it can only be changed from one form to another.  In believing this, she clung to the permanence of the world. This was as accepted a scientific tenet as the changeability her lover preached.  She believed their love, a product of all the parts of a tangible, changeable universe, an energy that could never be destroyed.  Each day, she woke with a breath of energy, the same energy that moved everything from one place to another.  The same energy that carried her love to him every day.  Though space and time, cells and blood were subtly different, the energy they rang with was the same through time and space.  The healer never told the priestess the man she loved could never again be the man she met.  That each day he subtly was someone new, the only constant was transience.

In the beginning, she showered him with physical affection, left tangible marks of love, the smell of skin, the warmth of an embrace, the taste of a kiss, the sound of a song.  Until, the Earth pressed upon them.  Illness spread between them, erected a barrier between their bodies, created a dam breaking them apart in space and time.  In agony, laden with the weight of her physical heart, the priestess let go of his strong hand, turned her back on his enclosed form, felt the weight of both for the last time.

Despite distance, she sent her love to him every day.  In the force of an exhale, a butterfly in a tornado, she decanted the force of her heart, believing in the unity of Energy.  But, as the healer believed only in change, not even her love could be considered permanent.  Instead of reaching him, her love dispersed into small fracti, dancing in the ether.  The healer had not his own vessel to receive and pour forth energy.  His heart resided only in the physical dimensions, physical constructs, to them and their fate he was tied. Her love washed over him and through him without recognition. She sensed his being, looked for evidence of his existence, willed for a change that would not come.

She sought new answers.  She heard speak of a plain beyond them, in which, without the constructs of dimension, Energy was visible.  To find it, new tools were necessary. She knelt in front of the altar and closed her eyes.  With each inhale of breath, she looked for the ultimate source, the one that fed the Moon, the Sun, the stars, the people, her love.  She looked to the stars, and could feel the part of her, lodged in her healer, fixed in the firmament that moved and changed but always filled with Energy. She exhaled with no fixed target in mind.

Thus, the priestess reunited with the healer.