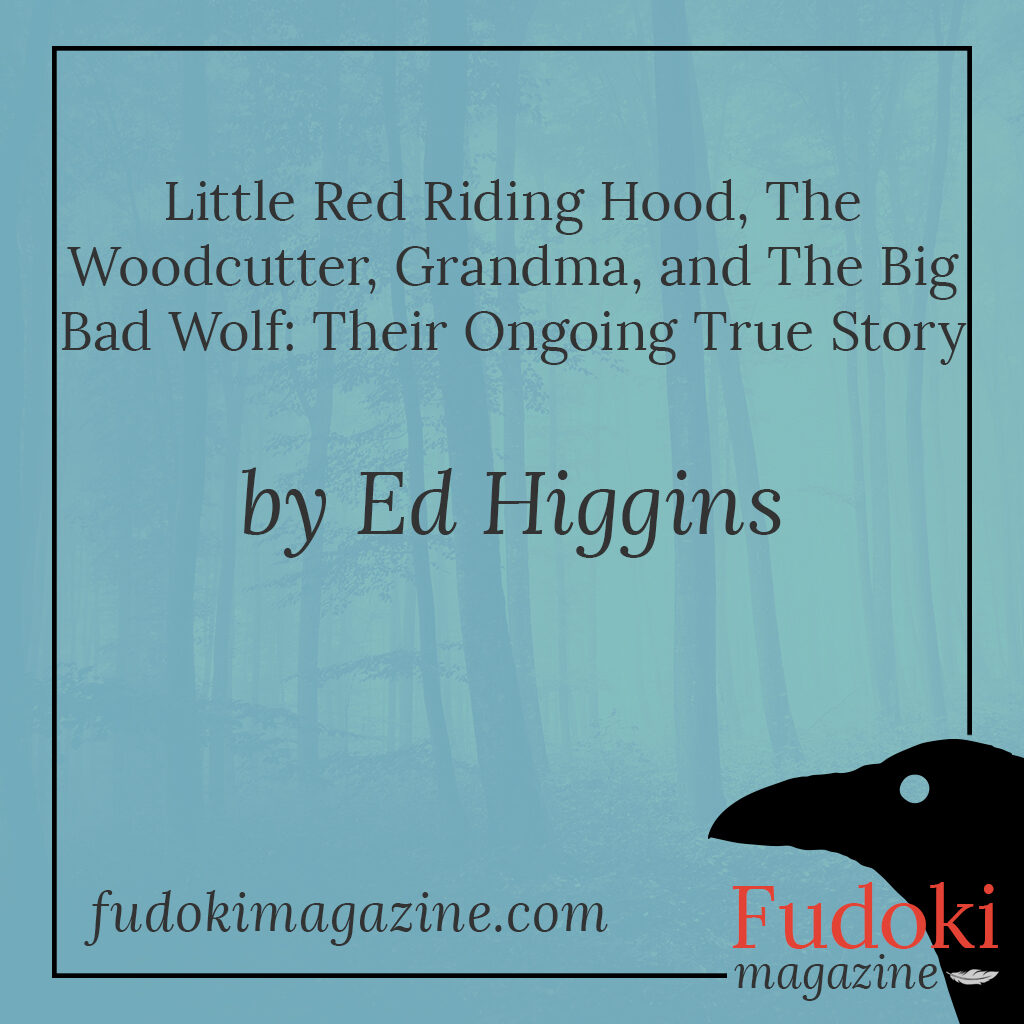 Grim though it be Little Red Riding Hood and The Woodcutter, with his hewing axe, eviscerate and skin the Big Bad Wolf, thus rescuing sickly Grandma. Grandma’s a bit worse for the wear after her couple of hours in Big Bad’s overstuffed stomach. But she cleans up nicely. In the backyard of Grandma’s cottage they fire-up the BBQ, rotisserie-spit the butter and garlic rubbed wolf carcass and wait for it to slowly cook. Meanwhile, they break out a couple of bottles of pinot noir from Little Red’s basket and drift into lazy afternoon conversation on a mild July day awaiting their yum later dinner. In a couple of hours they’ll toss onto the grill some corn-on-the-cob as well as some color-mixed bell peppers from Grandma’s nearby garden. Some scrubbed Idaho baking potatoes, too, popped into the cottage oven.

It’s been a helluva day they all agree. A bit of good fortune, The Woodcutter had been mere yards from Grandma’s cottage when he heard screams from Little Red when she finally realized the gruff-voiced, disguised, fang-toothed, and in Grandma’s overly tight nightie was in fact The Big Bad Wolf. OMG! Leaping from the bed where she’d mistakenly been cuddling up with her supposed grandmother, Red is screaming bloody murder and bolting for the front door. Big Bad’s scrambling after her but tripping up on the nightie’s floor-dragging hem, slamming himself face-first against the dinning room table and then onto the hardwood floor. Still screaming, Red drops Grandma’s rocking chair between herself and the fumbling Big Bad Wolf clambering to get back on his feet. Little Red manages to pull the door open just at the moment The Woodcutter has arrived at the stoop.

Quickly sizing up the situation, The Woodcutter allows Little Red to scoot by him as he raises his axe stepping toward The Big Bad Wolf: who’s only half risen from the floor yet realizes he’s about to have a very bad day. He called that one right. Within seconds his severed head is rolling across the living room, spraying a gory mess on Grandma’s hand-braided wool rug. Oh, shit! thinks Big Bad as he blinks out of existence. Some really bad shit going down here thinks the fast acting Woodcutter as he turns to comfort sobbing Little Red. Hush, hush consoles The Woodcutter, you’re safe now. But The Big Bad Wolf ate my Grandma sobs Red Riding Hood. Thus, the aforementioned evisceration and rescue of Big Bad’s swallowing Grandma whole.

The Woodcutter is a strapping young lad of sixteen at the time of The Big Bad Wolf axe hacking and Little Red plus Grandma’s rescue. Little Red’s recently turned eleven. Grandma’s somewhere in her late seventies. Big Bad’s six-to-eight years was pushing the upper limits for a wolf in the wild, although he was certain healthy enough before The Woodcutter’s descending axe. Little Red quickly develops an eleven year old tween’s crush on the handsome Woodcutter. Sensibly, The Woodcutter wants none of this—bad enough he already has an eleven year old sister he can hardly stand. Little Red Riding Hood and The Woodcutter’s sister, Amanda, become close friends. Little Red’s always eager to hang around the Woodcutter’s family home, mostly to secretly heartthrob over The Woodcutter—Amanda not infrequently teasing her about this. By the time Red’s slipped over the teen line, at around fifteen, The Woodcutter begins to take note of Amanda’s schoolmate’s physically maturing BFF. As he’s hitting twenty his hormonal interest flares into something more serious. At twenty-two with not-so-Little Red now seventeen they’re goofily, madly in love, setting up an online wedding gift registry. And by year’s end giddily marrying. The whole village gathers, in an echo of Bruegel the Elder’s The Peasant Wedding: which abounds with catered microbrew abundantly flowing, pipes apiping, with copious pizza passed around to table-seated guests. Little Red’s radiant, of course, in her signature red-hooded cloak. While smiling Woodcutter wears a red waistcoat slyly honoring his bride’s famed attire.

Six months later their daughter is born—in baby shower invites they shamelessly note a very pre-mature birth for their healthy girl. On a sad note Grandma, who had lived through the joyous union of Little Red and The Woodcutter, has not made it to see the birth of her great granddaughter, the child named Little Amanda, after Aunt Amanda.

Red, The Woodcutter, with Little Amanda, decide it’s time to move on from their back-woodsy existence for something holding more entrepreneurial opportunity. They lease out and move from Grandma’s cottage (which Red had inherited) heading for The Big City. The Woodcutter enrolls in The Big University and in due course, after earning a B.A. in Business, goes on to earn his M.A. in Forest Management. Little Red too earns a B.A., hers in Business and Entrepreneurship at the Big University before finishing her M.A. there in Fashion Design. Thankfully, much loved Aunt Amanda has also moved to The Big City to help raise Little Amanda while her parents are busily earning their degrees.

Degrees in hand, the family heads back to The Village and The Forest. The Woodcutter, much to everyone’s delight, is quickly appointed Manager of The Forest. Little Red soon sets up an Etsy site and is barely able to keep up with orders for her signature red-hooded cloaks. She eventually trains and brings into her scaled-up business Aunt Amanda. Their red-hooded cloaks (sorry, only in red, but wool or cotton available and ankle to mid-calf lengths) are five-star items with rave Etsy customer reviews. Part of RRH’s branding is “a wolf-embossed solid metal button closing at the collar with a durable leather loop.”