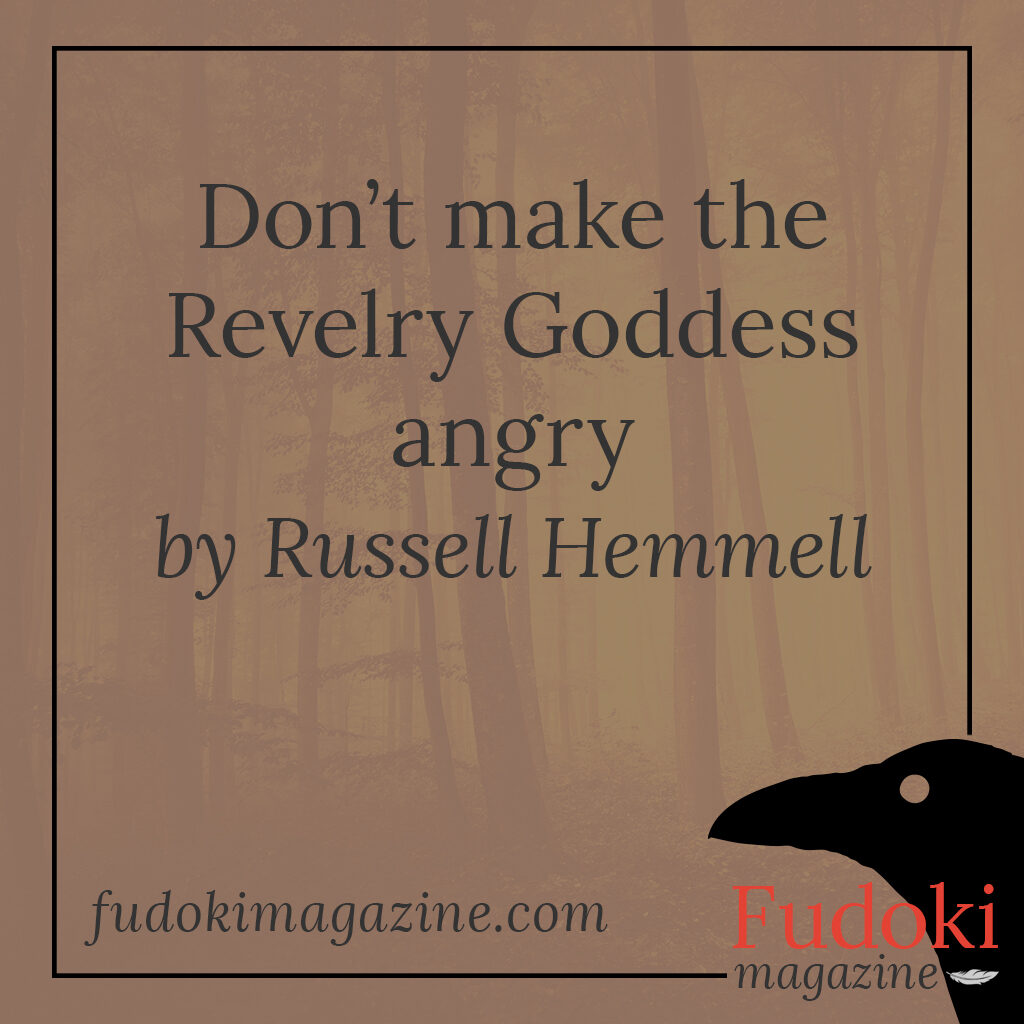 “Here we are again.” Uzume shook her head in exasperation. “She’s just too bad.”

“No, just a tad difficult,” her cousin replied with a snicker.

“Tell them to poor humans, Tsukuyomi.”

“You tell them – they’re your protégées, aren’t they?”

Uzume sighed, looking down at the distressed billions walking on the blue planet.

It was a day of stupor and fear, it was a day of puzzled stares. It was the day of the night-blue eclipse – that went on and on. A day for everybody to remember, she told herself, even though feelings weren’t the same among creatures beneath and above the blue sky line.

It was not a normal solar eclipse. The sun got pitch black, darting out tongues of flames and glowing embers of doom. Like a volcano in eruption, hot cinders sprinkled onto the dry earth, blazing and scorching. Every morning, the rising ball of dark fire wrought havoc and despair, and at night dead bodies and animal carcasses covered the burned soil, while sound of tears could be heard from the Gobi Desert up to the Fuji-Sama.

“Who is responsible for all this?” People asked in dismay.

The shinto priests of the Ise Shrine had no answers to those anguished looks and terrified faces. They directed their chants to their tutelary goddess, Uzume, and asked for her merciful intercession.

“Who is to blame, Gracious Goddess of Revelry? Is it a punishment for our sins?”

“Humans have no such power – to damn or deliver,” Uzume reassured them.

More than the Great Persuader, I should be called the Gods’ Whip, she thought, while she went to deal with the culprit. She found her in the usual Heavenly Rock cave, striking in her beauty, magnificent in her composure. Long green hair on a greenish-white skin, Amaterasu the Goddess of the Sun sat silent and immobile like a praying mantis. Uzume knew the capricious goddess only too well.

The deity didn’t make any sign to have heard Uzume’s words.

“Are you deaf on top of being a selfish, wicked and useless hag?”

The last word produced the miracle of raising Amaterasu’s divine eyelids, and a flash of anger sparkled up in the pupils of the Sun Goddess. “Who have you called hag?”

Uzume sneered with a malicious wink. “I forgot to add vain to that list. Consider it included.”

Amaterasu dignified her visitor of some attention. She stretched her long legs and stood up, waves of hair like glittering seaweed dancing on her body. She extended her arms in a gesture of surrender, showing her delightful, pearl-like neck and the tender flesh of her stomach.

“I’m getting tired of your quarrels. First you got angry with Susanoo.”

“He had more than deserved it. And as usual you got in the way, Uzume, tricking me out of this place with your disreputable dance.”

“Then you fought against your other brother, Tsukuyomi.”

“He had to learn not to come out in the sky when I’m in my full splendour – and steal my audience. I have been even too lenient with that young scoundrel.”

“And finally you made the whole underworld an ungodly mess, waking up the dead, releasing the infernal beings to the surface and dispatching angry ghosts to the eight corners of the Earth.”

“That was retribution for having claimed my maid before her time had come. The Lord of the World of Darkness has become more cautious since then.”

Uzume shrugged. “Who has made you angry this time?”

The Sun goddess remained still for a moment, her lips pouted, her regard sullen. “Nobody. I was bored – and tired to be the most beautiful thing in a universe of ugliness. I wanted something different.”

Uzume was on the point of throwing at her an avalanche of obscenities but bit her tongue. Restraint, she growled mentally. “And you blasted the whole planet for this?”

Amaterasu shrugged. “Why do you care? Humans are creatures as selfish as I am, and nastier, if you think at how limited their capabilities are.”

“Forget humans, we won’t reach an agreement about them anyway. What about the other species?”

“Life doesn’t need a justification to be precious.”

Amaterasu turned her head to face the barren wall of the cave and Uzume realised she was being dismissed. She was on the point of leaving the cave, already thinking to what she could devise this time to deal with Amaterasu’s qualms, when the other spoke again, her voice emotional, like a character of the Kabuki Theatre.

“I wanted to create something awesome, Uzume – awesome and stunning as I am. Something to be remembered forever.”

Uzume stopped and turned her head to observe the goddess. She was still facing the wall, but on her cheek a tear shone up, like a lonely diamond in the night. Uzume didn’t reply, and left.

The next morning, looking at the monstrous ball of dark fire in the sky, Uzume decided something had to be done. Something to be remembered indeed, if that was the Sun goddess was after. She then searched for an iwakura – a magic stone of gorgeous features but inhabited by an evil spirit – and, careful not to touch it with her bare hands, she left it during the night at the entrance of Amaterasu’s cave. The stone had the power of causing a disfiguring plague to the ones, men or gods, who come into contact with it, and so it did happen with the Sun goddess. The morning after, Uzume came back to the cave and handed Amaterasu the sacred Eight-Hand mirror. The Sun goddess watched in horror as dark spots appeared on her magnificent face.

“How silly I’ve been – it was you that brought the stone.”

“I won’t imagine anybody else offering you gifts.”

“What have you done to me?” Amaterasu howled.

“Retribution – your favourite word – for your last tantrum.”

“Heal my face and restore my beauty.”

“In time. You take that dark ball of fire away from the sky first.”

Bending to Uzume’s conditions, Amaterasu left the cave and with a gesture she quenched the fire of the dark ball. She took it with her lithe hands and drowned it into the deepest of the ocean, where Susanoo grabbed it and buried it forever. Then Amaterasu sat on the burned grass, looking at the mirror. “The spots are still there, Uzume,” she wailed.

“Don’t worry, Amaterasu. They’ll fade away in just few days. But they will come back. Every year, in the day you have first created the dark ball of fire, they will reappear. And reappear again. And you too will remember it forever.”

Uzume left, leaving a crying Amaterasu touching her face in anguish. She never made a fuss or crossed Uzume again, and humans welcomed back their sun shining in the sky with sighs of relief.

In the sacred shrine of Ise, the priests still worship Uzume the Great Persuader and tell the story of the origin of solar spots to children. Every year, they show them the Sun’s blemished surface flaring in pain, like a desperate deity atoning for her sins. They teach the kids that life has to be protected, that nothing, even the Sun, is untouchable and all-powerful, and, more important than anything, never to make a gentle spirit angry.