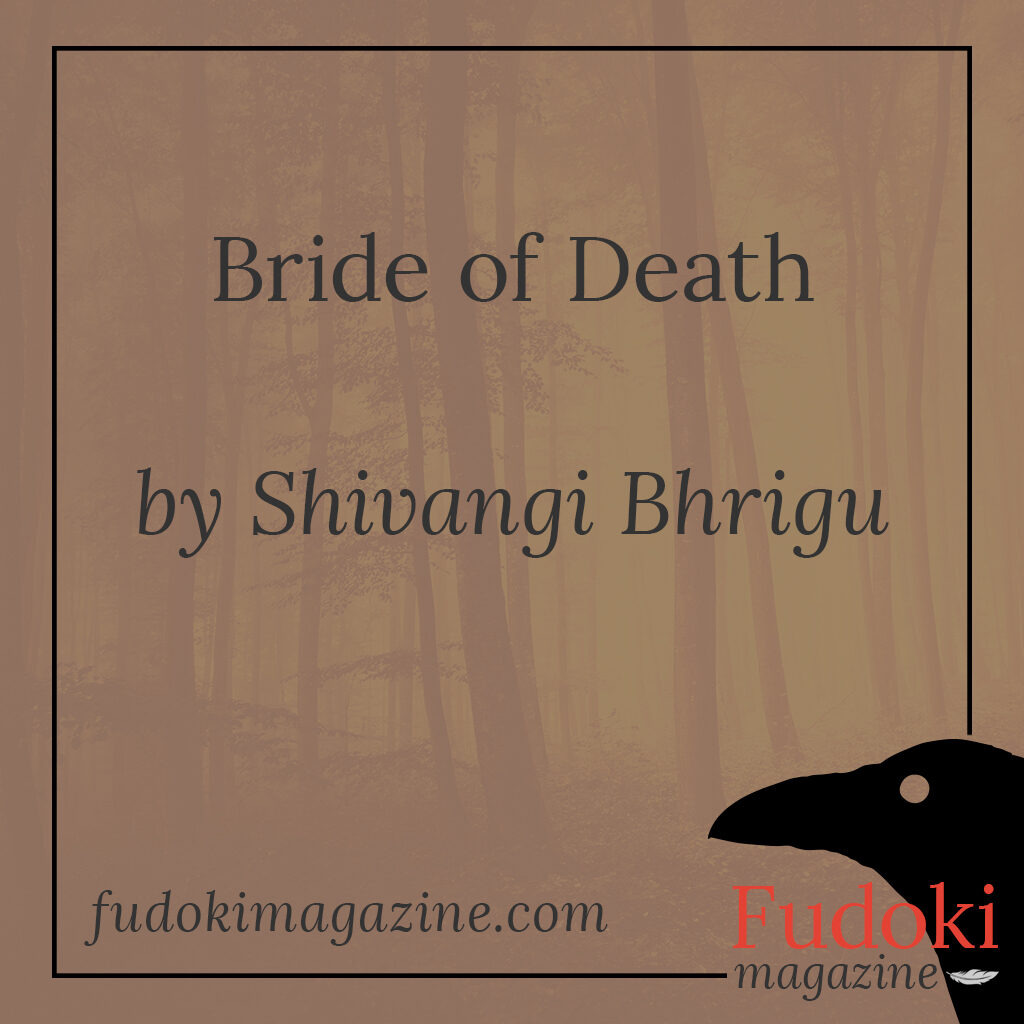 She was born only minutes shy of midnight, to a thunderstorm clamouring her arrival. At the very moment her small body wetly slid into the world, her father, waiting outside, saw two bolts of lightning branch out to each other and meet. The sight was terrifying. The sky seemed to split asunder for an instant before plunging the world in pitch dark while the new-born’s cries pierced through the roaring rain and frightened gasps.

Her own family cherished her. After four boisterous sons to keep them on their toes, her parents were grateful to have a little girl to spoil.

Jhankaar, they called her. A tinkling whispered sound. The contrary of the cacophony that had welcomed her into the world. The sound of her anklets that rang in the house everyday since she started walking. The softness of her voice that she never raised. Jhankaar.

They had never quite imagined she would one day leave them, their beloved shy daughter.

Until the day he came.

It was the morning of her nineteenth birthday. Clouds of steel rolled in, preceding him, blotted out the sunshine. People took to their homes for shelter from the impending storm.

Instead of rain, it was he who arrived, riding a water buffalo and followed by a fanfare of impassive warriors, all garbed in the dark colours of the night, their rides of buffaloes and bulls and horses the colour of velvety soot. They moved in impeccable synchrony and ear-splitting silence, heralding no emblem, so nobody could fathom where they came from.

When the procession stopped just outside their doors, her parents came out, shaking with fear but putting on brave faces nonetheless. The man descended his ride to speak to them, his voice so quiet nobody could hear what he said but it must have been shocking, for the mother fainted promptly.

Jhankaar watched from the shadows of the darkened house. Her brothers had all been away, working the fields, and had not yet returned. Her father kneeled, half holding her mother and half, it looked to her, begging, imploring to the man towering above him.

Heart hammering and breaths shallow, she stepped around the pillar behind which she had been hiding, walked to the door herself. Her anklets jingled again, and his eyes seemed to find her very easily through the darkness that shrouded her inside the house. She felt her face burn from his stare but refused to lower her eyes. That would be weakness.

The closer she got though, the more her fear ebbed as something else pushed in competitively, unfamiliar and electrifying, uncomfortable and fascinating all at once.

Maybe, she frowned, it had something to do with his preternatural handsomeness. She stood on the threshold, behind her kneeling father and unconscious mother, crossed her arms on her chest and regarded him.

He was built like an oak, a good foot taller than her at least.  Dishevelled locks of hair framed a rakish face. A cropped beard veiled the lower half of his face but his obsidian eyes glinting at her spoke of amusement. She squared her shoulders in annoyance, her eyes drifting to the human skull perched on his left shoulder, its mandible missing and the teeth of it sinking into the thick leather of his armour. Smatterings of dark stains, perhaps blood, against the aging ivory sent a shudder down her spine.

Jhankaar tore her eyes away from the gruesome object, back to his face and proffered to him the same question her parents had, albeit with less courtesy and her words laced with more daring than she felt. What did he want? He could take whatever he wanted and leave, along with the turmoil his arrival had brought. His reply was an appalling one but, a part of her admitted, not one she had not expected.

You, he said very simply.

She pondered over it before stepping around her parents, closer to him, shielding them. You will not hurt my loved ones, she demanded.

That was not my intention, he shrugged.

She inhaled sharply, not overly willing to trust his words. If she refused… What if she refused? She would not have to find out the consequences though, would she?

Even as her father and newly-recovered mother sobbed, she donned the wedding attire he had conjured from his procession, the colour of it dark blood red, delicately detailed with silken garnet blossoms of mango and stars of white diamond and onyx. She let him hold her hand, so small against his, throughout the rituals that bound them as husband and wife. She bade farewell to her parents and her brothers, who arrived moments after the wedding was concluded, with a tearful but reassuring smile. She gave him her hand again to hold and so he could haul her up onto his mount. She hid her face and the streams of her tears in his chest when they departed from her village so her family would not be more miserable.

She must have fallen asleep because when she lifted her head from the warmth solidness of his, they were marching across an infinite expanse of sable sand, so wet it was glassy, filled with constellations she did not recognise. When she looked up at him, full of questions, he was watching her already, his lips curved into a smile and his gaze adoring. Jhankaar found herself lost for words.

My queen, he whispered, my love, do you still not recognise me?

She shuddered against him and she felt his mouth brush against her temple in a kiss.

In a past life, he breathed, we were one. In time, perhaps, you will remember. Or, we have all the time for new memories, don’t we?

One thought on
“Bride of Death”