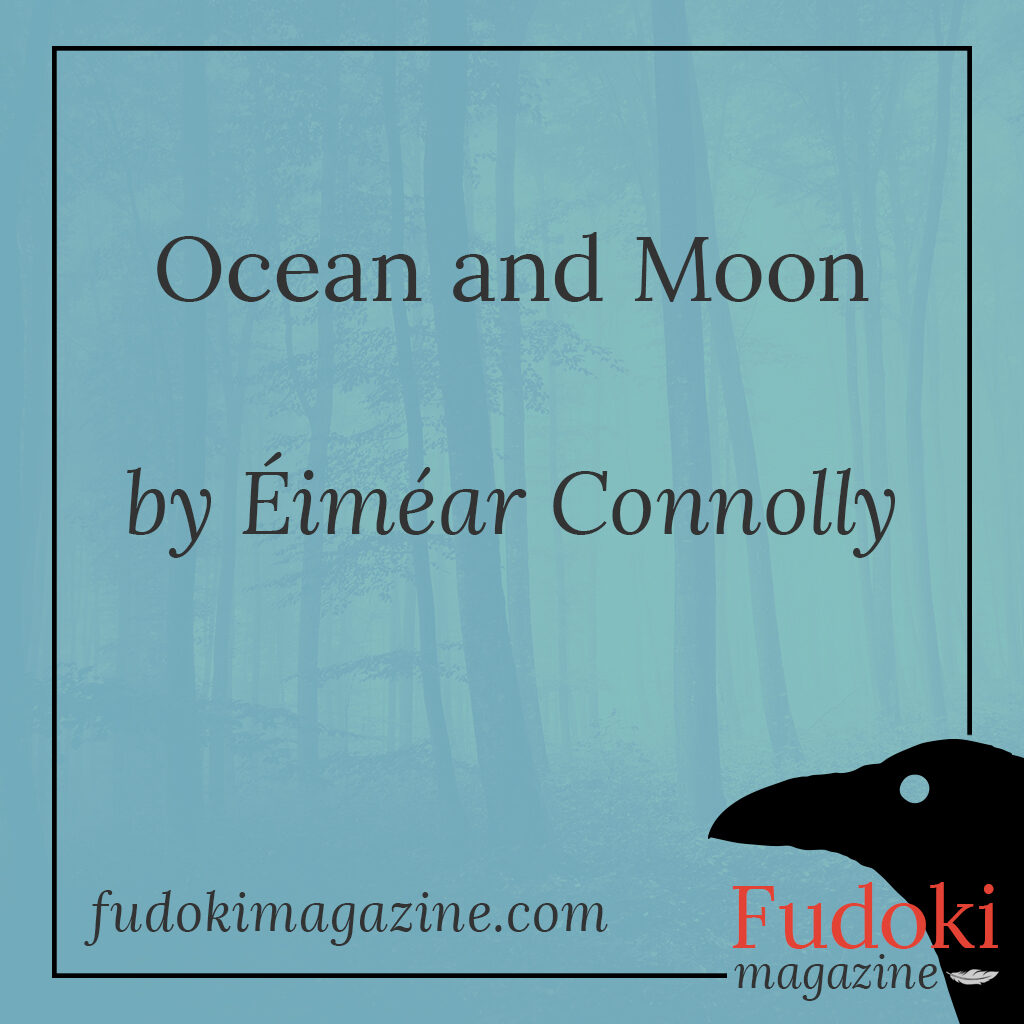 The world shifted when the Ocean first beheld the Moon. The Ocean stretching towards moonlight, the Earth sounding an unheeded warning. On that first night, the Ocean humbled herself, spread wide, ever reaching, hoping to catch the Moon’s light in her depths. Fair Moon revelled in her power. She leaned down to the Ocean, just out of reach, singing to the Ocean’s wild heart. Birthing tides.

Oh, that savage, beautiful Moon, she sounded how Autumn feels, of electric nights running wild, of blood and sin. Under an October sky, the Ocean made her first mistake. An offering taken from the Earth’s hands and placed at the Moon’s feet. Vulnerability is a locked casket; the Ocean gave up her key. The Moon delighted in the Ocean’s gift; she sang each night for the Ocean. So, it was the Ocean fell under an incantation cast in the Moon’s haunted voice, pulling her, shifting her, mutating her. At sunset each night the Ocean rose, swaying to the Moon’s song, yet Ocean herself remained silent.

It was in Winter, while the Earth slept, that the Ocean offered her second gift to the Moon. One night, taking in the fullness of the Moon’s beauty, she lifted her rich voice to the song, harmonising perfectly with the Moon. The Ocean had given her voice to the casting, not knowing that she would have to see it through to the end. The Ocean kept vigil for the Moon, enthralled by her. There were nights of shadow when the Moon wasn’t to be found. Still, the Ocean searched for her. She was driven wild, scavenging the world, seeking any sign of the Moon. The Earth shifted, uneasy in his rest.

The Ocean spoke her truth to the Earth, of her longing for the Moon. Even in his slumber, the Earth heard her words, rumbling in his rest. Yet the Ocean continued to seek the Moon. Sometimes the Ocean, in her salted mouth, could taste all the things that didn’t happen between them, with an ache that was drowning.

The Ocean, in all her temperamental beauty, had never belonged to anyone. She knew belonging with someone was a different thing. She had thought herself happy in the arms of the Earth, but now as she sang with the Moon, she was uncertain, what if…what if…what if? She was dragged to the brink of madness, always pushing, always pulling. Never steady, never ceasing.

One night though, the Moon was cruel. She whispered to the Earth what she thought of the Ocean, of all the power she held over her, how those beautiful waters, with all their bounty, were hers for the taking. The Earth rumbled his anger at the conceit of it. He told the Ocean what had passed and low tide came, as she made herself small. Humiliated. The Moon had done it unkindly, knowing the Ocean in her pride would feel the cruelty of it. The Ocean had found her first truth about the lunar creature she opened herself to; she was a quiet ego capable of great hurt hiding behind a beautiful face.

Even in her pain, the Ocean was foolish, unable to resist the Moon. She knew the Earth was crumbling beneath, eroding away from her. She felt his sorrow but, even in her humiliation she still longed for the Moon. Her only relief came when she dived deep into her depths, letting its darkness lull her to rest.

In the Spring, the Ocean slipped out into the world again. The Earth was pleased when on seeing the Moon again, the Ocean turned away. The Moon came closer, disconcerted, seeking to pull the Ocean back into her thrall. Ocean made a choice; she would allow herself a final song, an unknown goodbye. Then it would be done.

Ocean knew that this had to be the last time she gazed on the Moon’s light, this had to be the last time she heard their merged voices, joined their songs. With every note, her waves crashed, and her waters heaved, feeling the grief of it. When it was over Ocean knew she had made the choice that needed making The Ocean took all of herself far beyond the reach of the Moon’s light. She was no one’s for the taking but her own.

Ocean was deeply wounded; it took seasons for her to heal. She called everything that was hers home. Pulling all she had given back from the shores of the Moon. She felt the tender scars forming, she sang of her grief in caves far below her surface. She shattered and reformed over and over and over again. Seeking a new truth.

The Moon felt the change but was powerless to stop it. Once the Ocean took back her gifts from her shore there was nothing to be done. She watched, helpless, as the Ocean returned to herself, and then to the Earth. She saw how the Earth treasured the Ocean in a way that she had never thought to. She felt her loss. The Moon believed herself wronged, for who was Ocean to leave her? She waxed and waned, finding herself low. The Ocean knew this, and still she turned away from the Moon’s light. The Ocean’s waters would offer no solace, no matter how the Moon longed for them.

Even now, centuries later, when the Moon comes close to the Ocean, the Ocean chooses to resist her gaze, to be made small, she rises high in her own melodies, singing songs that are more powerful than any that Moon could sing to her. It is the music of her depths, the songs of her wild heart, of her freedom and her choices.

This is what it is to always know the pull of waves and the play of moonlight on water.