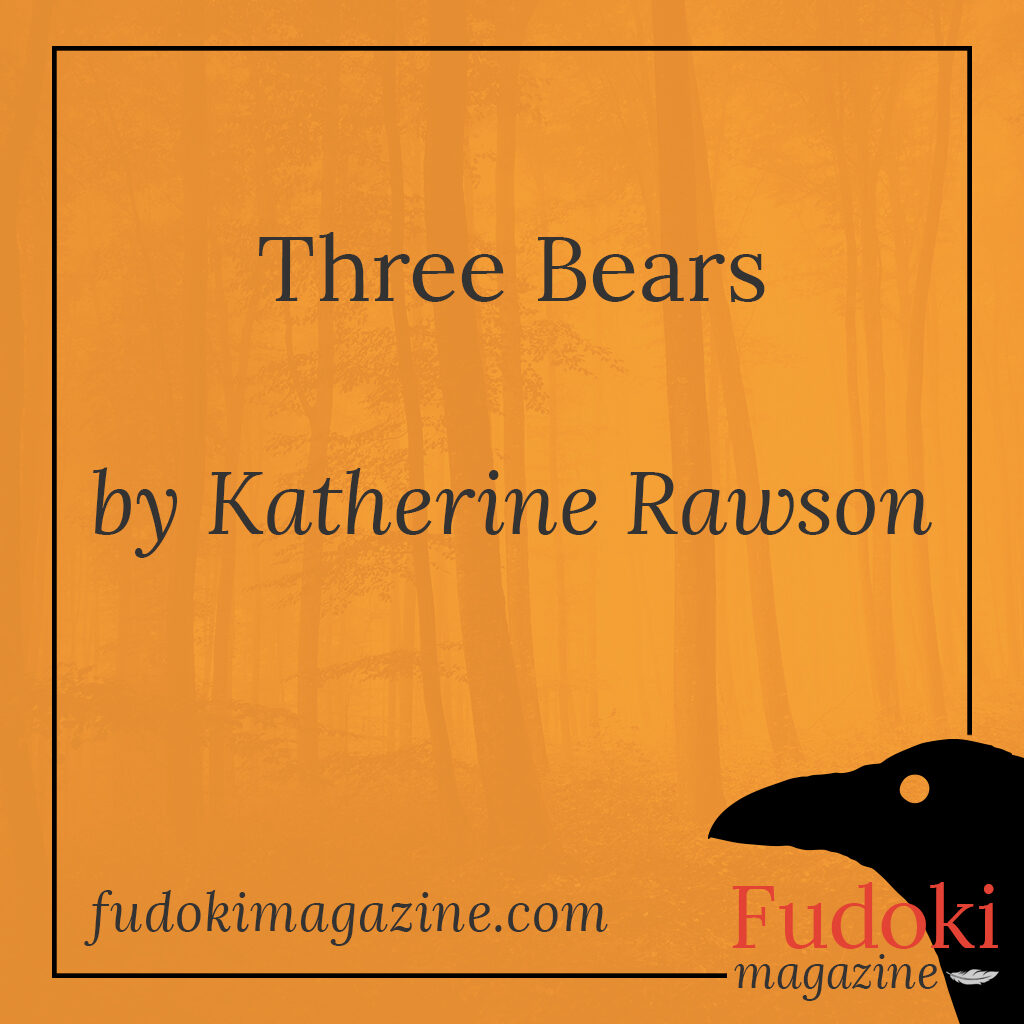 When the smell of burning porridge wafted past Goldilocks’ nose, she realized she had stayed on the phone too long. “I’d better go,” she said, hanging up the phone and hurrying to the kitchen.

“Drat!” she said when she saw the blackened pot on the stove. “It’s ruined. I’ll have to start all over again.” She opened the cupboard, but the shelves were empty.

“Oh, dear. Oh, no,” she moaned, rubbing her tummy. “I’m so hungry! I’ll have to go to the store for more porridge.” She grabbed her shopping bag and headed out the door.

Three bears were lurking in the woods nearby. As soon as they heard Goldilocks’ car leave the driveway, they ran out of the trees and across the lawn. When they reached the patio, they found three chairs arranged in a circle. They sat down.

“This is pleasant,” said Papa Bear, looking around. “The garden is lovely this time of year.”

But Mama Bear kept twisting around in her seat.

“This chair is too hard,” said Mama Bear.

“Do we have to?” whined Baby Bear. “My chair is just right.”

“Come along, Junior,” said Mama Bear. “We’ll find better things inside.”  She got up to follow Papa Bear, but Baby Bear stayed where he was.

Papa Bear pushed open the screen door and stepped into the kitchen. He looked around and sniffed. “Someone’s been cooking in here,” he said.  “It smells like burnt porridge.”

“Porridge!” said Mama Bear as she lumbered through the doorway after Papa Bear.

“Porridge!” said Baby Bear jumping out of his patio chair. As he jumped, the chair tipped over backwards and broke into several pieces. “Oh, well,” he shrugged, looking over his shoulder at the ruined chair. Then he scrambled into the kitchen after his parents.

Papa Bear found the pot of burnt porridge on the stove, and he picked it up to take a taste. “Ouch!” he exclaimed. “This porridge is too hot!” He let the pot clatter to the floor.

The three bears sniffed around the kitchen. Papa Bear checked the counter tops. Mama Bear peered under the table.

Papa Bear took the box in his paws, squinted at it, then put his glasses on. “P-p-p-or-i-dge,” he read. “Porridge. It says porridge.”

Baby Bear jumped up and down with excitement, but when Papa Bear turned the box upside down, nothing came out.

Just then the three bears heard tires crunch on gravel.

“She’s home,” repeated Papa Bear and Baby Bear. The three bears looked at each other, then turned and ran out the door and across the lawn.

But the bears disappeared quickly into the dark woods and Goldilocks couldn’t see where they went.

“Phew! That was fun,” said Papa Bear when they arrived, panting, at their cave.

“It sure was,” said Mama Bear, fanning herself with her paw.

“But we didn’t get any porridge,” wailed Baby Bear.

Papa Bear patted Baby Bear’s head. “Next time we will.”

“And next time,” said Mama Bear,” I’m not wasting any time on those silly patio chairs. I’m going right upstairs to take a nap. I hear Goldilocks has the softest beds.”

One thought on
“Three Bears”