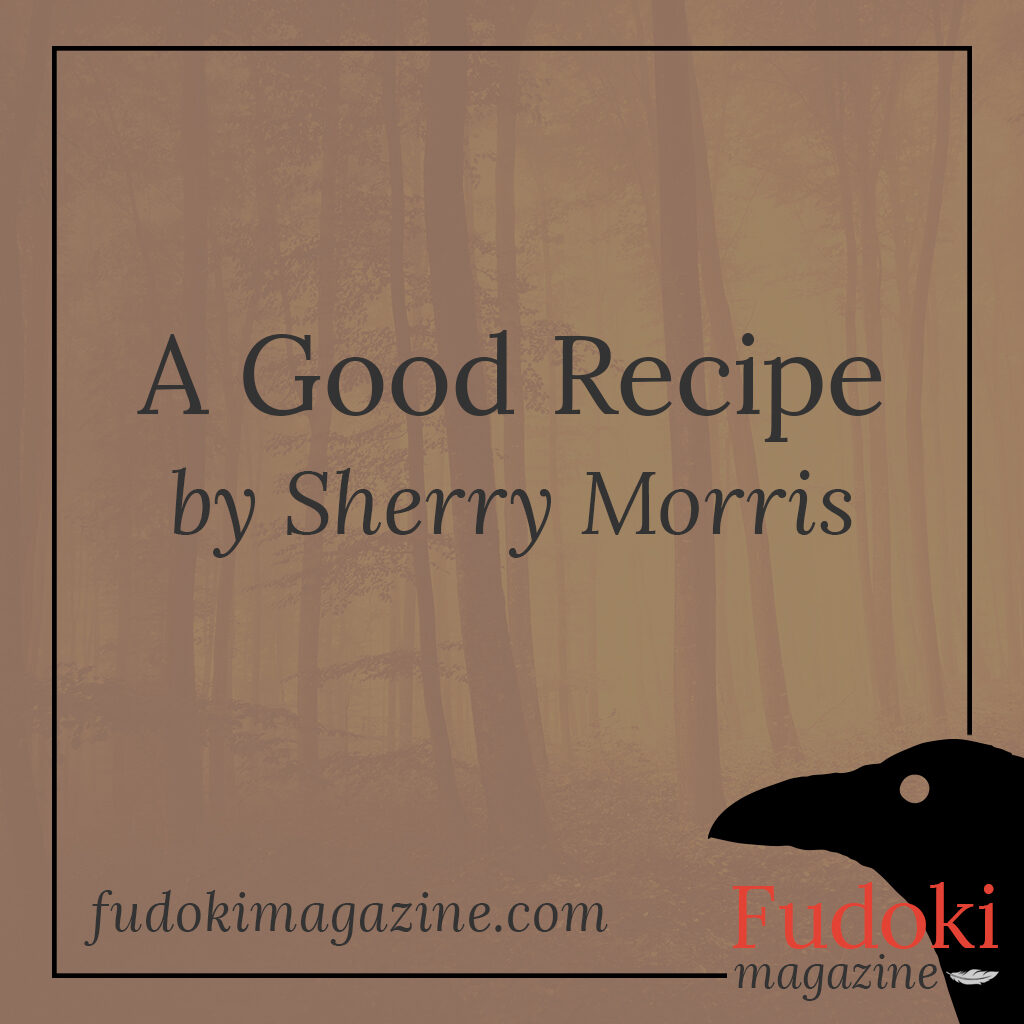 We adored Hilde’s bakes, but it was her bonbons we craved. Whichever rainbow colour we received, these perfectly round, fondant baubles were magic. One person would exclaim lemon-meringue, another swear sticky-toffee pudding, while the third said cinnamon – while sharing the same titbit. When we asked how this could be, Hilde’d smile and duck her head behind tiny, tiny hands tipped with blood red nails.

City folks wanted her complicated concoctions — towering tiers of sponge containing mounds of piped icing or cream. Our tastes were simpler:  punchy jam tarts, gooey banana breads, spiced carrot cakes. We wondered what the outsiders made of the trademark treats that always topped her bakes.

Walking the forest path to her cabin, we’d find her in the kitchen, stained apron over her slight frame, flour dusting her chestnut hair, remnants of the current creation on her full garnet lips. With flawless pale skin, she looked impossibly young; elderly women whispered she’d always been young. The slippers she always wore were bright green silk with gold-leaf embroidery. Tiny and pointed — perfect for an elf.

We never asked the recipe. We knew our bakes wouldn’t compare. Just as our mothers knew and our mothers’ mothers knew. Hilde never wanted money from us. Instead, she’d ask us to visit sick friends, call elderly relatives, read to children. We’d oblige, then feel compelled to do more:  donate to charities, run foodbanks, organise protests.  At night, we’d drift off to visions of the comfort we’d brought, the sweet taste of goodness in our mouths. We’d wake wanting more. Dubbing her treats Hilde’s Do-Goods, she’d smile, look towards the hill where the ogre occupied his white house, and nod with satisfaction.

Eventually we noticed she was shrinking. Not the hunched stoop of age, but becoming smaller in size. We’d find her standing on a stool to reach the counter. Noticed her head was level with the cooker. When she became the size of a cat, we asked. She told us not to worry, but we did.

One day we found only her slippers, askew, on the threshold of the door. Distraught, we trudged home. Storms came, clouds like black sheep descended, dulling colours, tastes, sounds. We stayed indoors. Heard dark rumours. Wondered who’d save us.

We fell into a sleep where tiny emerald shoes filled our dreams. Upon waking, we rushed outdoors, became disoriented in the murk. When green pixie pantofle appeared, parting the fog, we cheered. Followed them. They led us to Hilde’s cabin. There we divvied up her baking things, searched for recipes, discovered instead a grindstone out back, the wheel stained a curious shade of red. We left it behind with the slippers resting alongside.

Then we mixed, measured and mused. Our bakes lacked the luscious flavours of Hilde’s, paled in comparative look. But we remembered the kindness of cake, the desire to spread good cheer. And we discovered, in some unknown moment, when our backs were turned, whether for a blink or a sleep, that when we looked again, a single bonbon topped our bakes. And we knew our recipes were good.