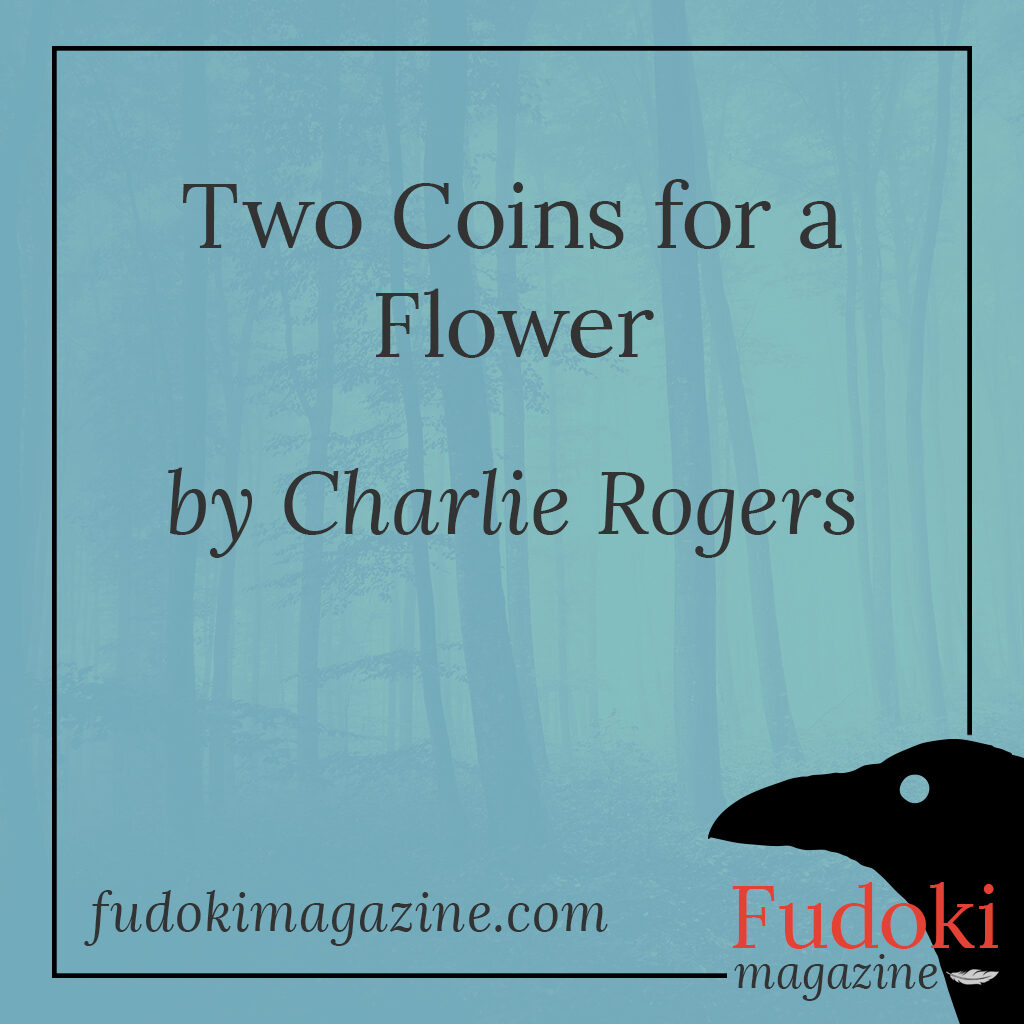 The little boy rubbed the two coins together in his palm, generating a faint scraping sound. The noise was unfamiliar because he’d never before possessed so much money. Not until this morning, when he’d spotted them hidden in the dust. He’d been observing the plant merchants setting up their wares when the glint of metal attracted his gaze.

Every year during green season, the merchants came to this forest clearing and constructed a misshapen circle with their tables and makeshift booths.

Visitors traveled vast distances for the annual opportunity to peek at the unimaginable wonders of the flower show.

The boy recalled his father carrying him here once, many years ago.

Together they’d laughed as they selected a bouquet of pure wonder, crafting a rainbow more magical than any found in the sky. His father’s laugh had been hearty, infectious.

The boy kept the memory of that afternoon as one of the last he possessed of his father. It stood alone as the happiest.

Darker days followed. With his father gone, his mother’s expression sagged into a permanent frown. The flowers, the magic, wilted.

He approached the nearest table, arrayed in monstrous yellow flowers, each bigger than the boy’s head, each petal the length of one of his arms. “I would like to buy flowers for my mother.” He wished his voice could sound deep and adult, serious, but he was only a little boy.

The merchant lifted his gaze from the crumbling pages of an ancient book and flashed an avuncular smile. He stood a hair taller than the boy but much wider, wearing a pleasant and inviting disposition. Age wrinkles rutted into his face so deep it appeared he might unfold at any moment. “How sweet, how wonderful. I’ve enchanted my flowers with size but also bounty. These cut specimens produce seeds to blossom for all of eternity.”

The boy studied them and imagined struggling to carry a flower so mammoth home. Their hue was dull, a sad yellow, reminiscent of a fruit that would never finish ripening.

“Are there other colors? Red?” The boy wanted vibrant, cheerful; these were the opposite.

The merchant shook his head, creases lingering where his smile had faded.

“Oh.” The little boy, aware he would not stay little for much longer, offered a shy, apologetic smile, and stepped to another table.

The next seller had arranged her flowers in earthenware vases, each turquoise petal peeled back to reveal red stamens, flopping like dog’s tongues.

“I’m thrilled you visited my table!” She reached to touch the boy’s shoulder, but without warmth, and didn’t smile. Her gray hair hung in braids that reached down to her ankles. At her feet, withering vines bound the braids together. Her demeanor made the boy uneasy. “Pull one from a vase.”

The boy did as instructed. When he touched the stem, the petals deepened their shade. A lovely trick, and it sparked a memory: his father’s laughter, so long ago.

The boy found her appearance frightening and shrunk backwards, but he also hoped to appear agreeable, like an adult, so he clenched the broad stem. He exclaimed with surprise and some joy as the flower fired a tiny dart. It struck the table, then vanished in a magnesium flash. A burst of color, of magic, then gone.

“Your little friends will love these!” The merchant threw open her arms, an embrace wide enough to encompass the width of her table.

“I only want to buy flowers for my mother,” he said, uncertain.

“Try the next table.”

She turned away from him, tossing an impatient gesture towards another seller.

The next merchant was younger, but stern. He stopped the boy from touching the delicate flowers that lay across his sturdy wood table. “These buds are magical, so be careful, kid.”

The merchant sighed. “I’m busy. You got money?”

The boy opened his palm, exposing the coins stuck to his skin. The wet metal exuded a strange odor, and the man laughed, cruel.

“Look kid, all those coins will buy here is pity. Go home and get your parents if you want something.” He turned his attention to another customer.

The little boy nodded, stunned, his lip quivering. He hurried back into the forest, angry at himself for coming here. So silly of him. So childish and stupid. He’d ruined the memory of the flower show, the last happy memory of his father.

Back then, he didn’t understand money. All the merchants encouraged his father to browse their products and nobody yelled, nobody was mean. The boy chose a wide selection and his father bought them all. His mother had loved the bouquet. Everyone had been joyful that day. Now he’d ruined it.

The boy stopped underneath a tree, collapsing in the dirt to cry. Soon he’d be a real adult; the cruel, uniformed men would steal him like they stole his father. He shuddered and sobbed, fearing his mother would never smile again. He only hoped to witness her brilliant smile once more.

Through the blur of his tears, he spotted something underneath a thicket of brambles. A pale purple flower, or perhaps it was periwinkle, lay flat against the ground, unable to penetrate the web of branches above it, unable to stand up straight. He crawled closer. Compared to the wares he’d witnessed earlier, this flower was unremarkable. Not the size of his head, not even the size of his empty palm. Its petals were ragged, neither enchanted nor magical. The little boy thought it beautiful.

He reached under the brush to excavate the plant to its wiry roots, wielding a sharp rock. Once successful, he cupped it in his tiny palm.

The little boy would bring it to his mother, and they would replant it together, somewhere they could see it every day. Wherever they placed it, somehow it would find the sun.

He buried the two coins in the dust. For some other little boy to find.

One thought on
“Two Coins for a Flower”