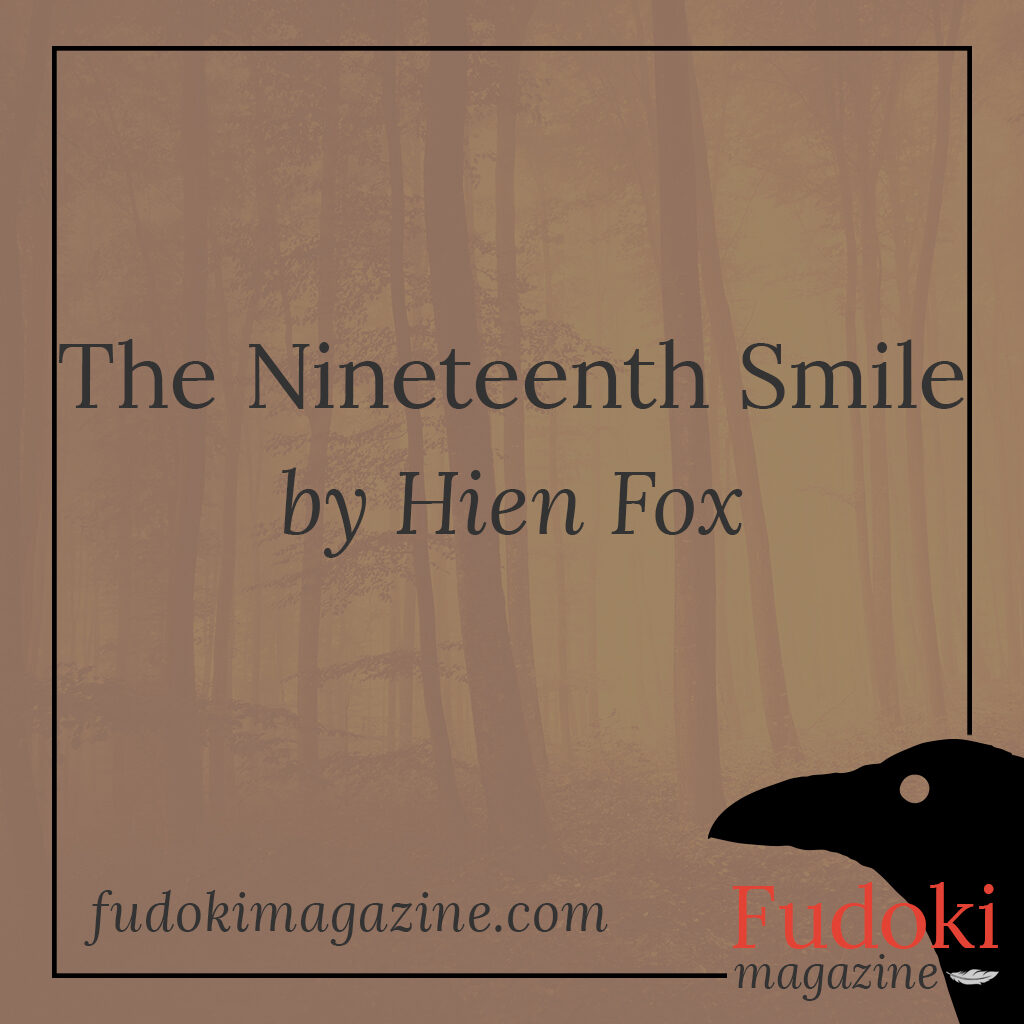 The baby glared, the two half-moons of his mouth puckered indignantly. The midwife inhaled and forced herself to count. Five… four… Babies were adorable, she reminded herself. Three… Two… a deep breath. The midwife tried rattling the bell again, but the boy’s mouth did not budge.

When the midwife had fluttered through the windows earlier that night, she had already taught eighteen babies to smile. Eighteen cherubic grins in one night, the result of the midwife’s devoted instruction. However, this boy still refused to comply.

Every day, the midwife visited. She had witnessed his tiny wrinkled fists transform into plump, rosy fingers. These busy hands sought to snatch everything in sight: fingers, folds of silk, and the midwife’s burnished silver hair.

“Ouch! No, bé, stop,” she squawked, narrowing her eyes. The boy still smelled of plums and perilla. However, that was the limit of his sweetness. The midwife clicked her tongue and pondered what she was doing wrong.

She had watched ten of her younger sisters come in and out of this house, each succeeding after some time. The boy had learned how to suck on his fingers, scream, and roll over. He had mastered all the requisite skills to cause a ruckus, however, he hadn’t smiled, not once. The twelfth and last sister, responsible for teaching babies to laugh, was growing impatient. He couldn’t very well learn to laugh until he first learned to smile.

“Chị, you’re still here?” The fifth sister called out, her cerulean wings catching the moonlight as she fluttered through the window. The dazzling flash of blue never ceased to catch the midwife by surprise. Even by the standards of fairies, her fifth sister was quite striking.

“Yes, em,” the midwife said, crossing her arms and frowning at the boy’s impish eyes. If his stubbornness wasn’t so bothersome, the midwife might otherwise admire his clever gaze. Should she try to startle him? Make a chicken float in the air? No, that might frighten him instead.

“You can’t expect him to smile with a scary face like that!” Her younger sister flitted over and pulled her mouth wide with her fingers. “Bé! Look here! Auntie is funny, yes?” Nothing. His face hadn’t even twitched.

“You don’t think I’ve tried that?” She bristled at her own failure. As the eldest, it was embarrassing. Her sister sighed before suddenly jerking her head upward.

“What’s that?” her sister asked, dropping her hands and squinting into the dark. The shadows in the corridor stretched like long fingers, reaching toward a strange glow at the end of the hall.

“It doesn’t matter, we’re not supposed to be snooping around human homes.”

“Oh, chị, you’ve been here every day for three months! You’re allowed to gratify your nosiness a little.”

“You mean your nosiness, hey-” Before the midwife could finish, her sister was already scampering toward the light.

The baby gurgled as the midwife rushed after her sister. As she inhaled, she detected the dull smokiness of incense wafting in the air. They fluttered past ornate lacquer paintings and billowing silk curtains. She had visited many homes in her lifetime, some grand and some small. Some babies didn’t even have homes to speak of. Here was an enormous house filled with beautiful furnishings. Yet, he still refused to smile. Ridiculous.

The scent of incense grew stronger as the sisters rounded the corner. “Oho, it’s beautiful,” her sister tittered as they entered the room. Polished bamboo walls, silk floor cushions, and a table with an ornately carved mantle. Then, the midwife’s eyes caught the face of a woman: a portrait illuminated by two shimmering jade lamps.

To get a better look, the midwife floated closer. This woman had round cheeks and sharp eyes resembling a hawk’s. The midwife frowned to herself, contemplating why the woman’s shrewd gaze felt so familiar. And, the midwife thought, she looked pitifully young.

“Chị ơi,” her sister’s voice was quiet, “we first started coming here about one hundred days ago, yes?”

“Ah, don’t be so hard on yourself,” her sister murmured. “I have to go, but please don’t stay too late. It will be a problem if the adult humans see us, and you shouldn’t tire yourself so.” Her sister pulled her into a hug before disappearing into the darkness.

The incense had burned nearly to its base, the orange glow fading as smoke drifted into the night air. There were offerings of food on the mantle: fruit and glazed pastries on two ceramic plates, each flanking the woman’s portrait like devoted guards. The midwife’s breath hitched, and a rush of guilt burned in her chest. She had been foolish.

“I’m sorry, but I’ll be borrowing this,” the midwife said to nobody in particular. Taking human objects wasn’t usually permitted, but it would only be for a moment. The portrait floated behind the midwife as she hurried back to the boy’s cradle.

He was cooing to himself, and the midwife could see his tiny fists grabbing at the space where her hair often hovered. “Little chick, I have brought someone you might like to see.” His dark eyes widened as the portrait swooped forward. He babbled and little milk bubbles appeared on his lips, then, silence.

After a long pause and held breath, it finally appeared. Little tawny lips curved into a sheepish grin. The boy giggled and reached out his hands toward the portrait. His laughter filled the room like a kaleidoscope of butterflies. The midwife would have to ask her twelfth sister for forgiveness later.

“Yes, bé. Your mother went to her resting place. You don’t have to mourn any longer,” The boy cooed at the painting in response, the new target of his grabbing fingers. “She would want you to grow up to be a big, merry boy. So, you must do this a lot, okay?”

The midwife waited, with the babbling boy and the hovering portrait, until dawn’s light crept once more.

2 thoughts on
“The Nineteenth Smile”