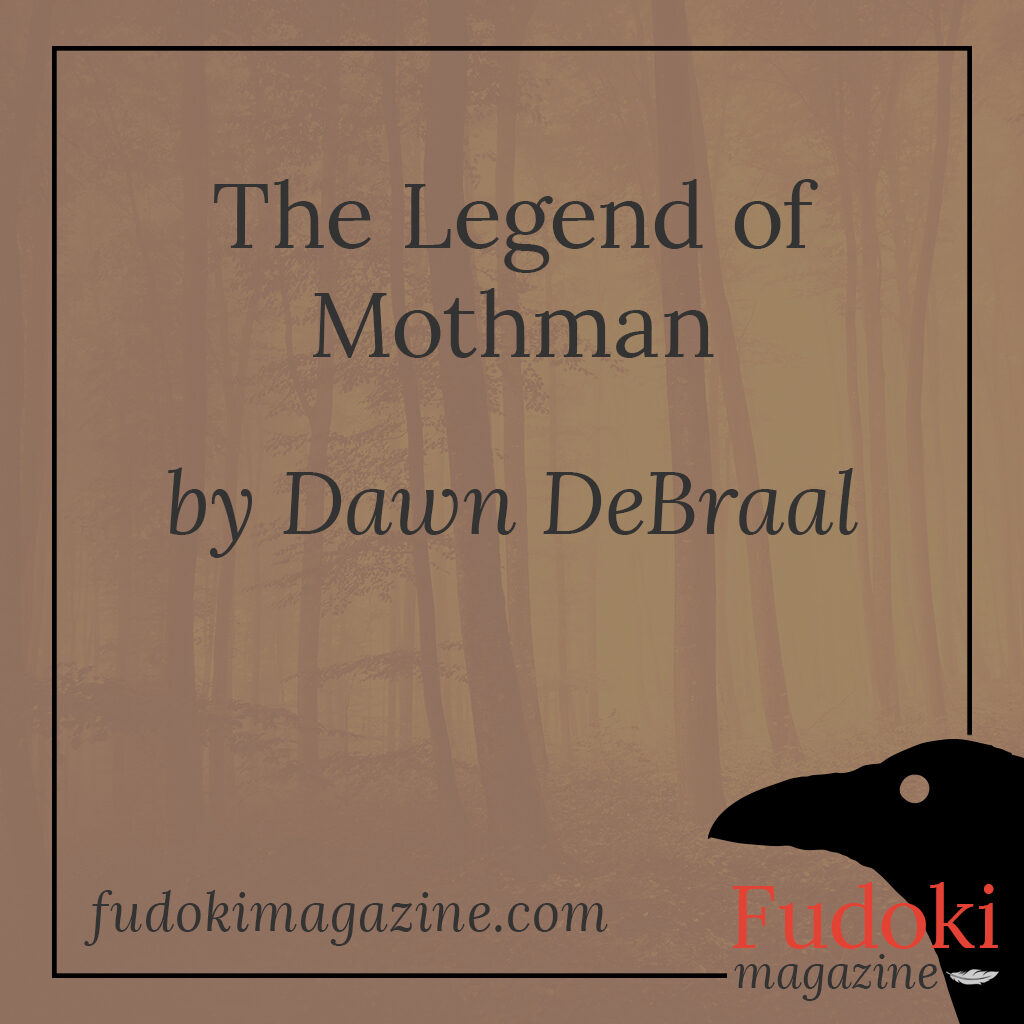 I no longer live in Point Pleasant, West Virginia. And I don’t care ever to see the place again. I still have some relatives there, but I won’t visit them. If I hadn’t seen it with my own eyes, I wouldn’t have believed it—all the talk of what we saw on the bridge before it collapsed. The Mothman is woven into this town’s fabric since the mid-1960s.

December 15, 1967, my pa and I were coming onto the bridge to cross the Ohio River from Gallipolis, Ohio, to get to the West Virginia side. He took me out special to buy my Christmas presents. We had just gotten on the edge of the bridge when we heard a loud crack. I remember my pa and me looking at one another and seeing all the brake lights in front of us. My Pa stepped hard on the brakes. Then we felt a jolt, almost like being hit from behind.

The Silver Bridge crossing the Ohio River collapsed. We would learn that eye number 330 gave way compromising the bridges integrity. Vehicles crossing the bridge fell one after the other into the river, killing 46 people. We were a few cars back from those that dropped into the water below. In all, seventy-five vehicles crashed into the icy water. The entire span of 1420 feet fell in less than a minute. My father said in an eerily calm voice,

“Kevin, get out of the car head for the land!” I didn’t ask twice. I jumped out, ran for the shore behind us that cold night. As we were running, we saw him along with hundreds of other eyewitnesses, all claiming to have seen a man-sized looking bird or moth with big red eyes that appeared around the bridge shortly before and after the collapse. Was he there to warn us?

I will never lose the feeling I had witnessing that event—first, the collapse, which is still etched in my mind. The screaming of people in the river as they drowned is something I will never forget.

When we reached land, this huge thing flew around. Dad knocked me to the ground and put his body on top of mine. I don’t know if he thought the thing would fly away with me or what. He was like a demon from Hell, sent out to pluck the souls from the river. The officials thought we were all in shock, trying to convince us that what we saw was parts from the bridge along with the lights as it collapsed. There was no way that a part of the bridge could fly like that. It wasn’t Point Pleasant’s first experience at the Mothman.

In 1966, one year before the sighting of the elusive apparition, there were reports of its existence out at the abandoned TNT site by hunters. After World War II ended, the TNT site was closed too. It lay empty for years, and the old abandoned plant became an area for hunting rabbits and the like. A group of hunters was stunned when they saw something leap from one tree to another.

“Biggest damn squirrel I’d ever seen,” said Uncle Don. No one believed him because he liked to tip a few. But it was a good story, and we kids loved to hear him tell it. Mother would tell her brother not to swear in front of us.

What I saw that night, on Silver Bridge, was what I think my Uncle Don saw a year before at the TNT plant. They were one in the same. He had described so well, what Pa and I had seen that night. Then there were mysterious visitors of black suited men. It scared me to the point that when I was old enough to move away from Point Pleasant, I did.

Uncle Don and my parents are dead now; there is no one to back my story of what we saw that night the bridge came down. The town went nuts and turned the thing into a legend. They built a Mothman Museum, restaurant, put up a statue and celebrate it with an annual festival. It’s pure tourist dollars for the town. People flock to Point Pleasant looking for the Mothman, out on the TNT site.

A couple of years ago, a building at the TNT site blew up. The whole place is unstable. Why they allow people to search out there is beyond me. I left the area, moving away from Point Pleasant. Those of us who have seen the Mothman don’t ever want to see him again because it is a warning of impending doom. I pray to God that I never see it again.

Recently, I read of a guy who stopped his car on the side of the road, near the old TNT plant. He observed a huge beast jumping from tree to tree. On his cell phone, he got a few blurry pictures. When I opened the newspaper, I knew he’d found it again, the Mothman. My blood ran cold, wondering what new tragedy was about to hit Point Pleasant.