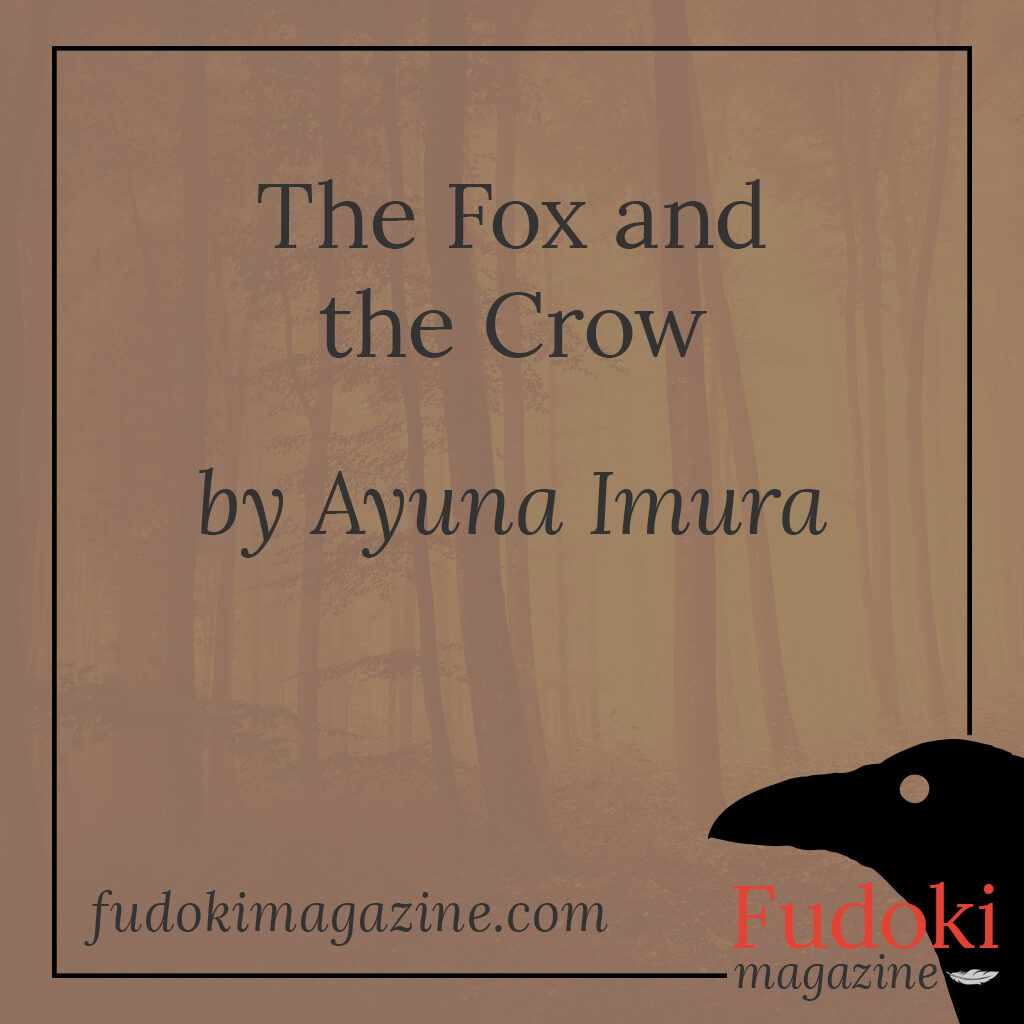 This is a story I heard from my grandmother, who came from a far province in the west during a time when spirits still walked among us.

There was once a young nun of a monastery who went by the name 寒鴉 (kan’a), or Winter Crow. Quiet and composed, she always wore black robes that would match her shiny dark hair framing her face and shoulders, despite it being an age where vivid colours were celebrated.

It was on a winter morning, not even a day after the temple bells rung the new year, that Winter Crow wrapped her travelling bundle with food, medicine and stationery. Word had reached that a friend from her days of apprenticeship had fallen ill, and Winter Crow decided to pay her a visit. It would be a journey of twelve days on foot across two provinces to the east.

Winter Crow tied the knot of her wide-brimmed hat under her chin, took her mountain stick and left after a prayer and a note to the abbess in charge.

The mountain roads were deserted, the snow crisp and glinting on the bare rocks and pine needles, and it suited Winter Crow just fine. She didn’t mind the quiet stillness of winter, the white fog that seemed to swallow up all the sounds around. It let her mind ponder aloud, and she would often put her musings on paper.

On the third day, she found the bridge leading across the valley in tattered ropes, its splintered planks washed upriver along last season’s leaves. She chose to descend the mountain and into the town below.

Far from being a proper town—more of a large village—the place still boasted beautifully carved lion statues at its entrance. The main streets were bright with lanterns and shops open past sundown. Children ran in festive masks playing Foxes and Ravens, neighbours and families exchanged new year’s greetings and gifts of good luck.

Winter Crow melted into the crowds, a quiet shadow passing through the bustling street. If anyone saw and wondered about a young nun in black, they did not comment.

A street dancer was performing as she passed. The bells at the dancer’s ankle and wrists jingled with each jump and pirouette she made, the fans she was juggling glinting in the lantern light. She hollered and yipped in unison to the beat of the drums, eyes crinkled in brazen delight.

For Winter Crow, who preferred plain and simple honesty, the dancer’s glitter and cheek felt unwelcome. As if sensing her unease, the dancer twirled in her direction, clapping and skipping around laughing before Winter Crow stepped away, retreating into the safety of the shadows.

She chose to walk more quiet streets afterwards, glad to leave the beating drums and clapping hands in the lantern light. She stayed at an inn for the evening and the next morning, crossed the valley into the next mountain, where the provincial border was waiting.

Just as she passed the gates, a tap on the shoulder.

The dancer from the night before grinned up at her with a knowing smile.

As it was, she would find the dancer on her travelling road again and again. At resting shelters, crossing points, waterways.

Her name, she told her once while they were having lunch, was 野孤(yako), or Wild Fox, a name Winter Crow found fitting but did not comment on. A wandering performer she was, once a shrine priestess from south of the country, she’d flung her apprenticeship away in exchange for what she called unbounded freedom.

“Why do you keep writing, Crow Lady?” Wild Fox once asked her when she found her noting down a thought before an old, forgotten shrine.

“To capture what I see in words and keep it on paper, lest I forget.”

Wild Fox laughed. “Better to live those moments fully so that you don’t forget them instead of capturing empty moments of nothing.”

Winter Crow closed her journal, tucked it into her sleeve, and moved on.

“Crow Lady, why do you wear black? Our kingdom is brimming with colours and brightness. You should start wearing gold-trimmed greens and reds like me,” Wild Fox said another time and made a show of her over-lapped robes, gathered freely at the waist as if she would need to run or dance from one moment to the next.

Compared to her, Winter Crow’s robes were long and cut simple.

“Black does not lie. There is honesty in the calming grey, the earthen browns. Plainness is humble. You can appreciate many more things when colours are not loud and shouting.”

Wild Fox harrumphed at her words, affronted, but could not say anything in return. She was the first to walk away.

The next time they crossed paths, it was another shelter. Snow was falling thick, but not unusual for mountain weather. Winter Crow decided to have an early meal, while Wild Fox sat in a corner. For once she was quiet.

“Tell me. What made you leave your life as a priestess to live on the road, when you knew you would not always be able to eat?” Winter Crow asked and offered the dancer a rice ball filled with pickled plum. After a third rumble, Wild Fox gave in and accepted the food, having earned no coin on the travelling road this time.

“Adventure. People. Seeing the world with my own eyes. It’s what makes me feel most alive.” Wild Fox grinned despite herself.

Winter Crow finished her rice ball unremarked and made to pick up her brush once more.

“Life can be unexpectedly cruel, Spirited Fox. It will bite you if you look away. Don’t bait the sleeping tiger by nipping at its tail.”

Wild Fox in turn scorned Winter Crow for being a cloistered nun writing endless notes, despite her still being young. By then, the snow had thinned into powder. It was time to move on.

The last time they met, the sky had cleared at the fall of evening. The roads parted; Winter Crow’s friend would be waiting at the foot of the mountain, while Wild Fox wished to go on.

“Where to?” said Winter Crow, almost reluctantly. She had grown fond of the whimsical fox, despite her cheek and yapping cackles, though she would never admit it.

Wild Fox grinned, fangs glinting in the starlight. “West. Over the greater sea. To dance, laugh and see people cheer.”

A nod from Winter Crow, and then she was turning.

“Hey Crow Lady,” said the fox dancer from over the bridge. “Hope one day to read that work of yours. Some of it was quite good, for all its tedious tone.”

For the first time, Winter Crow truly laughed, the laugh she had been biting off all this time finally rippling out. Fool, she called over the snow and trees, while the wandering dancer vanished with a ring of bells.

And in spite of herself, she would afterwards be seen wearing small sashes of green or red, toned just so to match the rest of her robes, but still there.