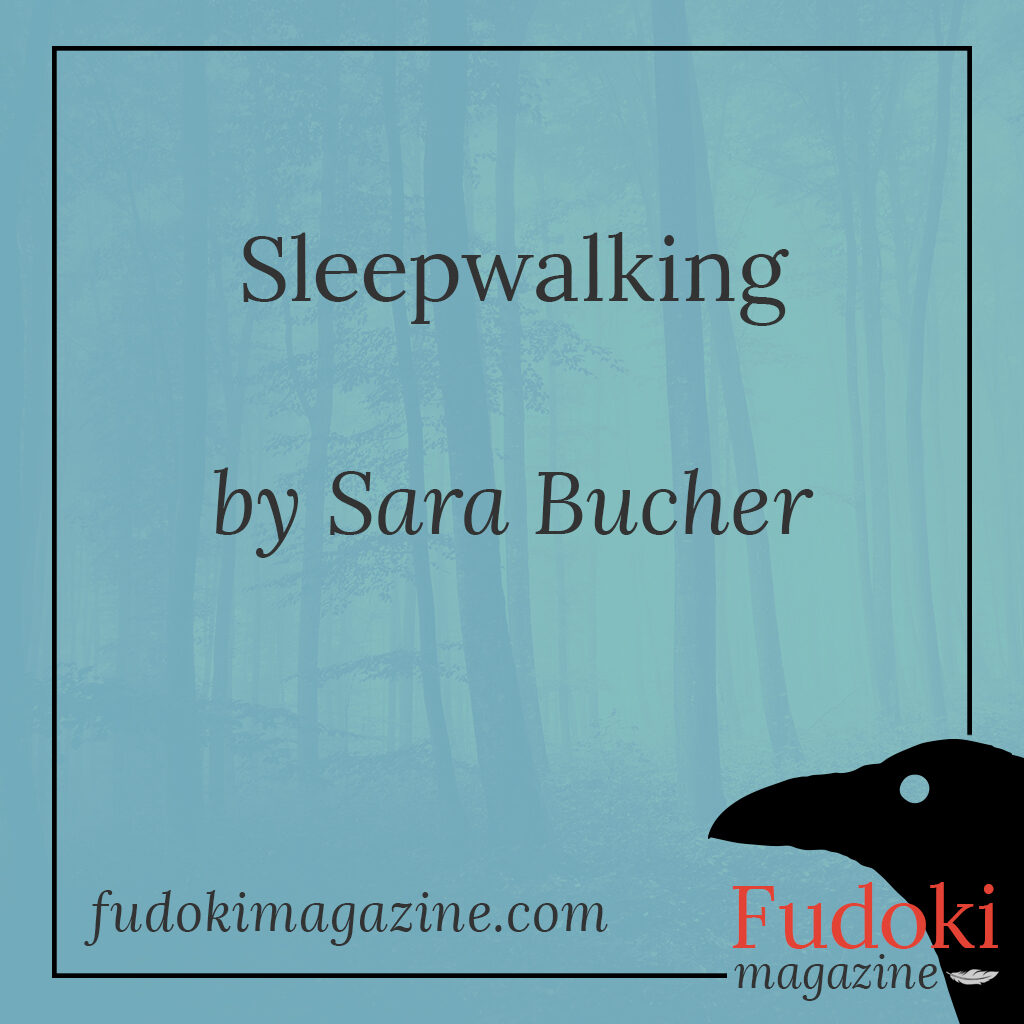 The first time it happens, I find her cowering next to the washing machine, her eyes moving behind her lids. What do you see? I whisper, but there is no answer, so I take her hand and lead her back to bed. She mumbles in the dark. The next morning, she cannot remember anything except for the sound of wings.

The second time, she’s in the garden, about to disappear between the trees. Her hands outstretched, her shirt a flash of white. Back in bed, her teeth chatter so loudly I cannot fall asleep again.

The third time, she holds a bird in her hand, head twisted off like a bottle cap. Just for a moment, I consider leaving her behind. The forest growls like an animal, and I put my arm around her shoulders.

The fourth time, I paint the soles of her feet when she’s asleep, follow her white footsteps all the way to the forest. I find her dancing. There is a smile on her face and no music. She wakes on the way home and starts screaming at the top of her lungs.

The fifth time, I wake up when the sun rises. I look for her everywhere, find her around noon, curled up in the garden shed. There are leaves in her hair and silver dice in her pockets. The seam of her dress is still wet. She doesn’t answer any of my questions, only plays with the dice and stares into the distance.

The sixth time, I get a piece of red string and tie it around her index finger, the other end around her bedpost. So you won’t get lost, I say. When I wake up in the middle of the night, she’s gone. There is a storm outside, howling wind and pelting rain, and I find her drenched to the core up in the old apple tree, spitting seeds into the night, her eyes shining with the premonition of a fever.

In the morning, she’s boiling hot, her matted hair sticking to her forehead. She’s mumbling again. I bring her water and apple slices, put cold washcloths on her forehead and sing her songs I remember from our childhood. Nothing helps. I go to the forest to gather plants, cook them into tea and salves in the big copper pot in the kitchen, feed her with a silver spoon and rub her back with cold hands. She tells me about magpies, and I’m worried she might die.

Only after two weeks does she feel better, good enough to crawl out of bed to lie in a patch of sunlight on the floor. I convince her to take a bath and to put on a clean nightshirt.

Will you, she asks, tie the string around your own finger tonight? So I won’t be lost? Something tells me I shouldn’t, but I do, even tie a double knot. So I won’t be lost, she mumbles again, already half asleep, dreams tangled in her bright red hair. I stay awake for the longest time, tugging on the string, making her hand jitter. She doesn’t wake up.

When I open my eyes, it’s so dark I can barely breathe, the kind of dark that should be silent but, somehow, isn’t: I hear fluttering and chirping and creaking. Footsteps, movement, quiet laughter. Something is tugging on my finger.

Are you there? I whisper and hear her laugh. Where are we?

She doesn’t answer, moves away, tugs me along. Trees are nothing but solid darkness. Was that an owl? Silent steps, swallowed by moss. It feels as if a dozen eyes are watching me.

There is a clearing and a sliver of moon above, thin like an apple slice, and within the clearing there is a pitch-black lake. In its middle, there is an island, and on the island there is a tree, branches like the hands of a starving woman. The lake stares at me and I stare back, and I know, just know, that I will be the first to look away. Glowing mushrooms in the moonlight, ferns are swaying lazily. I don’t want to get closer to the abyss ahead.

She spreads her arms wide, looks like a tree herself.

I’m back. I brought my sister.

The water folds like paper, crumples, spreads again. It does not look the way it should. When I try to untie myself, I realize that I can’t. The knot is so tight it hurts my finger.

Why are we here?

Did you forget? So I won’t be lost.

What does that mean?

I see my own reflection, my eyes wide until they blink. There are merry voices coming from the water, telling stories about the stars that are too frightening to know about.

There is a path. It leads straight to the tree with the grasping branches. I’m afraid that if I stumble, I might disappear forever.

The tree is filled with silent birds that greet her with knowing eyes.

I brought my sister, she says, and slowly unties the knot from around her finger. Steps back into the water. Shakes her head.

Don’t, I want to say, please don’t, but my voice is swallowed by moss and feathers.

So I won’t be lost, she whispers, far away.

The water rises, bites my toes.

Please, I want to say. Don’t leave me.

The seventh time, I wake up to the rumbling of the washing machine. There is a silver coin in my pocket, and I’m freezing to my core.