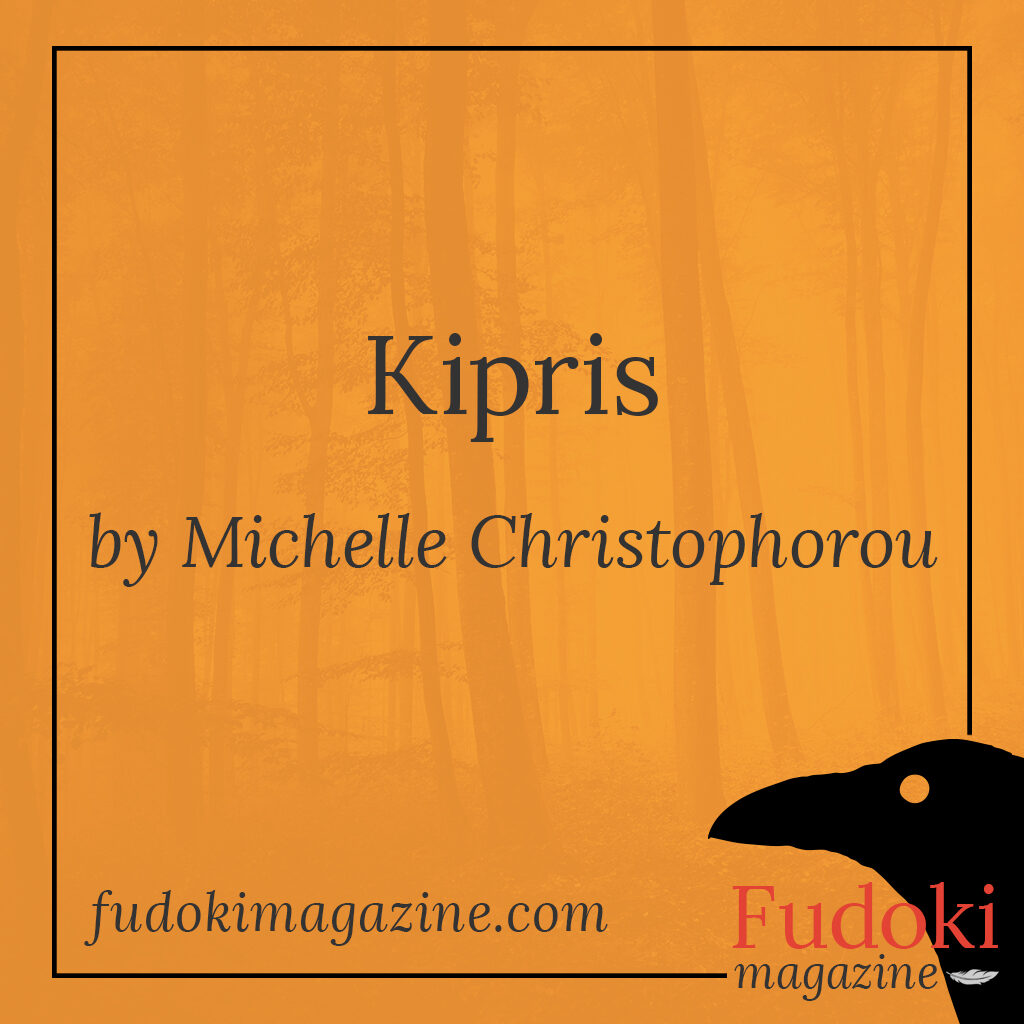 The hope that the October breeze might disperse Anna’s sadness brought her and her husband to Aphrodite’s Rock, birthplace of the goddess. According to legend, if you manage to swim around the more remote formation, you will look forever young. The currents, however, make it a spot notorious for drowning.

But, as with every morning lately, Anna wakes, restless, at dawn. She slips out of the tent, and down to the sea, the bruise of the pebbles under her feet almost pleasurable as she picks her way to the sea stack.

As Anna stands and imagines the pull of the currents claiming her, a figure rises from the foamy surf. It takes on a womanly shape as it walks towards her.

“I am Kipris,” she says, and holds out her hand. Anna takes it, squinting into her face. Her beauty is elemental, terrible but compelling, like gazing at an eclipsed sun. She smells of musk, and freshly dug potatoes.

“Tell me your story,” Kipris says.

So Anna tells of the tug of her ageing womb, the series of miscarriages, until she is raw and soft as a peeled grape.

“I leave you a gift,” says Kipris, “but you must return next year, and bring me one equally as precious.” She disappears into the wine-dark sea.

The gift cries, naked, on a low rock behind her. Anna gathers up the child and presses it to her already lactating breast. The sharp stitch of its lips seals up the hole inside her.

Next autumn, Anna creeps out of the tent and down to the sea. She cannot bear for Kipris to reclaim the child, and can offer her only one thing as precious. Anna walks into the surf, and waits for the current to take her. Mercifully, it comes quickly, cradling her as it pulls her under, before flinging her head against limestone. And then finally, a vague awareness of her body being turned; the slow-motion spiral of water down a drain.

Anna wakes on a bed of pebbles, to the scent of musk and potatoes.

“Many women before you have brought their mortal bodies,” says Kipris, “but none, like yours, was a gift wrapped in love. It is the wrapping that honours me.”

When Anna returns to her husband and child, her skin is soft as an orchid flower.

Story originally published by CafeLit. Now published by Ad Hoc Fiction in the author’s novella-in-flash of the same name.