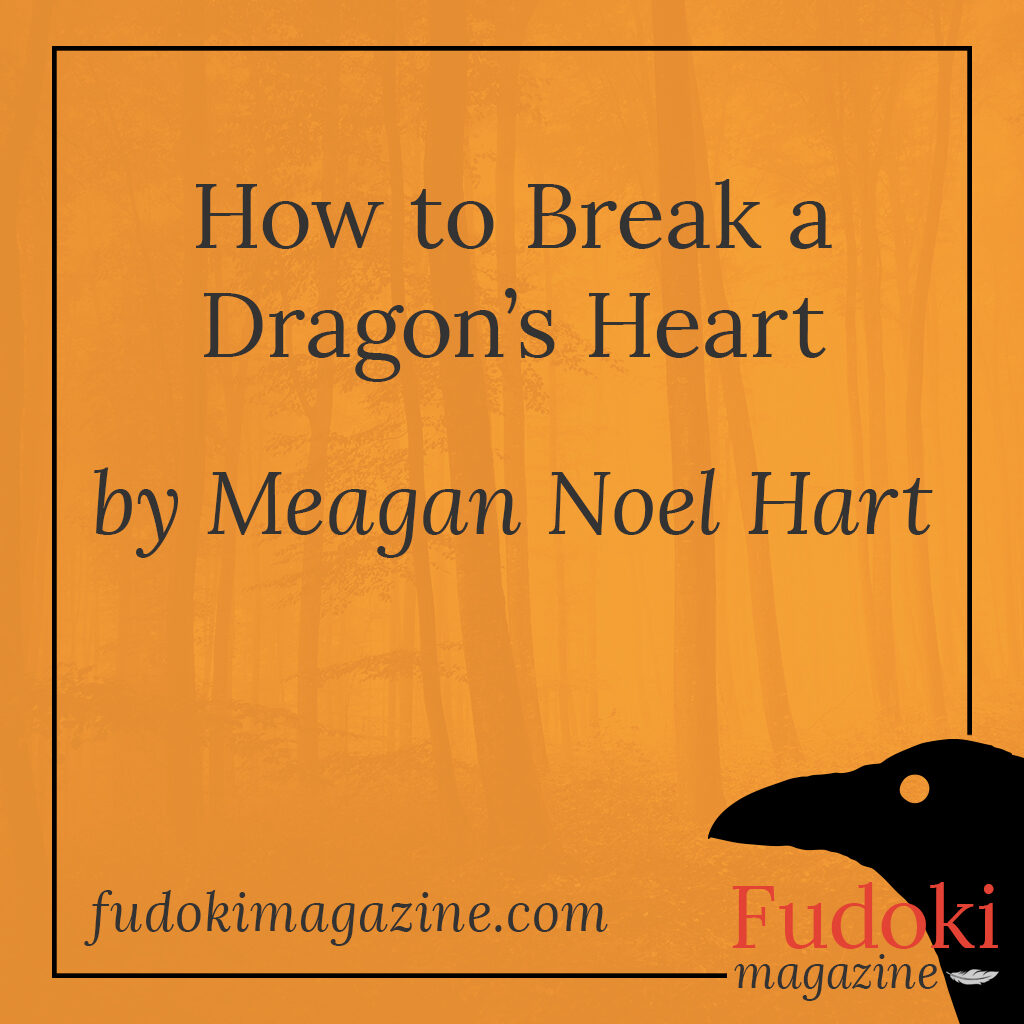 Two dragons twisted through the moonlit clouds, shifting to a graceful dive before tumbling into a field of enormous poppies.

Lillyace covered her snout with her claws. “I sound like a sick horse.”

Serafina’s smile softened. “Have you thought about my proposal?”

Lillyace turned away. “The human world?”

“We could be together there. They even dedicate a whole month to celebrating love like ours.”

“We should fight for our love here.” Lillyace growled.

“They wouldn’t give us the chance.”

“It wouldn’t just be us…” Lillyace snorted. “Besides, the humans protect their side of the border with wizards. They kill trespassers on sight. Treaty approved.”

Serafina scuffed her feet, shaking away the clinging poppy petals. “Look, the diplomats at the brew house talk a lot when drunk. Humans have given their lives to machines. Magic barely exists for them, and dragons are folklore.” Serafina stood. “No one has attempted to cross the border unauthorized in centuries. I doubt humans even guard it anymore, much less with wizards.”

Lillyace stood. “To live there, we’d have to transform, maintaining it always.” She shifted, shrinking down until she stood, naked and human, in the poppies. “Could you love me like this? Could you stand to never fly again?”

Serafina transformed. “If I can’t fly with you, I don’t want to fly.” She placed her awkward human hands on Lilly’s face, and kissed her birthmark.

The Rainbow Wizard was the most popular brewery downtown, adored for its unmatched Pride parties, magical flights of beer, and fierce but lovable proprietor, Sera.

Serafina found running a brewery for humans not much different from running one for dragons, other than the strength of the brew. She had learned to water them down after hospitalizing a few taste-testers.

Transition to human life hadn’t been entirely smooth, but the worth of dragon’s gold ensured a comfortable life. She had everything she had hoped for.

Lillyace had missed the rendezvous. Serafina had waited and waited. She never saw a wizard, nor moved a muscle, yet an alarm had sounded. Dragons responded, clearing the area with fire. She’d stayed hidden only by pressing forward, certain Lilly would come after.

She was still waiting.

Serafina scrubbed away a sticky spot on the bar, scrubbed away for the billionth time the idea that Lilly had been captured or worse… decided not to come.

Laughter erupted from a table of day drinkers, using the afternoon deluge to justify their third flight — The La(r)ger Than Dragons, no less.

A woman entered. Tall, long dark hair. A bit posh for the normal clientele, but what set her apart was her scent. She hadn’t any.

As if by anti-detection spell.

Sera’s heart leaped, just like in the early days whenever a woman would come through her door. No birthmark. Sera snorted away the hope.

The woman strode over, plopping her purse on a stool. “You the owner?”

“Who wants to know?”

“Marta.” She extended her hand. “I’ve heard the Flight of Dragons is amazing, but only the owner serves it.”

She set the flight in front of Marta, and with a wave of her hand, a spectacular blue flame danced above every glass before dissipating.

Marta clapped. “Impressive. But how? Aren’t most of these beers?”

“Family secret.” Sera leaned on the counter, putting her finger to her lips. The truth was dragons didn’t breathe fire, they commanded it. Since humans assumed all magic fancy trickery, this little gesture had boosted sales substantially in the brewery’s fledgling years.

“Which should I try first?”

Marta raised an eyebrow. “How perfect.”

Sera glanced down then tensed. “That’s an unusual purse.”

Marta ran her fingers over the delicate, pale scales that glistened rainbow in the light. A familiar maroon pattern cascaded across one side. “I made it myself.”

Sera clasped her hands lest her claws show.

Marta sipped her drink. “I’ve plans to make another. But, it’s taken some time to track down the material.”

“You should leave.” Serafina’s words rumbled.

“Now!” Sera’s scream shook the brewery. Even the rowdy group in the corner quieted.

Marta leaned in, whispered. “No one breaks the treaty and lives.” Marta stood, swinging the purse over her shoulder as she exited. “I’ll see you soon.”

“Count on it.” The bar burst into blue flame.

Servers rushed in a frenzy to extinguish it, but Sera had already gone.

Sera trudged through the forest, her human form broken, bloody. Tracking a wizard hadn’t been easy, but the taste of Marta’s blood now grew bitter on her tongue. In her hands, she cradled all that was left of Lillyace, now free of the strap and buckle.

The reason Serafina had never encountered any wizards that fateful day was because Lillyace had. Everything made sense now.

Serafina stopped. She inhaled the scent of poppies drifting across the breeze. Their field. This was close enough.

With the hands she’d come accustomed to, she shaped the soil. A diminutive pyre for a dragon.

“From fire we came. As embers we return.”

Sera enkindled a burial flame and soaked the earth with tears.

As the moon sank, Serafina transformed, her wingspan snapping branches. She roared. They would know she was coming, but she didn’t care.

She took to the sky as if she had never left.

Lillyace had been right. The fight was at home.

One thought on
“How to Break a Dragon’s Heart”