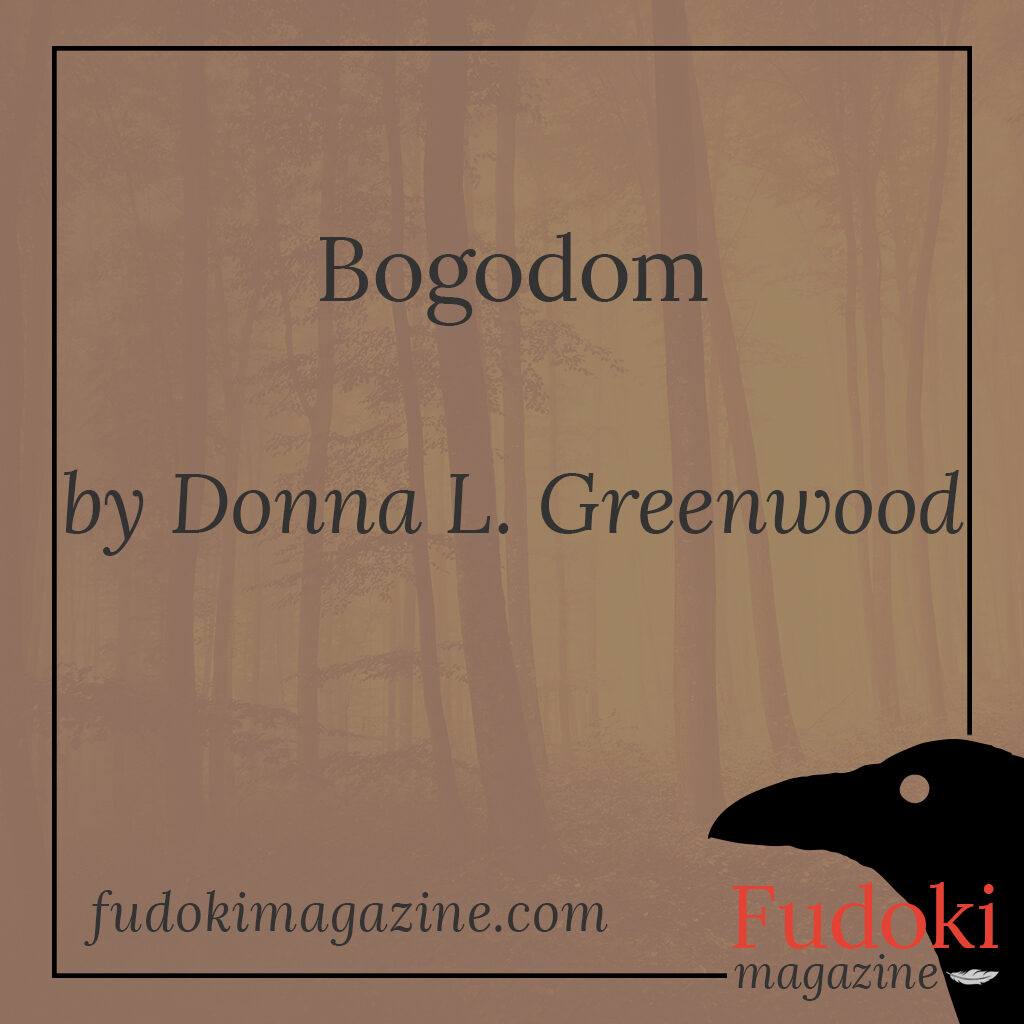 He has plagued the streets of our small town for years. We, the sane and straight-backed, do not leave our homes once the sun has fallen. Moonlight is no light at all when it only illuminates the entrails of the slain. We do not know why Bogodom the Beast terrorises our town, we only know that there are fresh corpses to burn every morning and that Bogodom’s appetite is growing. We hold meetings to discuss how to destroy the abomination,
‘There’s only one of him and there are hundreds of us. We should hunt him down and kill him’.

The speaker is young: he has no experience of monsters, unlike us, the older men and women of the town; we have seen many monsters in our time.

There are rumours that Bogodom was once a witch’s child so hideous that he was hidden in the forest where he grew fat on rage and hatred. Those who have glimpsed him say he is thirty feet tall and ten feet wide. They say he has one giant eye in the centre of his thick, buckled brow, that his skin is filled with pustules and sores and he leaks from holes that gape wide in his leviathan body. He rampages through our town at night, eating our sheep and leaving their bloodied, flesh-empty carcasses in the streets. Sometimes he lights a fire and dances until the moon gives way to the sun. We see his massive shadow twisting and whirling in the half-light.

But Bogodom’s true evil is far worse than a few dead sheep and a maddened dance; Bogodom’s most hideous crime is that he steals our sons and daughters while we sleep. The people of the town have lost nineteen children over the years, although I know that he has taken more. The townsfolk have tried everything to stop him. They barricade their children in their rooms; they stand guard with knives and axes ready to fight for their children’s lives but somehow Bogodom always wins; somehow when they turn on the lights, one more child is gone.

The townsfolk are ignited by the speech of this young lad – Jasper.  They follow him as he marches through the streets, calling for the men of the town to come and join him and behave like men. The men are easily angered and take up any weapon they can find, spears, knives and pitchforks. They march with Jasper as he opens the town’s gates.

‘He sleeps in the caves of Aradon.  Let’s kill him and stop him from feeding on our children.’

Jasper’s cries rally the men and they surge forward as one, ready to bring down Bogodom. Ready to kill the beast.

I follow them, making sure my footfall is gentle so that they are unaware of my presence. I am curious to see Bogodom. It has been many years since I last saw the monster.

The men surround Bogodom’s cave. They are chanting for the beast – Bogodom, Bogodom, Bogodom. Their eyes blaze red with fury and they wave their makeshift weapons in the air.

The ground begins to shake and the beast awakens. From behind the tree where I’m hiding, I see him emerge from his cave. He is huge and towers above the now cowering men. He is how I remember him.

The men recover from their fear and move as one. They climb up Bogodom’s enormous body; they smash their axes into his dark, muscled flesh; they stab their pitchforks into his one giant eye and the beast falls. There is a thunderous crash as he hits the ground, bringing with him the men and their weapons.

All is quiet. The dust settles as the men stare at their quarry. Strange noises emerge from the silence. The men look up. It is the sobbing of children that they hear. From Bogodom’s cave, the children are walking into the light.

‘Bogodom, oh Bogodom,’ they cry and run to the giant. The children burrow into the warm slips and folds of his skin, their tears wash away the dirt from his mammoth body.

Some of the men recognise their children. They try to pull them away from the fallen beast but the children cling to Bogodom, not wanting to be parted from their friend.

I walk towards the body of the monster, remembering the night when he came for me: the night when my father was whipping me with a belt to make sure I kept my mouth shut; the night when Bogodom reached his hand through the window and grabbed me, pulling me away from my father and the years of abuse.

I bend down and trace my finger along the sad, ruined face of my saviour. I lie down beside him and pray that he will awaken.  I whisper into his gigantic ear,

‘Don’t die, Bogodom, the little ones need you.’

The children join me then. Each child finding a space to lie on or next to Bogodom. We cover his body with our own; we use our skin and bones to protect our monster’s flesh until the men drop their weapons and fall to their knees. They look at their blood-covered hands, at one another’s hate-filled faces and see there are more monsters on this earth than they will ever be able to defeat.