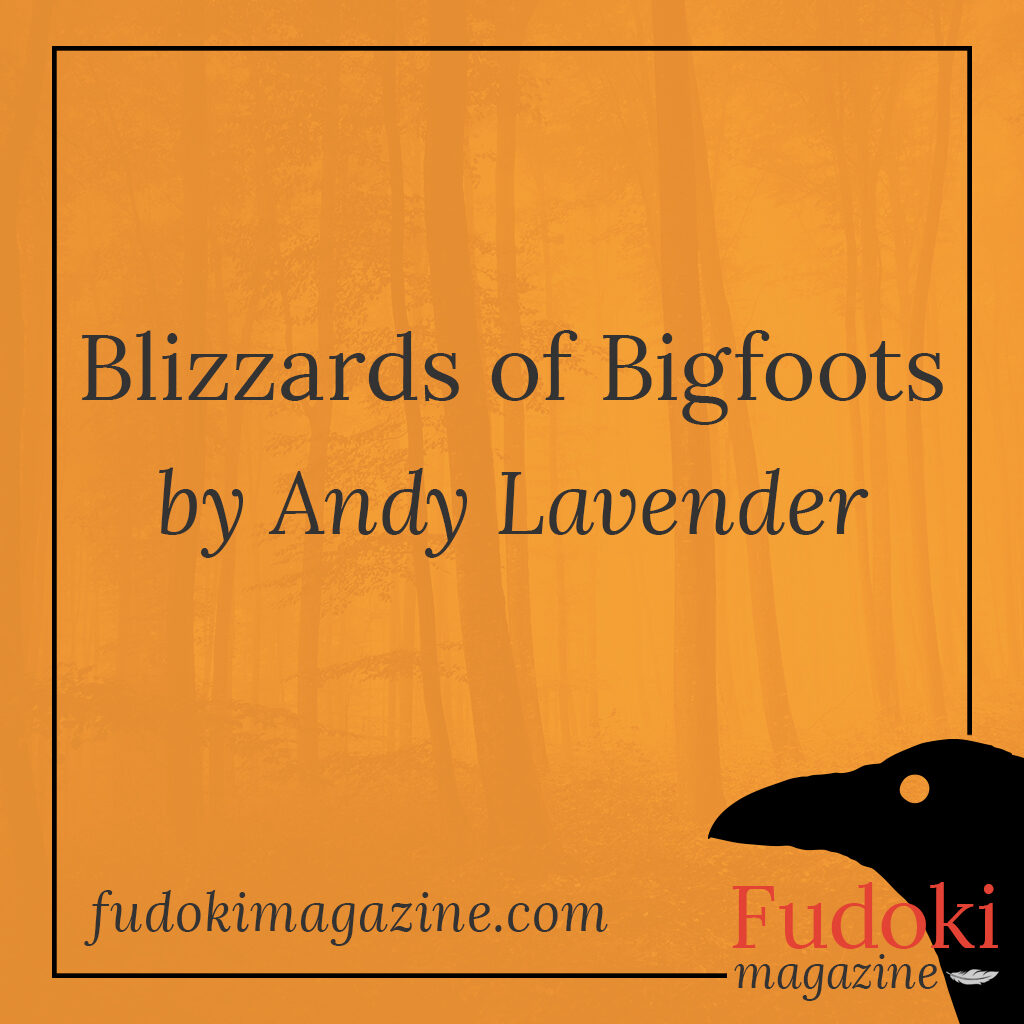 Winter started early that year. First snowfall at the end of October, and by Thanksgiving it was over two metres deep. The town was cut-off, and we hunkered down for Christmas with most folks spending the darkest days watching the inside of their walls. March 8th was the first day without frost and people began digging themselves out of their homes.

The first Bigfoot sighting came that weekend from Old Buzz, who said he’d seen one on the ridge just after sundown: not that anyone believed him. They thought Old Buzz had been drinking more than usual. Then, like when you see the first salt and pepper flower of spring and think it’s exciting yet the next day they are sprinkled everywhere, so it was with the Bigfoot stories. Within a week everyone in town had glimpsed one running through the trees, seen their breath in the cold air, or found claw marks in discarded Papa John’s boxes.

The experts arrived before Easter and said that with the hard winter; the Bigfoots had expanded their territory as we’d stayed indoors. They’d hiked our paths, slept in our campsites, and crept into the edge of town. People got scared. The snow was bad enough, but a blizzard of Bigfoots was something else.

The Mayor gathered a posse under a law from 1827 that had never been repealed. The local University used machine learning to define the best search pattern – a randomised spiralling kernel polygon approach would drive all the Bigfoots into the quarry.

Local hunting shops ensured the searchers had waterproofs, night-vision glasses and thermal scanners. The garage checked all the four-by-fours were running smoothly and leaders of all faiths blessed the group as it headed out.

The head of each search team wore a webcam, and we gathered to watch for a sighting. An enormous cheer went up when they cleared the first polygon. The cameras found only empty caves, no droppings, no half-eaten animals. There were cheers for second and third polygons too. Here they found no broken tree branches, no disturbed ground, no tracks of any kind. At the tenth, only the children were cheering. By the fifteenth, we all knew what we’d find at the quarry.

It was a relief when the searchers completed the twenty-fifth and last polygon. Everyone gathered around the quarry like the Indians in an old Western movie. It was empty. After a few minutes, Jessie’s boy, Billy, spoke up.

“How come we didn’t see any animals at all on any of the pictures?”

We realised that Bigfoots had outsmarted us all.