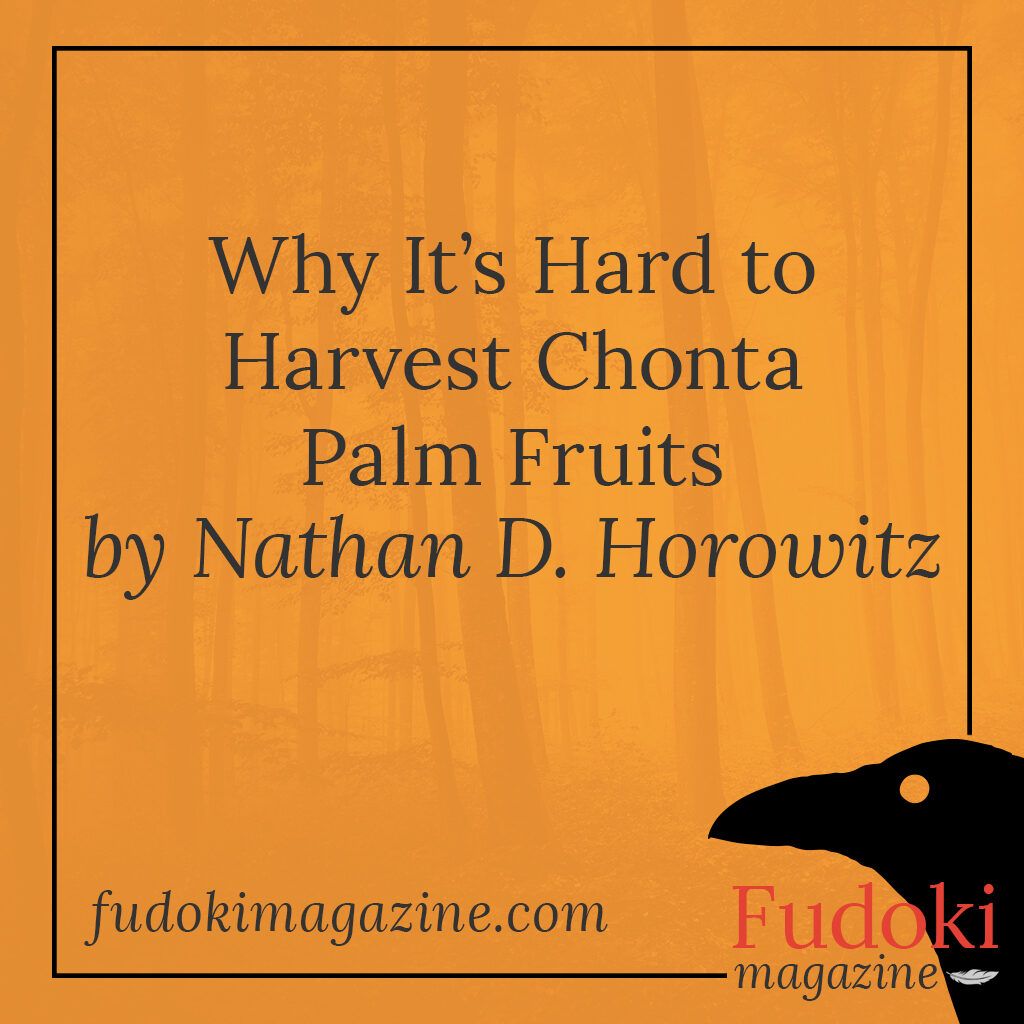 A Siekopai Myth from Ecuador

This happened when God, Nyanyuh, was living on Earth. He had a wife named Umewá. Umewá cooked dinner for them both, little wild plantains baked on the embers of the fire. They reclined in their hammocks as they ate. Hers was hanging directly above his. He smelled something better than plantain.

“Are you eating something that you’re not sharing with me?” he asked.

But he thought she wasn’t telling the truth. “Maybe a bit of what she’s eating could fall,” he thought. And because he’s Nyanyuh, it did. He caught it and stuck it in his anus.

Umewá said, “Did I just drop something?”

“No,” Nyanyuh said. His wife climbed down and searched him all over with her fingers, including his mouth, his ears, and even his nose, but she didn’t find what she had dropped. She figured it had fallen on the ground and rolled away somewhere, so she gave up and went to sleep. Nyanyuh took the little object out and wrapped it in a leaf and stuck it in the edge of the palm-thatched roof. Then he went to sleep, too.

In the morning, he took the wrapped object and brought it down to the river. He scrubbed it carefully with water and sand. It was something he had never seen before: a kernel of corn. Slowly, he ate it. Delicious! But where had she gotten it from?

“I’m going hunting,” he told his wife when he was back at the hut. He picked up his blowgun and dart quiver and headed off down a hunting trail. Then he turned around and crept stealthily back to the hut. Peering in, he saw Umewá turn into a frog and push aside a leaf that lay on the dirt floor. Under the leaf was a hole. The frog vanished down it.

Nyanyuh went inside. He saw that the hole led to the Underworld, where his wife was from, and where her father was in charge. Nyanyuh turned into a scarlet macaw and flew down the hole, emerging into the Underworld’s sky. Below him stretched a huge garden of corn plants. Alongside the corn plants grew chonta palm trees laden with ripe fruits. These chonta palms grew only as tall as the corn plants, making it easy to harvest their fruits.

Nyanyuh started flying from place to place gathering up ears of corn and bunches of chonta fruits in his claws. His father-in-law saw the big red bird robbing him and started chasing him around, shooting at him with a blowgun. But, for some reason, he never managed to hit him, and finally Nyanyuh flew up and vanished in a blur of red feathers through the hole in the sky of the Underworld.

When Umewá came back up through the hole later, she found her husband separating corn and chonta fruits into piles to eat and piles to plant.

“That scarlet macaw was you!” she said.

The next day, he went out to a clearing near the house and started planting the corn and chonta. As he worked, a frog approached and sat there glaring at him.

“What do you want?” he asked, but the frog didn’t reply, and after asking again, and again receiving no reply, Nyanyuh took a stick and killed the frog. Finishing his work, he went home.

“Did my dad show up?” Umewá asked.

“Really?” she said, narrowing her eyes. “He said he was going to go see you.”

“No, nothing came to see me except a frog, and it just glared at me, so I beat it to death.”

“You maniac, that was my father!”

“Don’t worry, I’ll fix him.” So Nyanyuh went out to the frog and brought it back to life. It turned into his father-in-law.

Not speaking, the two men walked back to the hut. There, before returning to the Underworld, Umewá’s father cursed the chonta palms Nyanyuh had planted, so that they would grow to a great height. And that is why it is hard to harvest chonta fruits today.