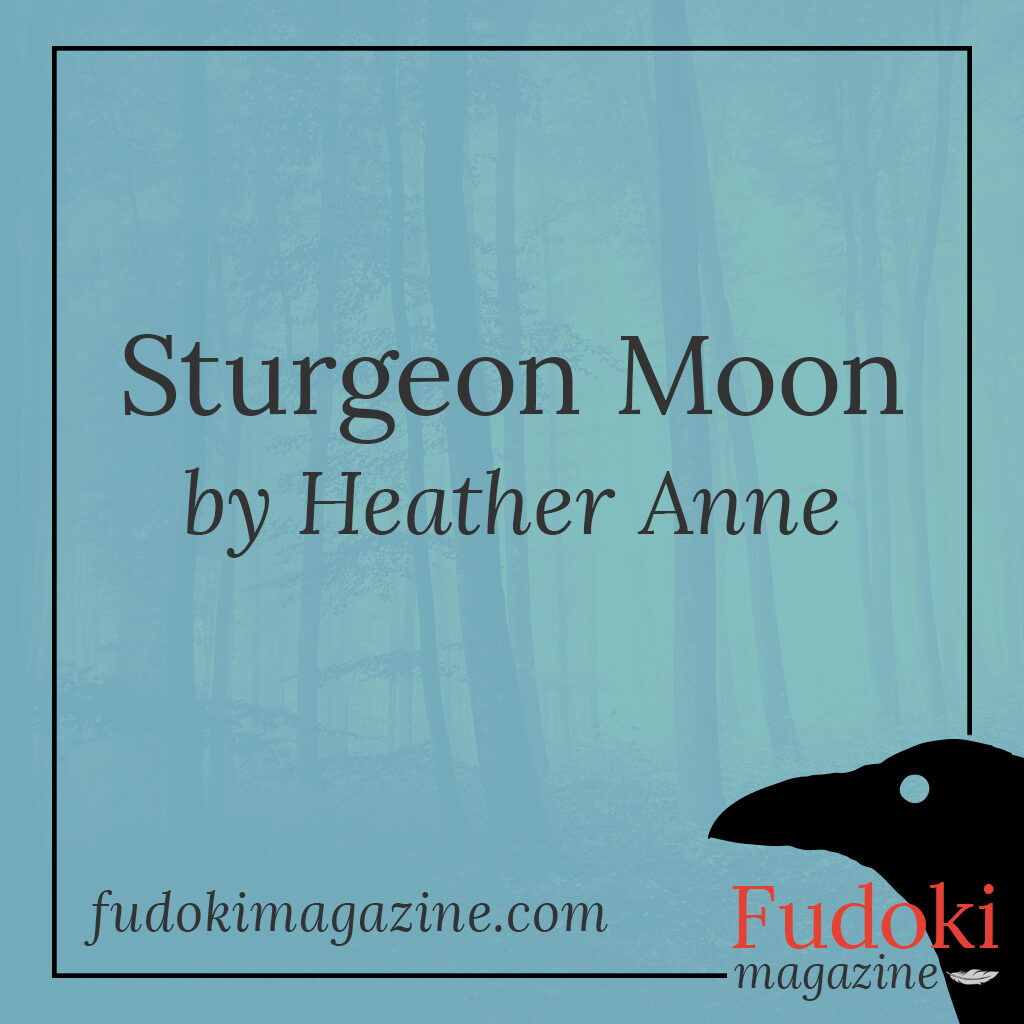 Once there was a woman so haunted by the grief of losing her child that she decided to seek out the memaeri. She’d heard the creature was both woman and man, both human and animal, both gruesome and beautiful, dangerous and gentle. It was said that if you go into the deepest, darkest part of the forest the night of a full moon, the memaeri will find you, and it will grant you what you most desire. In return, you must give it your most precious item.

The grieving woman went to the forest on the pink moon. She walked until it was dark enough that she couldn’t see her own hand in front of her. Then, she stopped and knelt on the forest floor, which was damp and cool beneath her knees. She laid the item she had brought on the ground in front of her. It was her baby’s blanket, the one she’d swaddled her in the day she was born.

The woman felt entirely alone in that dark forest, waiting there for the memaeri. Not a single creature uttered a sound. But soon, she felt a warm breeze wrap around her. She could feel something nearby. She knew immediately it was the memaeri, even before she saw two glittering eyes appear. They twinkled like cosmic galaxies.

The warm breeze swept through the trees again, this time parting the branches so the moonlight could reach the forest floor. She could hear the memaeri’s whispered words in the wind, telling her, Do not be afraid. She wasn’t afraid — not even when its inhuman face and tremendous body was illuminated by the pink moon.

You are here for your child. Its voice glissaded through her head.

“Yes,” she said. “I lost her to sickness. My grief is immense. I cannot live any longer without her.”

The memaeri took the blanket and brought it to its luminous eyes, surveying it carefully.

Your offering is worthy, it said, I will help you.

“Please bring my baby back to me,” the woman said, though she knew the memaeri would only help her how it wished.

It placed the blanket between them, then put its hands on top of hers. The wind began sweeping feverishly around them. The heat from the memaeri’s hands seeped up her arms and into her chest. Her mind suddenly filled with the sight of her baby — her bright eyes and tiny toes and rosy cheeks.

When the memaeri let go, the woman collapsed to the ground limply. Her eyes were closed softly and her chest rose and fell gently, deep in sleep. The memaeri bent only to pick up the blanket, then vanished.

How the story truly ended differed depending on who told it.

In the version Rebecca knew, the memaeri had put the woman into a deep sleep that she’d never wake from, so that she might be with her baby in her dreams forever.

But there were many other versions, ones which painted the memaeri as malicious and deceitful. In one version the woman withered away and died in her sleep. In another, the memaeri ate her body piece by piece, until there was nothing more of her left. Or, worst of all, was the one where the woman awoke deep in the forest wrapped in the baby’s blanket all alone, where she eventually died of grief.

Rebecca had never understood how grief could become so immense it drove you deep into the woods. But when she lost Theodore, she thought immediately about the woman. She, too, was so haunted by her grief that she decided to seek out the memaeri. She didn’t care what ending the story might have.

She went to the forest on the sturgeon moon. She was miles deep in the woods before darkness finally closed in around her. When she could no longer see her hand before her, she knelt to the ground and listened. Not another creature uttered a sound. She was all alone.

The night was warm, but her skin pimpled when a warm breeze grazed across her as it swept through the forest. She held her breath deep in her chest, heart fluttering. Just as the story said, she could feel the memaeri’s presence before she saw its glittering galaxy eyes hovering before her.

Do not be afraid, the memaeri’s voice whispered in her head, the branches above her parting in the wind. She was not afraid. She was mesmerised by it.

You are here for your child.

“Yes,” she said. “I lost him—but it wasn’t his fault. My grief is immense. I cannot live any longer without him.”

She placed on the ground before her the plush bear she’d bought for Theodore just hours before he was born. The memaeri took it and brought it to its iridescent eyes, surveying it carefully. Rebecca looked at the long digits that held it, but couldn’t be sure if they were fingers, or feathers, or claws — or if her eyes were just playing tricks on her.

She waited for what felt like an eternity as the memaeri observed the toy. It was so quiet she could hear her pounding heart.

Your offering is worthy, it said. I will help you.

“Please bring my baby back to me,” Rebecca said, though she knew she had no sway of the memaeri’s decision.

The memaeri placed the toy between them, then put its hands on top of hers. The warm wind swept around them, frenetic and intoxicating. Leaves and twigs caught in its current became tangled themselves in her hair. The memaeri’s touch was hot, just as they’d said, and the warmth of its hands seeped up her arms and into her chest.

At last, her mind filled with the sight of her darling Theodore — his bright eyes and tiny toes and rosy cheeks. Then the memaeri let go.