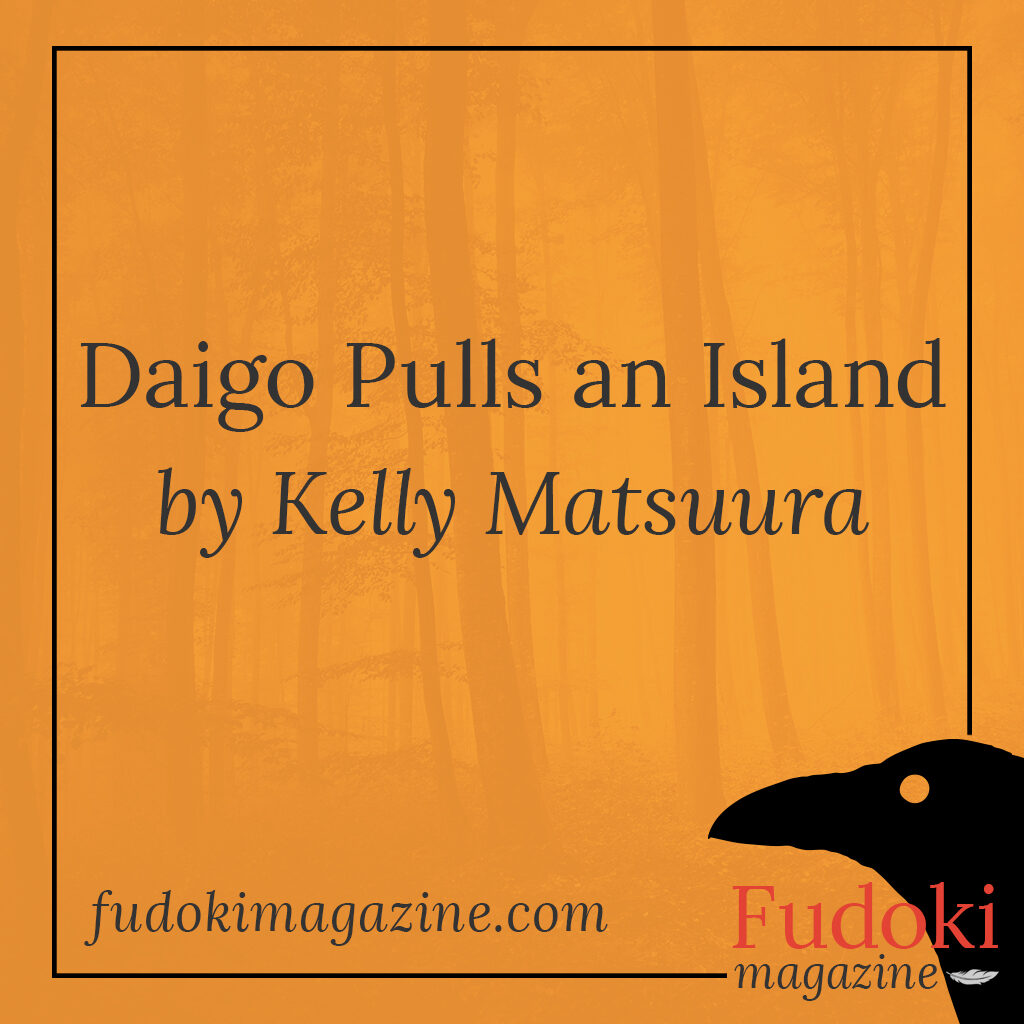 Daigo lived in Japan in a time before cities and industry and technology. He was not a king, but a descendant of one and a distant cousin of Amaterasu, the Sun Goddess. He was a rare demi-god on Earth, so placed there due to his enormous size—being ten times larger than any other god or being in the heavens he just caused too much commotion.

He lived a solitary life but was not unhappy. The land he had claimed as his territory was lush and mountainous, with snow and freezing temperatures far north, and delightful sun and heat in the islands of the south. He enjoyed walking up and down his land in different seasons, but most of the year lived roughly in the center, where he slept next to a giant volcano. It rarely erupted, but he enjoyed its quiet rumblings and make him feel less alone.

There were few humans around, mostly nomadic tribes that crossed the land bridges from far west and settled for short periods of time along the eastern coast.

The first time that humans appeared, Daigo caught and ate a couple, but he did not enjoy the taste. He much preferred the darker, flavorful meat of the local elephants, and the mammoths that crossed the western plains each spring through until late fall.

And so, as the years passed, Daigo left the humans alone and avoided stepping on their seaside villages.

Then one winter, Daigo fell asleep. Now usually he might sleep a full moon cycle, maybe two, but this time when he awoke the trees were heavy with red and gold leaves and the fall winds were beginning to turn back. He had slept 10 full cycles!

In shock, and also hungry, he began to walk. He first headed west, to an area he’d likely find an elephant colony to feed on. He took a familiar pathway but soon found confusing changes: a pine forest he had used as a resting place had somehow recovered and each tree stood tall and healthy, and a lake Daigo had made centuries ago was no completely dry.

And no elephant colonies in sight.

Puzzled, he walked towards the west coast to check on the human settlements there. To his surprise, there were humans milling about: some were dragging fallen trees, some were constructing more elaborate shelters than Daigo had ever seen, and others were building odd-shaped—what were they building? He really had no idea.

When he looked out to sea, he had the answer. The humans were out on the water in some kind of wooden vessel they had successfully developed. At first, he smiled, happy for their accomplishment.

He soon saddened, realizing two things; one, he had slept for a long, long time and two, while he slept, the humans had evolved and taken over more of his territory. And another problem, winter was coming again soon—he needed to eat well then sleep again until the weather warmed. But what if he didn’t wake up next spring?

With a heavy mind and a rumbling belly, Daigo headed north. He had to find a herd of elephants or even better the mammoths, if the timing was right, there would still be some crossing the plains now.

Daigo walked far, far, north and then turned west. He didn’t usually go out this far because it was flood-risk area. Some seasons the land bridge was completely under water and the mammoths didn’t come at all.

This season, he felt it necessary to cross himself and find food.

Thinking about the floods gave Daigo an idea. Could he in fact, flood this area permanently? The mammoths would no longer be able to cross here, but neither could more humans. Daigo felt it was more important to protect his territory from invaders than it was to eat mammoths. There would still be some mammoth herds trapped on his land, and well as numerous elephant colonies, and he could always expand his diet to bears, deer, and if absolutely necessary, a few bland humans to fill him up.

If he protected his territory now, it then wouldn’t matter at all how long he slept. He was getting up there in years and entitled to sleep if he wanted to. Despite still being hungry, he felt quite refreshed just now. Sleep really was top priority to his survival.

Mind made up; it took Daigo a full daylight cycle to find food. Three lone elephants drinking at a waterfall hit the spot, then he set to work weaving a long rope.

To flood the land bridge permanently, he had figured out that all he needed to do was move one of the islands in the distance closer. It would act as a stopper for the seawaters current pathway and divert it to the land bridge.

Plus, the island had some interesting tree species growing on it that Daigo was curious about. He would pull it over and go investigate what treasures it may hold.

He spent many days weaving the rope, finally it was ready. He tied a big loop in one end and cast it high in the air, catching on the island first try. He pulled and pulled, using all his strength, and after a full day’s labor, the island stopped as close to Daigo’s land as possible, leaving a small sea channel between it, but not too wide for Daigo to jump across.

He found his new piece of land uninhabited by humans or large mammals, but it was a lovely quiet place with a perfect-sized pine forest for him to make a bed on.

Exhausted from moving the island, Daigo soon dozed off. His last thoughts were of the future.

He hoped to wake up and find things just as they were, no matter how many seasons he missed.