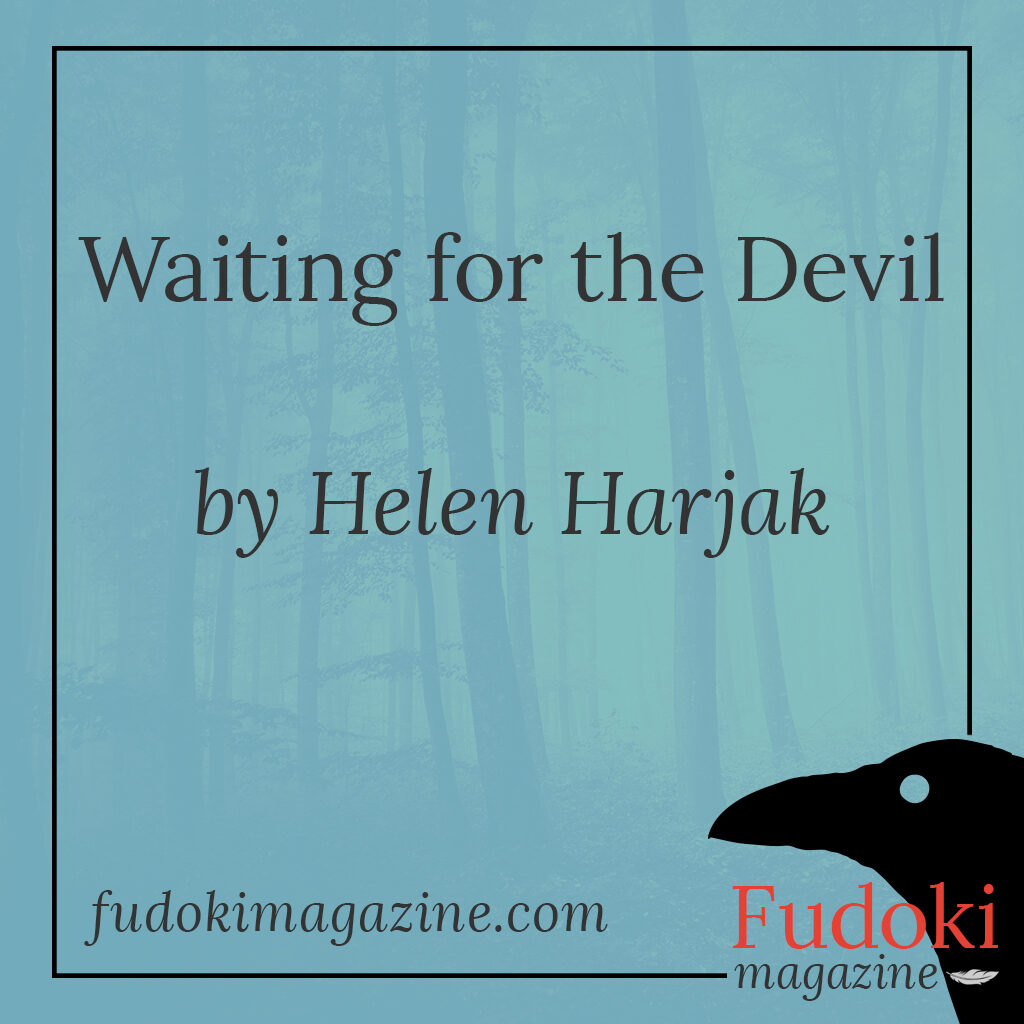 Years from now, when you’re sitting by the fire after a long day’s work or lie tucked under a blanket as the nightlight casts shadows on the wall, you’ll hear a version of this story. Once upon a time, a poor maiden, who was always the last to use the sauna belonging to the family she worked for, heard a knock on the door while she was washing herself. It was a servant of the Devil in an impressive carriage, inviting her for a ride. The maiden pondered how to get out of this pickle and finally said she had nothing to wear. The servant ran off and returned with a shirt made of the softest linen. Again, the maiden assessed the situation and said she had no skirt to go with the shirt. Again, the servant obliged. This went on all night and the maiden gathered a pile of fine clothing. Then, the cockerel crowed, and the servant and the carriage disappeared back to Hell. Now, the maiden was free to go around in all that finery. When the daughter of the family the maiden worked for saw her new outfit, she asked the maiden how she came about it. The maiden told her, and the following Saturday night the other woman made sure she was the last one at the sauna. When the Devil’s servant showed up, she listed all the finery she’d seen the maiden wear. Once it was delivered, she got dressed, stepped out of the sauna, and climbed into the carriage that took her straight to Hell.

Now, while you’re shaking your head and contemplating the pitfalls of greed, let me tell you that this version will be mostly recalled by those who mistake poverty for virtue and ambition for vice. The truth – as is often the case – will be more complicated.

As I beat my back with the whisk, fragments of leaves stick to my pale body. I smell their green-grassy freshness and pour cold water over myself. I scrub my skin so hard red marks appear all over. I want to be ready for him. They’ll all think I’m doing this for the fine leather slippers and embroidered clothes. I made that dull wench think I envied her hoard. She has no idea what she missed out on. Does she really think that finery is enough? Will it make her more virtuous than everyone already thinks she is? It’s easy to be kind when you have nothing to give. As for me, it’s high time I leave before Father starts talking about me marrying that old fart Pelk again. Maybe now he can offer up his servant girl?

I’m in the process of untangling my hair when the Devil’s servant knocks on the door. He speaks in rhymes and riddles as if casting a spell. Yet, there is no spell left to devise because I’ve already cast mine. You could say I’m the one who let the Devil know where the young women of our village live. If I’d known when his lackey would show up, it would have saved a whole lot of rumours to come. But let them wag their tongues and spin a yarn if it makes their own burdens easier to bear. I tell the Devil’s servant I have nothing to wear and list the items I need. He runs off to fetch them. I finish brushing my hair and wonder what Hell will be like.

I think it will be warm, like Marbella in July, and smell of the forest on a quiet sunny afternoon when the resin oozes down the flaky tree trunks. Perhaps the fires will be a bit more pungent, reminiscent of the sharp scent of old leaves burning in early spring, or more sulphurous, like hot springs. I expect the Devil to be hairier than the men I’m used to and his hair to shine auburn in the glimmer of the small fires blazing all around us. He will have a deep, gruff voice and a quick temper – but also an irrational fear that only I will know about and that will bring us closer, such as a phobia of buttons or ladybirds. The walls of our house will be covered in silky hides, and every room will have black lacquer furniture and a bubbling red wine fountain. I will have a personal assistant who is also a qualified spin instructor and acupuncturist. Our diet will consist entirely of meat, but it would be prepared in various ways to create the illusion that we’re still eating bread and fruit.

My Devil husband and I would grow old together and never have children, because if we did, we’d end up eating them. We would lie side by side at night and whisper verses from the Bible backwards at each other. Sometimes when we’d be in a particularly good mood, we’d let all of Hell spin round and round. His kisses would taste of liquorish as he winds a lock of my hair around his finger and says he has never seen eyes as fierce as mine.

The carriage is back. I hear the horses’ neighing. The servant knocks on the door. I open it swiftly and grab the clothes. In the reflection of the round silver brooch, I admire the glow of my cheeks. I dress with haste and open the door to my future.