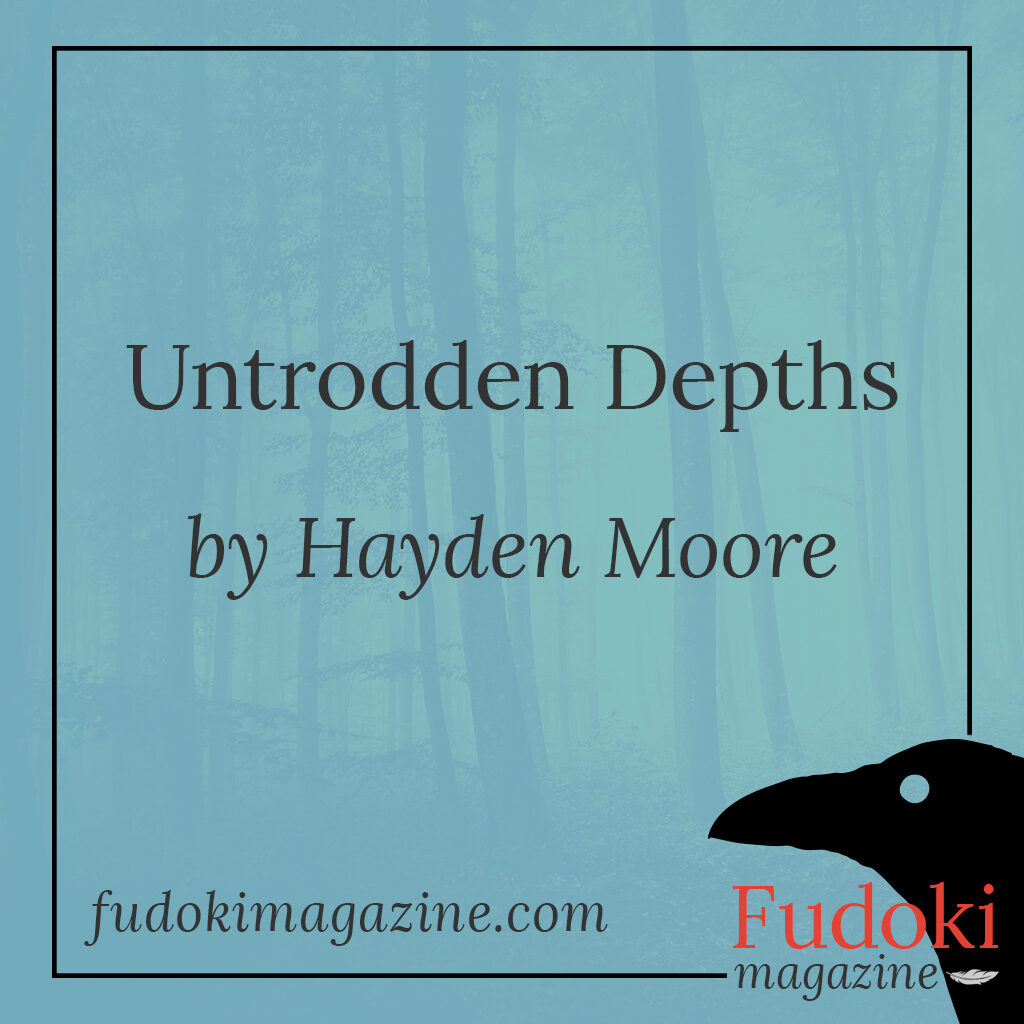 ‘Whoever cannot seek the unforeseen sees nothing, for the known way is an impasse’

Big and small found their masterpieces in the forest’s secret depths, the ageless lichen latching onto the ancient oak as surely as the oak embraced the ground. Mayflies lived forever in a day while eagles looked down on the forest with a knowing beyond their sharp eyes and ruthless talons. The glory of iron wars never found the wood and the stones and the waters of this timeless place. It was a double power of rousing and routing intertwined into a balance of growth and decay, praying and predation. As the girl ran across the muted dark earth, she was neither fleeing nor seeking, she was simply being as everything else in the woods of Parnassus. Nothing was big or small when everything reached towards the other, without beginning or end, from the gnarled bark of the oak to the flushed flesh of Daphne. Even the filtered light of evening was subject to the everything of the forest, the everything that transformed it into just another part of the One.

A careless string of twine held her tangled hair behind her shoulders, a nod to a bit of order in the chaos of Daphne’s ways. Her bare feet wore callouses and the little things of the forest told her where the water flowed and which way was the opposite of the other.

Her father had called her aloof while her mother deemed her something else. But solitude had spared her the tragedy of wasting away as just another bit of the collective. When almost everyone depended on the other, nobody but her was left to call herself a recluse. The arrows of love and plague had never found Daphne, not for lack of sharpness, but for the absence of a target.

In the midst of the outbreak back in town—a year ago seeming like a thousand and one—Daphne watched from a distance as one house went dark, followed by two, then seven. She reread the classics she loved and carelessly failed the tests her parents fetched from the mailbox every week. Numbers revealed themselves for the meaningless abstractions they were while her political science book became fodder for the fire in the last winter of the town of Parnassus. Canned beans were elevated to fine dining while every rumbling at the door was either a masked figure of death or just another looter mistaking her home for the one next door. Her parents told her to be patient. But one morning, just as she was prone to do, Daphne walked out the door and ran into the woods.

The forest of Parnassus followed the seasons just as buildings tried to keep them out. But to say time moved slower in this sylvan realm was false, it was another dimension of time altogether. Daphne stopped running and knelt by a small glade of ferns. She caught her breath the only way she knew how to.

’In shady woods of Parnassus flowers,
It donned two arrows of opposing powers,
One was blunted and the other sharp,
Gold and lead both meant to warp,
Both were struck but one was sick,
The other fled for she saw the trick,
Forever it will seek her out,
But she will run as sure as trout,
Blind the thing with the arrows plenty,
It aimed and knew it surely missed me’

Daphne never sang above a resonant whisper. Not only did it invite the sounds of the forest to provide a chorus, it kept her hidden from the cloaked wanderers of the night. As evening let go of its smoldering embers and colors turned to grays, she headed towards one of the many recesses of the forest she called shelter. But high summer was a time when even the rain left countless places for her to sleep. On nights such as this, when the cloudless sky invited the crescent moon to shine unattended, Daphne could fall wherever she stood and call it sleep.

The cicadas and the tree frogs made dusk palpable as Daphne neared a rocky overhang by a stream she called her own. An owl hooted from the distance and took flight in its late arriving wisdom. Creatures of the night emerged and Daphne recognized their sounds. Darkness took hold and she looked within herself. She felt like singing again but another sound stopped her. It was the sound of a large mammal trampling the forest floor like a giant through a village.

The sounds of the forest carried a resonance like an instrument does in an orchestra. All might be playing, but each and every one has a truth unto itself. The sound of the wanderer’s carried with it a diminishing falsity, a lie made clear by the woods.

By the time Daphne peeked over the ridge, a pair of glowing green eyes were scanning the area. The eyes cast a pale circle of light that made the wanderer appear like a creature navigating a sick little world with fluorescent lighting. Another pair of eyes joined as the transmissions became more clear.

“Any signs? Over,” an electric voice said.

“Nothing but the trees, as usual. Over,” one of of the wanderers said, in a muffled voice to his own hand.

“Another walk in the woods,” the other wanderer said.

“Don’t you just love the fresh air?” The first laughed, tapping on his glass helmet.

“That ship has sailed.”

“You always say that.”

“Not enough people left to sound witty, I guess.”

“Someone has to be. I guess that makes you the town fool.”

“That’s just your brain trying to get in gear and—“

Just as the wanderers reached the precipice of the rocky overhang, Daphne took to her heels. Her heart beat as the hummingbird’s as she bound through the darkness. She thought of praying to Zeus as she fled but knew he was either dead or indifferent to anything but the whimsy of the sky. If bated breaths were years, she lived a millennium in a moment. In spite of her swift-footed progress, a beam of light from above spotted her and called her caught.

“Stay where you are,” a projected voice called from above, “This is for your own safety,” the voice continued over the sound of the helicopter blade, “By order of the Apollo Initiative you are under our control. Do not try to flee or you will be shot.”

The crescent moon was gone and the sounds of the forest were obliterated by the helicopter. As it hovered, Daphne made out a pair of arrows on its side making an X, one was golden and the other gray, one sharp and the other blunt. By the time she turned around, the two wanderers in full hazmat suits were approaching. Everything felt dead and hard to Daphne, like she was the last inhabitant of the moon and a pair of astronauts had landed.

“I told you she existed,” the first wanderer said.

“Stay focused. We don’t want to scare her,” the second one laughed.

“She probably speaks forest. Like an elf,” the second one laughed.

“Pull back that chopper. Can’t hear a fucking thing. Over,” the first one said to his hand.

“Right. Don’t want Apollo to see this. Now that we have our virgin.”

As the helicopter drifted back beyond the trees, the stilted breaths of the two wanderers intruded. Daphne felt like her toes were taking root and her limbs were are stiff as trees in winter. Her tangled hair hung heavy as she tried to see if there was life beneath the masks.

“Just do it,” the second one said.

“Give her a moment, for Zeus’ sake,” the first one implored. “You are a very lucky girl. Do you know that?” He yelled.

The last person Daphne had spoken to was her mother the night before she fled to the forest. She had replayed that night over and over in her memory. She remembered the sour smell of her mother and the wheezing words. She was haunted by her bloodshot eyes and feel of her hot skin. But the hell of it was the nonsensical words coming from a mouth she once listened to when that mouth once spouted fantastic tales with a mellifluous tongue. All that remained of anything was the song and that was all that Daphne could do in the face of it all.

(Daphne singing)
‘They chased her barefoot through the dark,
Until from head to toe she was bark,
They bid her speak before they would ravage,
In all their wisdom they still were savage,
Poke and prod in her virgin system,
Cures are curses don’t make me list ‘em,
Now do your worst you Apollo slaves,
And cast me among the countless graves,
I’ll tell you a secret now hear—“

When Daphne saw the dart in her thigh, the poison had already taken her song away. Time leaked out of the forest and another darkness fell. She felt nothing when she fell back and closed her eyes to a dreamless sleep. Only her feet had held fast to the earth in spite of the fall. Her dislocated kneecaps were no different than the ruins of a tree blown over in a sudden gust from nowhere.

“I wanted to hear the end,” the second wanderer protested.

“At least she knew it was coming,” the first one muttered, putting away the dart gun.

“She’s a virgin system. But is she the one?”

“Kind of a waste. She could really sing.”

“Shit like that doesn’t matter. Go, get her fully prostrate so we can check her vitals.”

“Which one did you shoot her with?”

“If you start singing, I’ll shoot you with something else.”

“Never could sing. Not a note. Damn!”