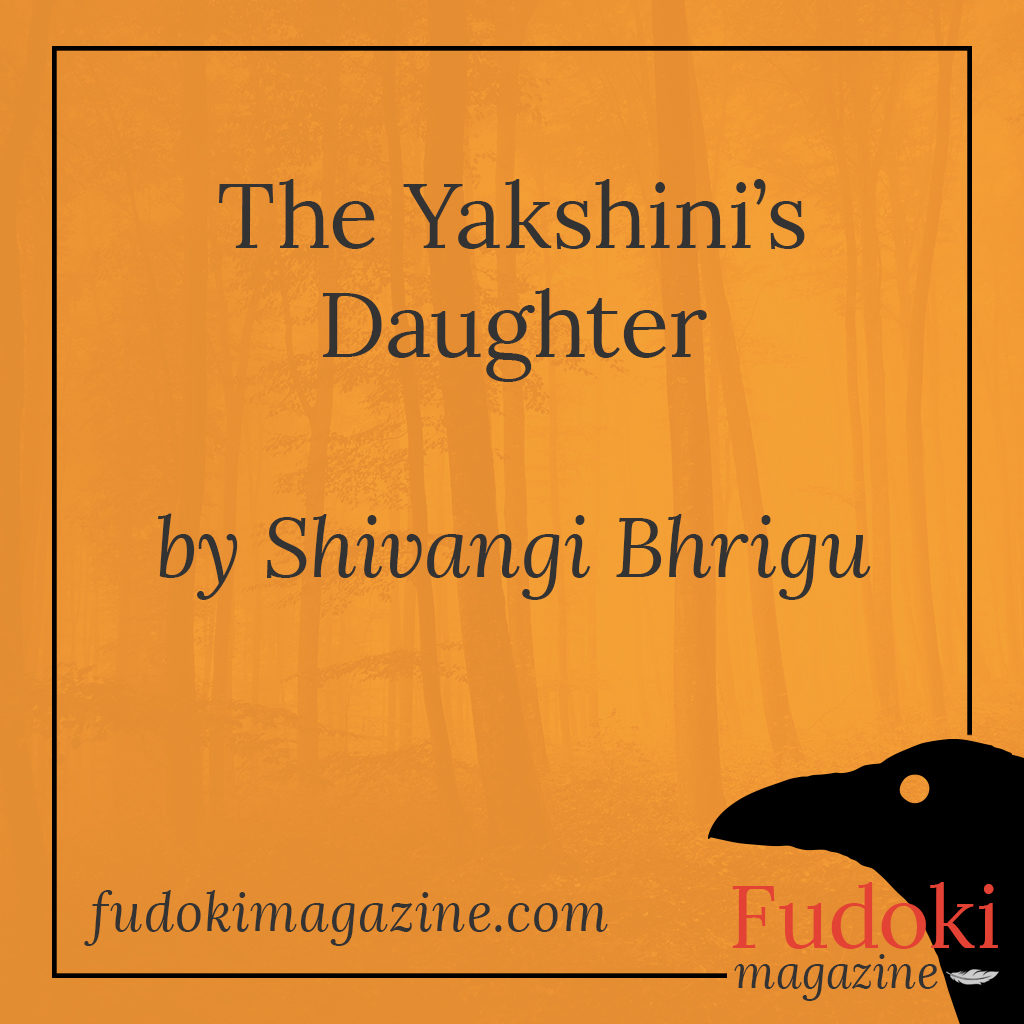 Tears mingled with raindrops. Water dripped from her earrings onto the slopes of her shoulders. Her thick braid intricately woven with buds of jasmine now drooped, heavy with dampness. Her clothes, soaked through, had a translucent appearance. But for once, Nilambari hardly cared.

In her lap, lay her daughter’s head, her body on the muddy jungle floor.

It was only Nilambari’s powers holding her alive now, and by a thin, eroding string that could snap at any moment. As a yakshini, there was little she could do. But she would do everything. Losing the girl’s father had been hard enough. The memory of Paarthiv’s handsome smile broke a sob from her lips.

He had been one of the rare mortal guests of Kubera, god of wealth and king of yaksha, to the annual feast of spring. Kubera loved to impress mortal, basked in the pleasure of stunning and enchanting them. It fed his ravenous ego, but Kubera was not guileless either. He knew not to fling doors open for streams of mortals. Greedy, thieving and untrustworthy mortals.

No, Kubera plucked them out with care, during his travels to the mortal lands, to honour his worshippers. And his guests were seldom amongst his worshippers. That would turn into a demanding nuisance in no time. Kubera much preferred non-worshippers, those who claimed not to be interested in wealth but, for the most, turned out to be easily swayed once they crossed the threshold into Alaka.

Paarthiv had indeed vacillated upon walking into Alaka, but not because of the lavish adornments and treasures displayed expressly for the eyes of Kubera’s special guests. He had stopped in his tracks, his breath caught in his chest and his mouth dry, at the sight of Nilambari, one of the yakshini of Kubera’s court, tasked with taking care of the special guests. Although she had not paid him any particular attention at first, the attraction ended up reciprocated by the end of the feast and Paarthiv asked her to be with him. He could not, would not, stay in Alaka. He had his duties, and he would understand if she felt the same way.

But lovestruck Nilambari had wanted to leave with him and accompany him to his world. Of course, she knew the affair would be of limited duration; he was a mortal, she was a yakshini, a nature-spirit, immortal. She would not ever age, he would and faster than she, for whom time passed so slow, could imagine. But she went with him anyway. As a yakshini, she was free to leave the court and return as she wished. Kubera had no strict rules and the yaksha often did dally with mortals when they took fancy for it.

She got far less time than expected, however. Soon after returning to the mortal world, Paarthiv fell ill and Nilambari lost him to death, and had to return to Alaka. It was strange. He was not her first lover, but she had not felt pain like this before. It was too unbearable to live with. The news of her pregnancy came as a salve over her aching, festering wounds. Mortals and yaksha could procreate together, she knew that. She had not expected it.

The little girl she had birthed was her blessing and deliverance. She didn’t make Nilambari forget Paarthiv but she made it so much easier to live and breathe. She had her mother’s rich brown skin and rosebud mouth, and her father’s long, fanning lashes and light amber eyes, shaped like almonds. She had grown up into a beautiful girl of nineteen years with her mother’s lush curves and her father’s heart laughter. Until a wild boar had found her on his path of devastation and fatally gored her in her side.

It had been too late to heal her when Nilambari had found her. There was just enough of her left for Nilambari to hold on to, as tight as she could, until someone more powerful came along.

“You should let go.” She didn’t have to look up to recognise her king. She didn’t look up. All her attention remained focused on her daughter.

“You have to save her. You can save her. Please… help me.”

Kubera sighed and seemed to shift with discomfort. “She is a mortal. It is her fate to die this way, Nilambari. We cannot change it. Rather than extending her suffering, you ought to let her go.”

“She is not yet dead. And you are a god. Surely, there is something you can do! Save her, I am begging you.”

He remained quiet for a long time. It felt like an eternity.

“Well,” he finally said, and from his tone, she knew that if she looked up, she would find that capricious smile that meant something undecipherable and terrible. “Something can be done. But it comes with a cost.”

She would do anything. “Anything.”

“Think well. Your existence for hers.”

“I agree.” Her life without her daughter would not be worth anything anyway. She would much rather her daughter lived, long and happy, in her place. “I agree,” she reiterated firmly.

“Very well.” Kubera crouched beside them and took hold of Nilambari in one hand and her daughter’s in another. “You can let go now.”

Before Nilambari’s eyes, her daughter’s eyes fluttered for a moment as a breath shuddered through her body. Then she went still.

Not even a breath.

Kubera smiled, slowly, dangerously. “Your existence for hers. She has to die now, I cannot change that. But she will be born again, in this same body and live up to this same age. It will be a cycle that will allow your daughter to exist. You will have to go now, Nilambari. You will fade away with no one to remember you but me.”

The fingers tangled into her daughter’s hair dissolved into dust and panic gripped her. And the last thing she was conscious of was Kubera’s raucous laughter.