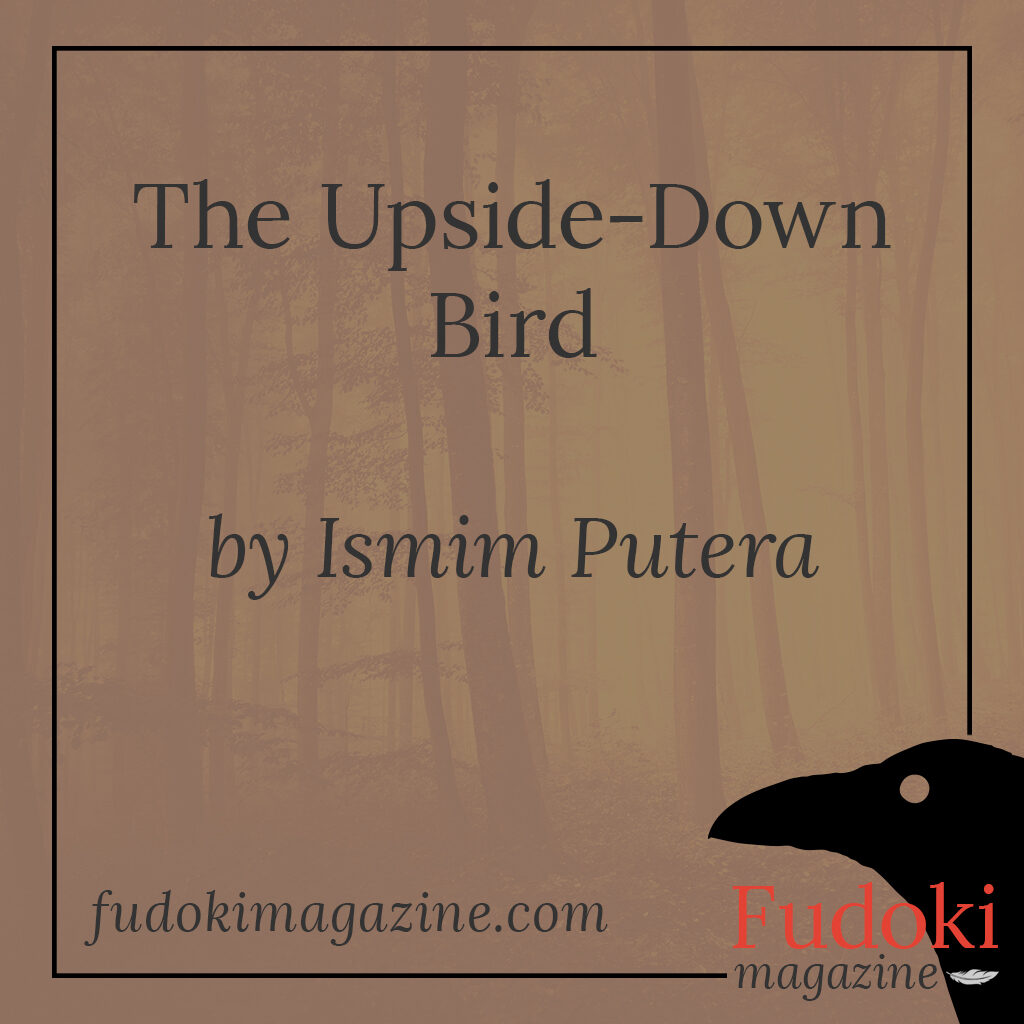 “Is that the bird, Atuk?” Arif wrinkles his sweaty forehead.

A penguin-like fowl is perching upside down on the Angsana tree, swaying to and fro against the wind. It uses only one foot to grab the branch. It is ominous if it perches upright on the roofs of homes with young infants or pregnant ladies. The birds would snatch the unfortunate child’s soul and fly off with it, soaring high into an unknown void. The baby would turn blue and eventually die.

“Who knows?” says Atuk, hunching his bony shoulders. “People say it’s no bigger than a goose, but smaller than a truwok. When it stands its head is bowed. You can never see its face or eyes. And when it flies its body is upside down, the head and chest facing the sky.”

“Atuk, why would they kill babies?”

“Because that’s their job. They are kept by people who excelled in such witchcraft,” answers Atuk. “If the parents don’t confront the owner and give whatever the owner wants, or if the owner cannot be found, it’s a bad sign. The baby has no chance of being cured.”

“I see. The bird is used to blackmail people.”

“But its blue blood grands longevity.”

“Lost in thought?” asks Salima, his wife, startling Arif a little when she hugs him from behind. She, too, is focusing on the luxuriant jungle behind his house. Of course, he did not want to trouble her with old wives’ tales. Three days ago, he had brought his wife to his kampung in Kuching because in Sibu, there’s no relatives to take care of her. At the same time, he wants Emak, his mother, an experienced midwife, to assist Salima. Emak would certainly be happy to welcome the birth of her first grandchild.

That afternoon, while they are enjoying their lunch, a screech sends icy chill down their throat.

Arif draws close to Atuk, who spontaneously muttering inaudible words of Arabic runes. “Atuk, is that…”

God! The cawing is a slaughtered rooster squawking in pain, followed by the

bleating of a goat in labour. It shouts directly from the langsat tree beside the house. Emak’s face immediately turns chalk-white. She leads Salima quickly into the room.

Arif walks out from the kitchen with his Ruger 10/22 rifle. He aims his weapon at whatever strange-looking birds on the tree. He fires three shots at a shape-shifting silhouette climbing the trunk. The deafening salvo shakes the tree. A handful of burnt leaves rains down on him. Atuk darts down from the house, following Arif, holding trimmed lemongrass with him. Of course, that cooking herb does nothing to the bird, but it repels dark arts that fuel the malice. The only way to kill it, is placing the skin of an Ular Saw Batik in its nest. But no one have ever seen its nest.

In the room, Arif finds his mother sobbing as she strokes Salima’s bulging belly.

“I…I’m fine.” Salima sits herself up, looking confused after all the drama.

At night, Arif hears that similar tune again. “It’s the bird!” he murmurs in vexation after strolling around the room. He grabs a parang to chop anything that might fly at him. The shrill sounds so close, as if the bird is hanging between his thighs. On the bed, Salima is sleeping quietly.

“Arif, open the door! It’s me, Emak.” A soft repetitive knock hits the door. He opens it and Emak rushes in.

“You hear it too?” he asks hesitantly. Emak nods wearily as she glances at Salima.

“Do nothing. Guard your wife. Lock the window. The bird’s trying to get into this house!” Emak warns him.

For three consecutive nights, the song remains persistent. The crow is appalling, like shrieking like blunt knives sharpened on a stone slab. It starts around twelve and howls intermittently for two to three hours. Arif, his mother and grandfather would take turn guarding the house.

“It’s been more than ten years since you left, and it’s never been heard since,” Atuk sighs softly. Arif rolls a spiky lump down into his throat. Which damned person is keeping them? Why is he being targeted?

“What must we do?” His voice deepens, mimicking the tempo of the birdsong.  Fortunately, Salima never wakes up despite the disturbing commotion. The birdsong stops exactly at four in the morning.

In the plane, Salima’s eyes are puffy.

They have had lost the child. A week ago, Salima had slipped beside the well while talking a brisk walk. She was admitted to the hospital for second-trimester miscarriage. Right after the funeral, Emak discovered pieces of blue feathers scattered around the well. At dusk, a nauseous stench encircled the house. Trusting his gut feeling, Arif emptied the well and found a bloated carcass of an unknown animal which had stained the water indigo for days. Atuk chopped down the langsat tree and found a triangular conical clay nest hidden amongst the yellowing foliage.

“The evil-doer will rot in hell!” claimed Atuk at the top of his lungs.

From the plane window, Kuching is shrinking into an oblivion. Arif takes out the feather from his pocket and brushes its purplish vane playfully with his thumb.

“Who opens the cage without my permission?” Anger surges into his head. He projects the faces of all possible traitors in his mind. There are only four persons in whole Borneo, including him, who sells the blood of the bird for its spectacular medicinal properties. One tiny vial costs ten thousand ringgit. “It took a decade to ensnare all twenty of them!”

An intense dizziness wakes him up from a nap. God! The plane flies like the bird—upside-down!