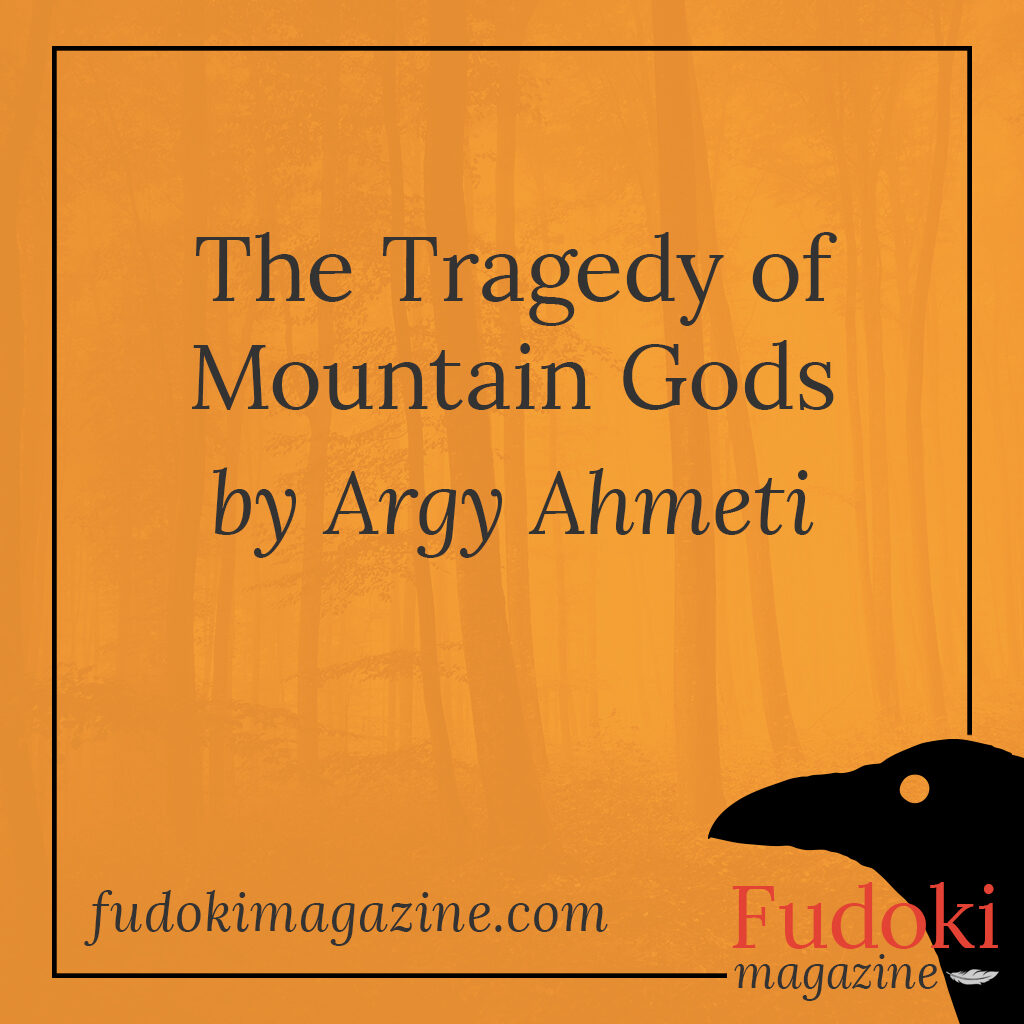 “How many suns have passed since our last hunt?”

“Too many,” Shpirag, the smaller brother says, aiming his arrow at the giant deer, a forest for antlers. Beautiful, I must have it. The arrow flies, piercing the air and causing hurricanes as it shoots forward. A deafening clap follows, accompanied by horrendous earthquakes.

The brothers were inseparable in their childhood days, and even though they are the same age, one is larger. Tomorr, protective and powerful, wields a sword that carves rivers and shoots lighting every time it’s drawn. Then Shpirag, although more timid and frail looking, being just as capable. He nests the eagles that have given him eyesight so acute he can swipe a fly’s wings off with an arrow, while his mastery of the flail blinds his opponents. But time does what time does. And the brothers grew up, had their own people to look after, their own territories. And the brothers grew up, and grew old, and grew apart. Hunting once a year, when En gifts them with the brightest and warmest sun, is the only time they are able to spend together.

“I have seen it, brother,” Tomorr holds a mountain sized boar upon his wide shoulders. “The sparkle in the eyes, the clenching of the heart that we used to hear stories about. Love, dear brother.”

“Destiny, a trickster entity. Big brother, I too, recently down in the fields, have felt and tasted that sweet nectar. Let us meet again next year with brides by our sides.”

Destiny, a trickster entity. A city lies between the territories of the two mountain brothers, Tomorr and Shpirag. A city often frequented by a nymph, a gorgeous lady that only those of godhood bloodline can see the true form of. And Tomorr saw her from afar, ever so tempted to go into the city and take her. But a nymph cannot be taken. A nymph goes where a nymph wants, and Tomorr had to go and make her want him. All night, as the moon partly covered by clouds was the only light in the empty city streets, they played. Osum ran, smiling. He chased. And they meet in the center, where the nymph circles him with her dances.

“By En, you have taken my heart captive since the moment I saw you. I will have you for my first bride, Nymph of Berat.”

And she fancied him too, the strong Baba Tomorr. Protective mountain god and a loving brother is also a romantic sweetheart, her heart was stolen. Shoulders wide enough to hold a country, long silver hair that reach the back of his knees, arms that can reach Rome and break the soil between seas.

But alas, this is a tragic story. Tragic, for Tomorr was not the first mountain god she met. The previous day, Shpirag laid his sight on Berat, the city between the brothers, with the Nymph, masked and unnoticed between the humans, being as visible to a deity as the sun on a cloudless day. He was dumbfounded, I must have her. And she saw the god looking at her from afar, and she gifted him a hidden smile. All night, as the full moon covered by no clouds shines its silver lights as bright as the sun, they played. Osum ran, smiling. He chased. And they meet in the center, where the nymph circled him with her dances.

“By Tomorr, a name I would never say in vain, you have taken my heart captive since the moment I saw you. I must have you for my first bride, Nymph of Berat.”

And she fancied him too, Wise Shpirag. Keen, observant, and ever so poetic in his language, a nurturing god that swears on his loving brother’s name.

And time goes on. One night, the nymph goes to one, and the next night to the other, and they know not. Touch her, she lets them not. And the brothers are impatient, wanting to see her more often than every other moon. But she cannot. Once, she went to neither of them. Not to Tomorr, neither to Shpirag the next moon, and they were both worried. Though they cannot meet each other yet, they cannot leave their posts for their godhood comes with chores. Gods cannot descend in Berat whenever they feel like it. But she came back. The nymph continued where she left off, visiting one and then the other. They asked her, worried about her, but Osum simply smiled and avoided the question. In truth, she spent two moons walking through the fields between the two territories of Tomorr and Shpirag. Conflicted, she felt. A single tear of hers creates a small lake in between, but that is all she sheds for now.

A year has almost passed since the last time the brothers went out to hunt. The sun shines brighter in anticipation, the light of the Nymph feels warmer, soothing the oblivious gods. They are used to her presence. Cherish every moment they spend looking at her as she spends the night in each of their homes every other night, but they cannot touch her. They cannot feel her, but her smell of a thousand gardens. And they get impatient.

I know I see her every other moon and I saw her last night, but wait I cannot. I will see her!

I know I see her every other moon and I will see her tonight, but wait I cannot. I must see her!

The two brothers, eager to lay their eyes upon the nymph during the daylight, set foot in Berat. And they circle the city, each opposite of the other, until they meet in the center, right between the two territories.

“Brother!” they both smile at the pleasant surprise and walk to greet one another a day before the hunt day. And each talks about the one who has captured their heart and mind, the one who has their eyes hungry to see more. Arms dying to hold. And they both laugh together. It is fate for two brothers to be both find such a pure love.

And a light captures their attention. A nymph can hide very well among humans, but the senses of a god cannot be tricked. Excitement engulfs them, breathing in and turning to each other to introduce the beautiful maiden nymph, the beautiful Osum. And their eyes meet… and the smiles fade…

This story first appeared on the author’s own website.

2 thoughts on
“The Tragedy of Mountain Gods”