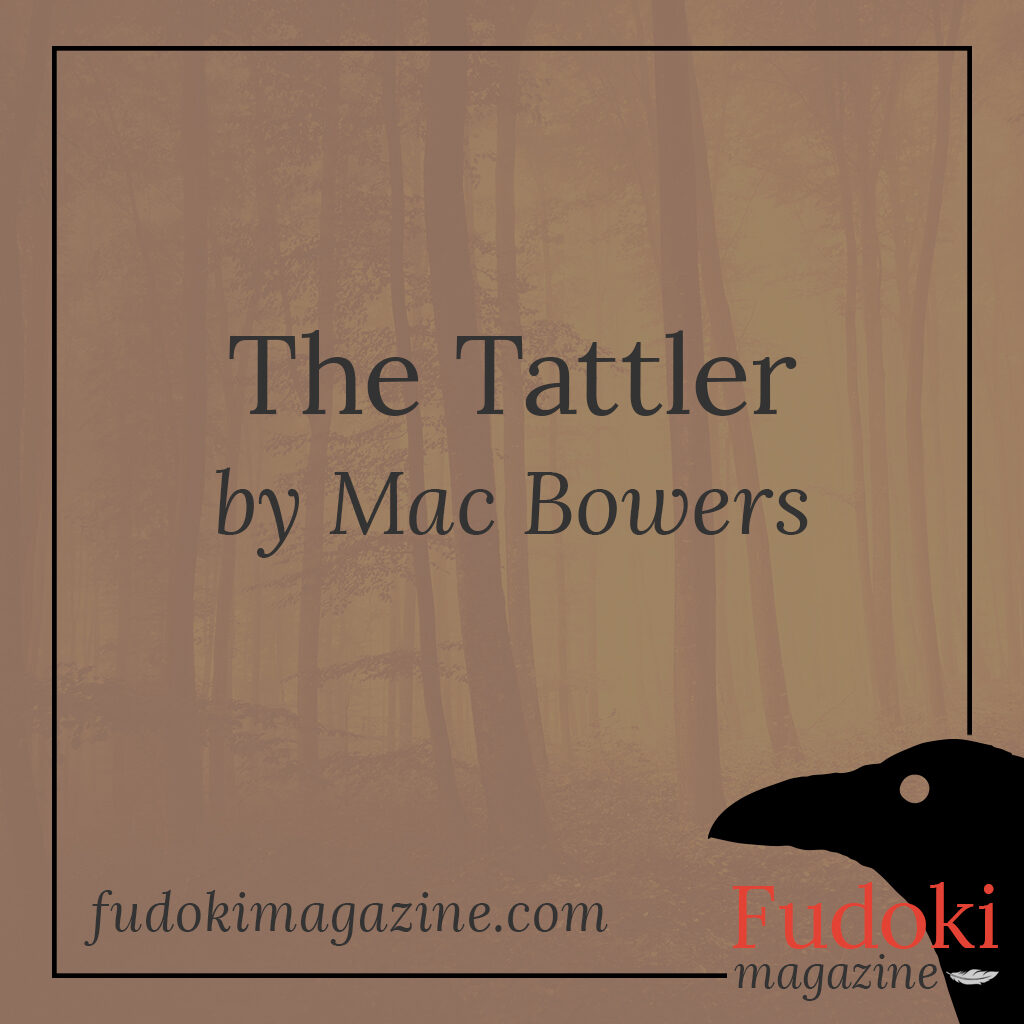 Alice woke up with dirt under her fingernails and the Tattler sitting crisscross on the edge of her pillow. Alice blinked twice. She wasn’t hallucinating. She and the Tattler looked each other up and down, but Alice’s eyes didn’t have far to roam; the Tattler was a generous two inches when standing, but sitting knocked that down by half. His eyes took longer, and when he was done, he tipped his black top hat to Alice who, not knowing what else to do, nodded back at him.

“Knock knock,” Alice’s mom said, opening the bedroom door. “Time to get up.”

She made her way over to the bed, and the mattress dipped with her weight as she sat down. “You’re going to be late for school.”

Alice rolled onto her back, and her mom caught the dirty streaks on her face, the darkness under her eyes.

She frowned, said again, “Get up,” and closed the door behind her when she left.

Alice didn’t expect the Tattler to follow her out of bed, but he did, bounding to the floor and trailing just at her heel with remarkable ease as she moved around the room. She did, however, draw a line at the bathroom. The Tattler respectfully obliged, tucking himself neatly into the molding of the wall just outside the bathroom door like it was a bench while Alice showered, the water running brown, and then red, and then brown again down the drain.

When Alice ventured downstairs, so did the Tattler. He sat on the edge of Alice’s cereal bowl, his shoulders shrugged up around his ears, his feet skimming lightly across the top of the milk.

Across the counter, Alice’s mom made coffee. She handed a full cup to Alice, lifted her own to her mouth, and said around it, “I didn’t hear you come in last night. Were you out late with Nora again?”

Alice paused, and so did the Tattler. He looked from Alice, to her mom, and back to Alice again. Alice kept her eyes trained on her breakfast.

She shrugged. “No, not really.”

The Tattler bolted to the other side of the counter, his tiny feet making no noise against the marble. When he reached Alice’s mom, he used her baggy sleep t-shirt to crawl his way upwards. He reached her shoulder, cupped his hands around his mouth, and leaned towards her ear.

Her brow twitched as if something itched and then, after a few seconds, it drew down over her eyes. She lowered her mug to the countertop, and her voice went with it.

“You know your curfew,” she said, and then added, before Alice could argue, “Grounded.”

Which was just a bit ironic, if you asked Alice.

The Tattler went to school with Alice, lounging against the slope of her neck. She didn’t speak to him, nor he to her. He was a silent companion in all her classes and she hardly noticed him aside from an occasional foot brushing her collarbone.

At lunch, he stared at the empty seat next to Alice. The seat seemed to stare back, so she put her backpack in it to block its heavy eyes.

“You’re probably lost without your other half.” Emma laughed from her seat across the table. She nodded at Alice’s backpack when Alice met her eyes. “Don’t freak out. She’ll probably be back tomorrow. Anyway, so I was thinking for our senior prank we could all just, like, ditch class. But not really ditch, you know? More like we all go sit outside our classrooms and just, like, don’t go in.”

Alice plastered on a grin. She said, “That’s an awesome idea,” when really what she wanted to say was that it was the stupidest idea for a senior prank she’d ever heard, and also that Emma had spinach stuck in her teeth.

The Tattler was at Emma’s ear before Alice had time to let the fake smile die, hiding his mouth from Alice’s view as he whispered to Emma.

Emma frowned. She stood up, giving the Tattler just enough time to jump back down on the table before she said, “Yeah, well, let me know if you come up with something better,” and stormed off with her lunch tray.

Alice didn’t talk to anyone for the rest of the day. Especially not the Tattler, who had an air of self-satisfaction about him all the way up until the final bell rang.

Standing outside the school, she told him, “Don’t come home with me,” even though she knew deep down that he would, and there was nothing she could do about it. The Tattler shrugged and took his place in the crook of her shoulder for the ride home.

There was a strange man in the house when she and the Tattler got there. He was sitting across the kitchen counter from her mom, not unlike the way Alice had done that morning.

When the front door closed behind Alice, both the man and her mom turned to look at her.

Her mom said, “Alice,” and her voice broke there, but she said it like she’d meant to say something after it.

The man said, “Hi, Alice. Would you like to sit down?”

He gestured toward the empty seat next to him, but Alice didn’t see it and she didn’t answer him. She stared at the counter space in front of him, and watched the way the ceiling light caught the gold of the badge that occupied it.

The man waited a beat. Alice’s mom lifted a shaking hand and pressed it to her mouth. The Tattler, his interest piqued, moved to stand at attention on Alice’s shoulder.

“Alice,” the man said, “were you with Nora King last night?”

The Tattler was staring at her. Alice could feel it, like a pressure against the side of her head. And he kept staring at her, waiting, until she said, hesitantly, “Yes.”

The man nodded. So did the Tattler. Alice’s mom began to cry.

As though the words were strangling her, she said, “She’s dead, Alice.” Pause. A deep breath. And then a strangely steady voice as she asked, “Did you—”

“No,” Alice said. She froze and before she could say anything more, before she could explain, the Tattler was scurrying off her shoulder. She caught him in her hands, squeezing him so tightly that she was sure his face would turn blue. He squirmed, kicking his feet and pinching her skin between his fingers. She said again, firmly, “No,” but she looked at the Tattler when she said it.

He stopped and cocked his head at her. He frowned. He wriggled out from her grasp and she let him, only instead of heading toward the man, he crawled back up Alice’s arm. He didn’t stop at her shoulder. He kept going. He got to her mouth. He climbed in.

Alice coughed. She sputtered. She choked.

Not long after that, the Tattler did all the talking.