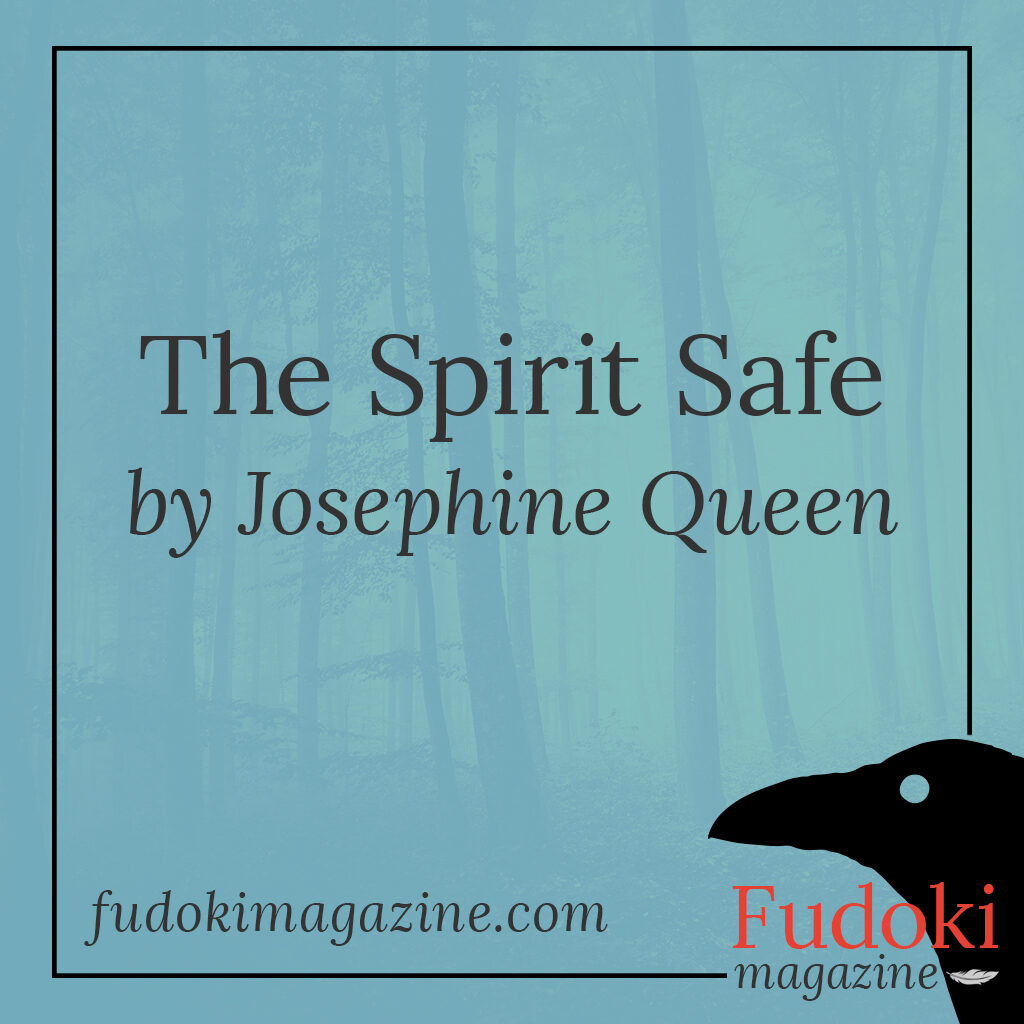 Meredith stood in the dim corner of the room, mesmerized by her convex reflection in the rabbit’s eye. The animal shivered, as if it knew what was to come. Meredith wanted to climb into the cage, stroke its white matted fur and offer comfort. She’d visited the Distillery many times, but this was her first time as Spirit Safe.

The mage Sandrine and the Distiller hunched together, peering into the jars jumbled upon the shelves stacked against the cold stone walls. The liquid within the jars churned uneasily—the spirits of long-dead entities, suspended for eternity in glass prisons. Meredith knew it took some time; finding the right spirit was an important part of the process. She sighed and turned back to the rabbit.

“It’ll be alright, little one. The mage wants to know who’s been poisoning her well and putting hexes on the livestock. So it’ll be a small thing for you. Not a big spirit like the one that killed the hound.”

It was possible the rabbit was a foundling, as Meredith had been. Wandering in the woods, clothed in rags and scrapes, Meredith couldn’t tell Sandrine from where she had come. The only mage for miles, Sandrine had been returning from a town beyond the mountains when she had come upon the tiny scrappling that turned out to be Meredith.

Meredith wasn’t sure if that was her birth name; the memories of her childhood were hard to pin down. They slid behind the things she needed to remember—which goats to milk, which books to acquire for Sandrine, which herbs to forage. Sometimes on the darkest nights when both moons were new and the night pixies sang into the void, she smelled burning tar and scorched earth. She would plug her ears with wool to silence the distant screams and crackling of flames that followed her into her dreams.

When she tried to tell Sandrine, the mage would sharpen her words on Meredith and take the strap to the poor girl’s back.

“There is nothing to remember,” she would say. “You were nothing, a foundling, a worthless, unwanted child. You’re lucky I found you and gave you a home.”

“Meredith!” Sandrine’s voice sliced through her thoughts. “Bring the rabbit.”

The girl obeyed, shuffling across the flagstones to her guardian, her arms wrapped around the cage. Sandrine snatched it and took the rabbit out by its scruff.

Two large vessels sat in the middle of the vast room. Pipes travelled between the two. One of the pipes came to rest on a metal table equipped with leather straps. Beside the table was a wooden chair, also dressed with leather bindings. Meredith knew the liquid would be boiled in the vessels, the vapor from the distillate would travel through the pipes to whatever was strapped to the table—in this case a rabbit—and would pass through the unfortunate animal. The diluted vapor would then be funneled into the Spirit Safe—Meredith.

The Distiller brought a jar of blue liquid to the vessel. The fluid inside the glass spun into dervishes, then settled onto the surface before spinning into a vortex that split the liquid in two. The Distiller lifted the heavy lid from the vessel and released the contents of the jar into it. Sandrine strapped the rabbit onto the table, standing clear of the sharp claws at the ends of its bucking legs. She motioned to Meredith.

Meredith sat in the wooden chair and Sandrine secured the straps. The vessel shook as the pressure built. The pipes clanged. The rabbit screamed, then fell silent.

Meredith smelled the sweet grass of a meadow, the musk of newly turned soil, the dankness of a burrow. The rabbit’s memories faded and darkness licked at the weak light that circled Meredith’s feet. Cold fingers caressed her skin, long dead voices whispered in her ears and she smelled burnt tar, heard the screams from her nightmares.

“At last,” the voices said. “We’ve waited so very long for you.”

“Well?” Sandrine’s voice came from beyond the mountains. “Ask them who’s poisoning my well water.”

Meredith tried to push the coldness from her head, tried to quiet the voices.

It came back to her in a rush—the night of fire, the panic. The screaming. The flames that swallowed the village in the clearing. Meredith had run, but not before turning and seeing the laughing men. The ones who set the flames. She had thought them demons, her childish mind drawing characters from her mother’s cautionary tales. One tall figure in the middle of everything. Turning, turning. Meredith gasped as she saw the face.

“Fool child!” Sandrine screamed. “Tell me who it is.”

The Distiller stepped forward, speaking incantations as the coldness seeped from Meredith’s body. She watched in wonder as the vapor retreated into the pipes, back through the vessels into the fluid within. The Distiller sealed the liquid in the jar and placed it back on the shelf. He discarded the limp body of the rabbit.

Sandrine unstrapped Meredith and clasped her arms in clawed fingers.

“Useless,” Sandrine hissed into Meredith’s face. “I should put you in the well.” She stormed from the room.

Starshine fell across the landscape, a sepia blanket that muted the sharp edges of the distant mountains. Meredith trailed Sandrine along the dusty road. Night pixies danced through the darkness, their trails of blue light whispering along behind them. Meredith remembered dancing through the forest after them on midsummer nights, the music of her sister’s laughter close by.

Now Meredith knew who had set her childhood aflame. And she knew enough to keep her memories secret. She knew enough of spells and tinctures and knew, by the rhythm of the mage’s dreaming breaths, when Sandrine would be in her deepest sleep. Meredith smiled at the rising moons and looked toward Sandrine’s form melting into the gloom.

One thought on
“The Spirit Safe”