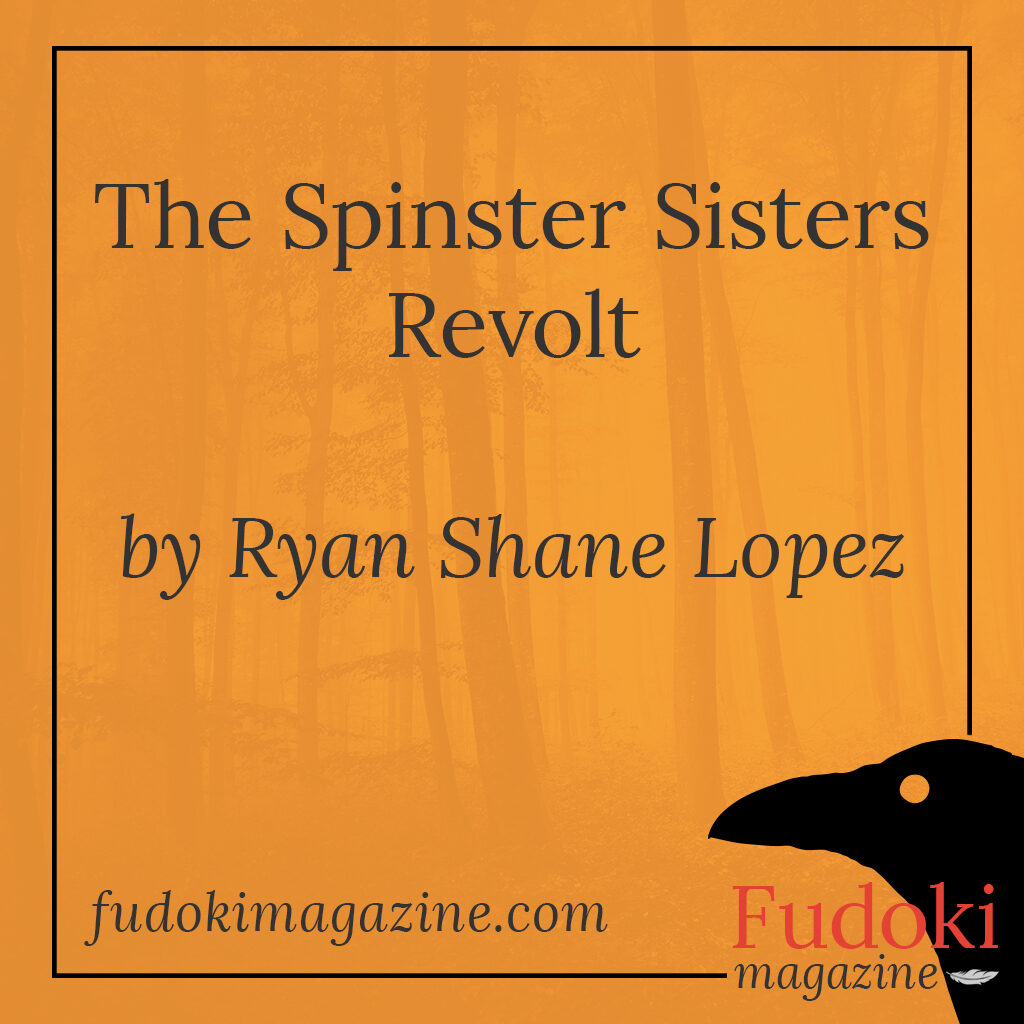 By order of His Majesty the King, all spindles and spinning wheels are henceforth forbidden within  the borders of the Kingdom, on pain of death.

Hear me, Sister Spinsters, and feel the full weight of this egregious edict.

We spinsters, the lowliest in the kingdom, without wealth or property, husband or prospects, are being unjustly condemned when asked, nay forced to surrender these most essential tools of our trade, indeed our very livelihood. You’ve all seen the bonfires. You’ve watched the Collector pulling his cartload of splintered spindles and broken wheels down your street, flanked by castle guards who rely on sharpened steel and gleaming armor to intimidate ragged and half-starved women. And not a halfpence offered in compensation. Don’t expect them to purchase extra fabric from the neighboring kingdoms either. Yet come winter, mark my words, they’ll expect not one garment less than last year’s production. How like royalty to butcher the cow, then ask why the milk has run dry! But ignorance is a luxury only the rich can afford. When the first snow falls and there are more backs than there are coats to cover them, I don’t have to tell you whose children will keep warm and whose will shiver.

I try not to mention it, but I have a niece who works as a scullery maid in the king’s castle and she told me a thing or two about the way they treat their servants up there. Even those who personally wait on the royal family are barely seen as human, only acknowledged when needed and forgotten the moment they step out of sight. Make no mistake, the nobility prefer to imagine us peasants as having no lives nor loves of our own. If they had their wish, they’d turn us all into lifeless statues who only spring to action when they call for more tea and cake. What do they care if a thousand spinsters starve to spare the princess one bloodied finger?

“But the girl will die,” says you.

Ha! Do you mean to tell me that despite access to every resource from the mountains to the sea, the king still fears his darling daughter will be too delicate to survive a mere pinprick and too daft to know better than to poke a spindle’s point? Educate the girl, says I. Buy her a set of golden thimbles. Better yet, send her to work alongside the peasant children in the mines and the orchards. I’ll dare say that would toughen her up.

Besides, she will only swoon, not die. I have it on good authority, for my own niece works in the castle, that the prophecy clearly states the princess will sleep until she is awakened by the kiss of a brave and handsome prince. That doesn’t sound like such a raw deal to me? I would gladly sleep a hundred years for such a chance.

“But the poor queen was barren all these long years,” says you.

Might I remind you that she is hardly the first woman in this kingdom to have known the sorrows of barrenness. More than one woman here tonight has been driven out of a husband’s house because she could not bear him a child, myself included.

“But she is not just any child,” says you.

My niece, the scullery maid, told me as much: “An angel,” says she. “Carnation cheeks and coral lips,” says she. “To see her is to love her.”

There’s a name for that: ENCHANTMENT.

Every last one of you ladies would possess the grace and beauty of a princess if your fathers had been in the position to bribe fairies. Or haven’t you heard? The child’s been bewitched. The king “invited” every fairy in the land to his daughter’s christening. Fairies, mind you. At a christening! Are we a nation of Christians or pagans? It’s a small wonder one of those mischievous devils should utter a curse upon his babe. A misfortune, to be sure, but if you ask me, it’s one the king brought upon himself. Pissed on his own head and cursed the sky when he took it for rain. That pagan fool is no king of mine.

True, we cannot fight, not can we flee. But we can defy.

I charge you, Sisters, hide your spindles. Not all of them, mind you, or you will draw suspicious eyes. But if we are cautious and united in our efforts, we may yet keep our craft alive in secret. And a life of secret spinning is better than open submission.

So, remember this rhyme, my sisters, and recite it daily:

In the bushes, in a basket,
In your cupboards, in your caskets,
In your bonnets and your bodices,
Hide them places no one notices.
Meet in cellars and on rooftops,
In a cave or in a barn,
One bring spindle, one bring distaff
And both will leave with yarn.

As for me, I have given my spinning wheel to my niece—have I mentioned she works in the castle? This very night, she will hide it in the garret at the top of the tallest tower. She assures me the room is secluded and abandoned, so no one, least of all a child, is likely to stumble upon it or have cause to seek it out. We will spread the word that any of the king’s maids, servants, or farmhands who wish may go there to spin freely in their leisure time, seldom as that may be.

This wheel shall be a small symbol of defiance, hidden right under the king’s nose, or should I say, over his head. Small indeed, but not insignificant. As you and I are small, but not insignificant. With unity and determination, by one such defiance after another, our sparks shall form a fire to forge a better future for all spinsters. For even a king’s robe is woven and stitched together of a thousand tiny threads.