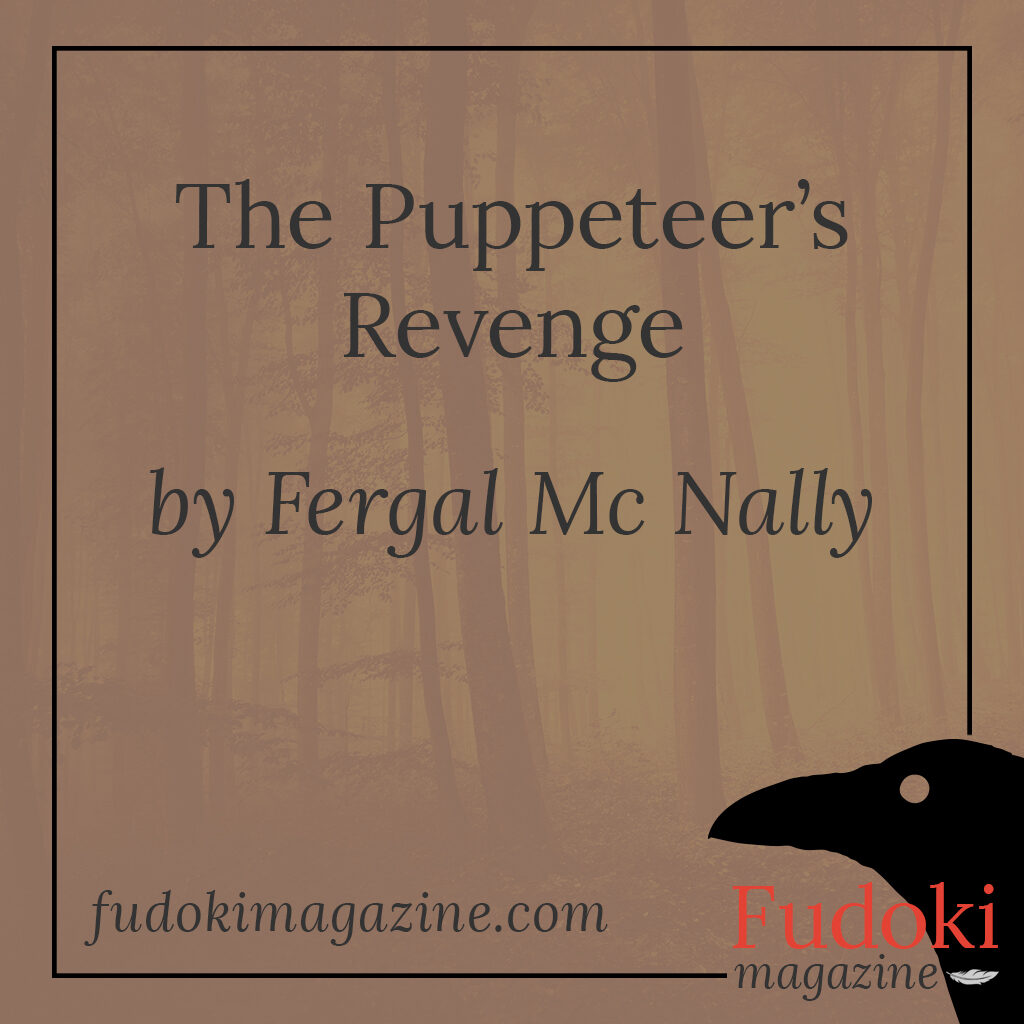 When the world was mostly grass and trees a puppeteer wandered the Earth. By day he plodded through the green, silent spaces between villages. At night he slept on the trail with his bag of puppets for a pillow. When he reached a village he covered his head in his cloak’s black hood, walked to the square with his eyes on the ground and set out a ring of candles. Though nobody had ever seen his face his arrival never failed to cause ripples of excitement.

As the sun set the entire town would gather in the square and fall into a trance as he made his wooden family come to life: when the puppet lovers kissed the people swooned; when the puppet soldier puffed out his chest their hearts swelled with pride; when the puppet mother cradled her new born child, her tender touch brought tears to every eye. As the puppets took their bows the audience threw coins across the candles. The puppeteer would disappear before the sun returned.

His fame reached the palace. The king ordered a performance. Messengers on white stallions were dispatched to the poorer villages. Some days later the puppeteer was lead into the throne room. The ceiling was a huge, black dome speckled with diamond constellations. Lords and ladies ate from silver trays held by naked slaves. The fat, sweaty king sprawled bare-chested on a golden, sun-shaped throne. The courtiers sat on the marble floor and the show began.

They gasped at the grace of the puppet ballerina. They howled like beasts as the puppet wrestlers fought to the death. Then, the puppet king appeared. The room was stunned into perfect stillness. The people had never seen such true nobility. Before the courtiers had time to think, they’d bowed to the little, wooden monarch. The flesh King sprang from his throne.

The wooden king tinkled on the marble as the guards dragged the puppeteer to the dungeon.

The harpist began a delicate melody. The terrified lords and ladies waltzed as screams seeped through the shiny floor. The captain of the guards returned with a small, wooden box. Inside a pair of bloody hands lay on white lace.

The King opened it, smiled and threw it into a corner.

As the sun began peeping through the velvet curtains, a slave brought the box to the courtyard and threw it in a fire. Flames ate the wood. A thick, black smoke-cloud formed above the palace. It sculpted itself into a pair of giant hands. The thumb and index finger kissed then hopped in the air. Below the dome the King sprang from his throne. His face filled with terror as he walked to the centre of the room.

The frozen courtiers stared in silence.

“Guards,” roared the King as he walked towards the door, “seize me.”

The captain grabbed the King’s shoulders. The smoke fingers danced above the dome. The King pulled out the captain’s sword and plunged it into his stomach.

“This is not my will,” he screamed as he continued his march. “I command you to seize me.”

The guards moved towards him. He swung the sword at their faces. The confusion was too much for men who lived by orders. They dropped their weapons and ran from the palace. The King climbed the North tower, roaring for someone to stop him. He stepped onto the battlements, saw the smoke hands and fell silent. The fingers gave a final, careless jerk and the King leaped off the roof. As he tumbled through the air his crown slipped from his head. It shattered on the ground beside his broken body. The smoke hands melted into the morning air.

The courtiers stared at the empty throne. Finally a lord broke the silence, “what do we do now?”

His wife picked up the puppet king and placed it on the throne. A sigh of relief filled the dome. The harpist struck up a merry tune and the dance began once more.

One thought on
“The Puppeteer’s Revenge”