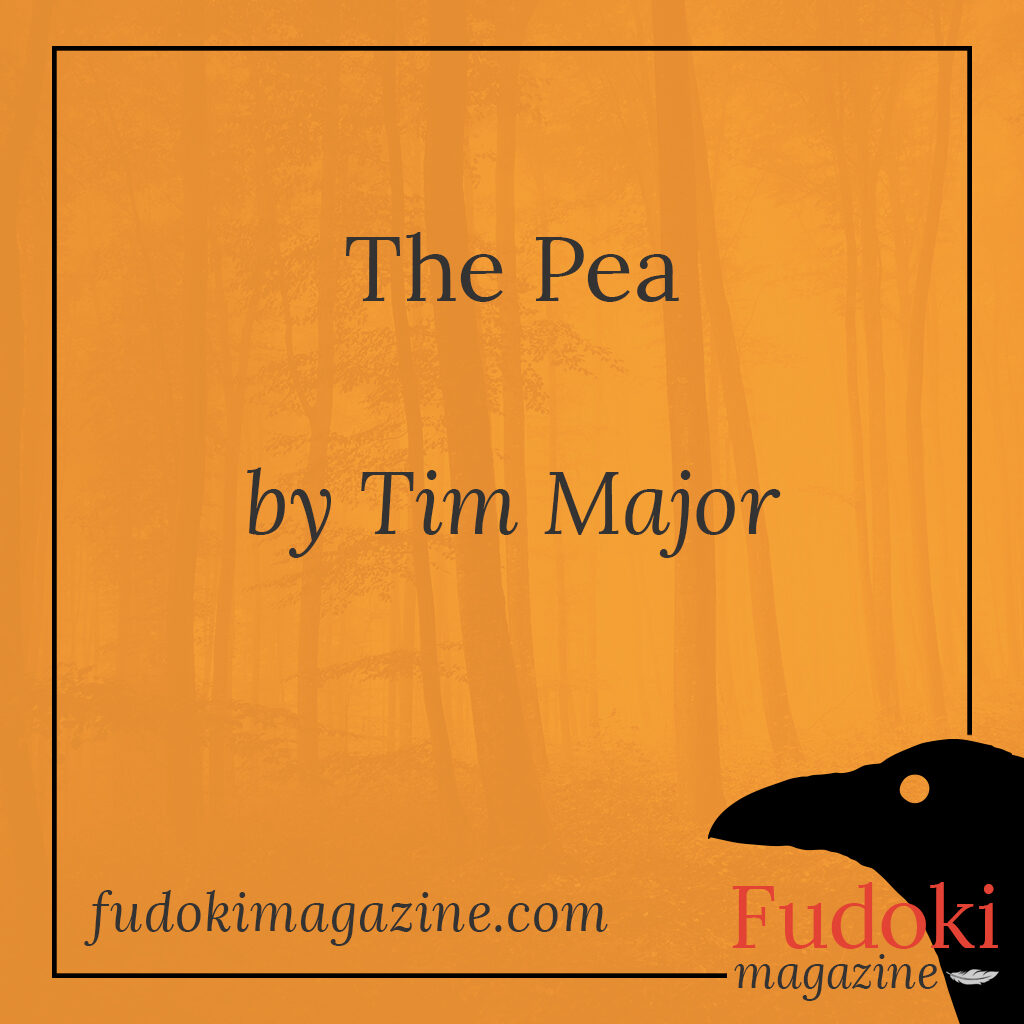 Two brothers regarded the pea on its tiny dais in its cabinet in the museum.

“Is it very old?” the younger asked.

“It is impossible. Shall we now proceed to an inn? I would speak more about our plans for this business partnership you propose. And I would discuss these matters of importance whilst sitting down.”

“You do appear pale. Have you heard the story?”

The younger brother frowned. “Every child knows it. A princess, arrived in the rain, proving herself of royal blood by means of lying upon twenty eiderdowns upon twenty mattresses, and yet still perceiving the pea beneath them all.”

“That is not the story I mean.”

The elder brother’s face darkened. “I am not sure you are in high enough spirits to enjoy it. You are welcome to borrow this stick from me.” He smiled. “Ah, I see you recognise it as the one father carried. He bestowed it on me, along with some other personal trinkets, just as he bestowed on you his wealth. I am happy to retain such a physical reminder of that great man.”

They both made the sign of a cross upon their chests, for their father had passed on a mere week before.

The younger brother felt somewhat embarrassed, for it was true that he had inherited a great deal of money and was now financially secure, unlike his elder brother. He accepted the stick, and leaned upon its handle, and imagined his father’s hand there. “Tell me the story.”

“It was the prince himself who ordered the pea placed here. But it was not contained in this cabinet at first. Do you see how the light refracts oddly through the glass?”

The younger brother peered and then nodded slowly. “I think I do perceive an oddness. But nothing so odd as the fact of a mere pea being in a case as large as this. Come, let us go and speak at length of our future shipping business. We will be equal partners, despite the differences in our finances. We are brothers, after all. But I insist that I must have equal responsibility in its operation and its reward. I am no longer a child.”

The elder brother bowed his head, but he did not move away from the case. “The reason for the peculiar effect is that this glass is thicker than your wrist.”

“For heaven’s sake, whyever would that be?”

“Hush, brother. Do not trouble yourself unduly. These outbursts are becoming more regular. You are becoming ever more sensitive, are you not?”

The elder brother held up his hand. “In truth, the story relates to the thickness of the glass. After the placement of the fabled pea in its original case there were strange events and, likewise, strange conclusions made. A number of visitors complained of aching heads and sensations of disorientation and fatigue upon leaving the museum. A cleaning maid was left bruised all over one side of her body, without sensible explanation. The curator of fifteen years was found hanging from his neck in his office.”

The younger brother gasped. “And how could these events relate to the case?”

“Precisely so. Here, take my handkerchief. You are perspiring.”

The younger brother mopped his forehead. He leaned more heavily on the stick. “It is a nonsense.”

“It is. And yet, is it not compelling also? Think of it. That princess—”

“Perhaps. Think of that princess, lying upon her twenty mattresses and twenty eiderdowns. Think of her discomfort. The pea was the cause, was it not?”

“But it was a fable! It proved only that she was of a sensitive nature. That is all.”

“That is all. But perhaps there are others of a similarly sensitive nature. Those visitors. That cleaning maid. The old curator.” The elder brother watched the younger brother carefully.

The younger brother gazed at the pea in its cabinet, then he shook his head to clear it. “We should leave and find an inn. We must decide just how this proposed business will operate. I have many thoughts and ideas about such an enterprise.”

The elder brother did not speak for some time. He bent closer to the pea behind its wall of glass and then, without turning, spoke in a hushed tone. “Do you agree that the thing is malign?”

“Your story would indicate so, if taken seriously. I have received no medical teaching. I could not say.”

“But you feel it, as those others did.”

The elder brother rose and turned. “You are stooping and leaning heavily upon that stick. You are pale. You are sweating, brother.”

“Do you agree that it is malign? And do you accept that you, like those other souls, are sensitive enough to be aware of it?”

The younger brother stared at the pea. He said nothing.

“You are quite right,” the elder brother said after a sigh. “We must find an inn before dusk. Come, let us discuss our business arrangements while you regather your strength.”