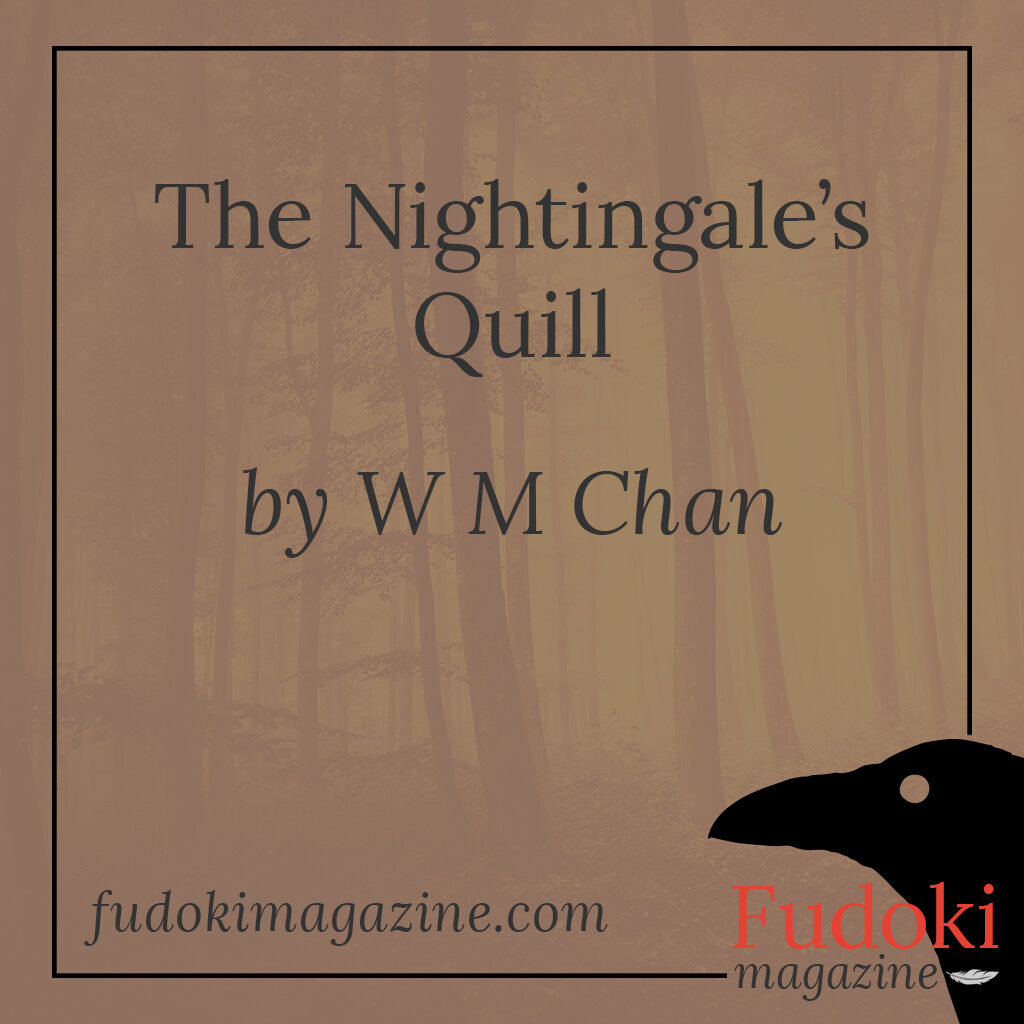 Parchments were piled high, each stack in the store a precarious lotus bloom. A girl navigated her way through the towering maps and their sharp edges. The cartographer’s daughter Ling reached her cosy nook and settled in with her magic quill and ink.

Her father Kam, travelled both as an explorer and tinker, collecting new places and their curious trinkets. He only stood still by their counter. It was there Yau, a po-faced man, stormed with shock; why was there no treasure map in stock? Yau believed he deserved the lion’s share and had hoarded when the drought bore down. He did not care, he wanted more. Ling heard her father speak of the scorched season past.

“Remember when the earth was parched and the waters fermented, when the last fish gasped, and the birds fell silent?” He gently urged Yau to be thankful. “There is no such thing, no buried goods, except the soil that yields our food. Help the village bring in fresh fields, a feast beneath the harvest moon. Join us singing nature’s praise that grows abundant fortune.” It was no use, Yau would not listen to reason.

“You are keeping a secret, a map hidden from me,” Yau snapped, “Yau means ‘to have’ and I mean to have that!”

Ling shook her head when she thought that the loud customer had left. The sunlight was dimming by the window, so she drew swiftly with nimble fingers. She did not see the disgruntled customer who lingered outside. Surprised, Yau gawped as a live bird hopped away from her ink, no longer caged by the page. It flew out through the open pane and over his head; it belonged in the throng of the evening song.

Her quill was made from a nightingale’s feather, a precious gift from her father. It had come from the bird that had befriended the Emperor. It tickled her nose with the promise of freedom and the music of fate. There were many more nightingales carolling in the forest of late. She plunged into her work, etching trees and waterfalls, burgeoning in place. She was unaware of the supper calls coming from upstairs.

Her family lived above the curling atlas tomes, Ling liked to think, in their own floating world. The summons for dinner hit a critical tone. It was her mother. Her voice became a crescendo thrum that rhythmically struck and beat her eardrums. Ma did not appreciate having to wait.

“Your favourite fish is being dished and very soon it might be missed,” it was not a coincidence; her mother relished cooking her preference in plates.

“Ah Ma, I understand!” Ling called back but did not move or stand at all.

“I know, I know!” Ling said, as she fled up the wooden stairs to their quarters.

“Finally,” her mother said, “my obedient daughter, we are lucky that this fish chose to dance in our waters,” this was another recently granted wish. The once barren shores embraced returning schools of silver fish. Her father smiled; the timing was suspicious. The villagers had rejoiced, it really was quite auspicious.

Ling sat down to savour the snow-white rice and flakes of fish that steamed her face. In a warm ginger cloud, she delighted in every bite. Her mother’s tan eyes shone at Ling’s furious appetite.

As the day wound down, their clockwork bird with trumpeting beak and baton tail, heralded the time of the nightingales. Its ruby eyes flickered above the sunset hearth, and as the family slept, it restored their health.

Yau returned the next day, intent on bargaining with Ling’s father. He offered half of his wealth in exchange for the feather. When they declined, Yau lashed out at her father and her mother too, but their bird of chimes healed them through, as only time can tell and do.

Every day, her father fought Yau, and he protested. Kam only relented when his daughter’s life was contested. So with a heavy heart he asked Ling to give up her quill.

“It is only a feather; we will find you another. I promise you that, together we will,” her father sighed with his white lie.

The enchanted quill would not stay in Yau’s greedy grip and slipped in spoilt hands as soft as spilt milk. He wanted gold without any toil. No matter how well he sketched, the pictures smudged; life refused to rise from the void of his sludge. Eventually, Ling was fetched. The demands he whined:

“I want a gold mountain and a gold mine. I want all the riches I can possibly find!”

But she ignored them. Instead, she drew a scrolling sea, with elegant waves that rose and bored him. She inscribed a watch of nightingales that soared above all men. In the end she scrawled a gleaming peak across the ocean, surrounded by fish that trawled in the open. He did not need fish, he had them in tins; he did not heed the shiver of fins.

Yau grimaced a greedy grin, he ordered a ship and a gale of high winds. When the mast was raised, he immediately set sail. The nightingales swooped and took up a terrible wail. Their lullabies died as they hymned a funeral march, reading his will before his last rites. They harried mean Yau, they pecked and pecked at his eyes. Blind and adrift in the billowing swell, it could not get worse, until he fell.

Ling’s favourite fish and art were the sharks, in truth. From her quill they had spawned with ruthless jaws. Blood was drawn with the sharpest tooth.

“Oh no, oh no, if you don’t come up, you won’t grow old,” Ling sang, quietly finishing her mother’s song, “I hope you found your fool’s gold.”

3 thoughts on
“The Nightingale’s Quill”